I recently returned with some coworkers from 3 weeks of field work in Desert National Wildlife Refuge, 25 miles northwest of Las Vegas, Nevada. We were surveying the small mammals (rodents, bats, and other mammals that are generally less than 1 foot long) that live in the refuge, as it had not been thoroughly surveyed in the past. We used traps that catch the animal alive, which allowed us to decide which animals to release and which to keep for the Academy's mammalogy collection. The majority of my field experience involves birds (like this), so it was fun to try my hand at mammals. However, today I'm not going to talk about the fine details of mammal trapping; instead, I want to test your mammal identification skills. Specifically, mammal track identification.

The desert is a great place to look for tracks because the soft sand holds them well. My colleagues and I had fun finding these tracks and trying to figure out which animals were recently nearby. It's also a great way to figure out where to set your traps if you're targeting specific types of animals.   So let's get started! On our first day we were working in soft sand dunes, where we found some of the best tracks: 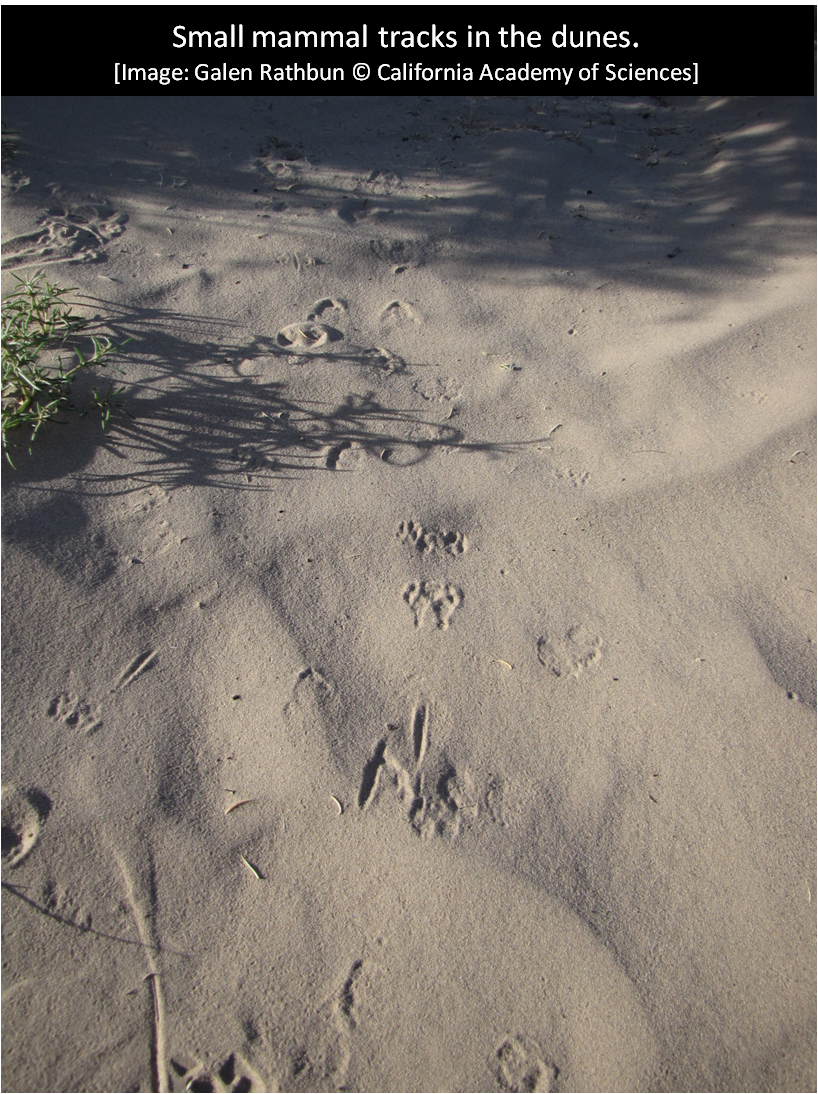 You can clearly see small sets of feet in the center of the photo, with a small line at the very back. The front feet look to be smaller than the back feet, which have a large heel. Can you guess what it might be? 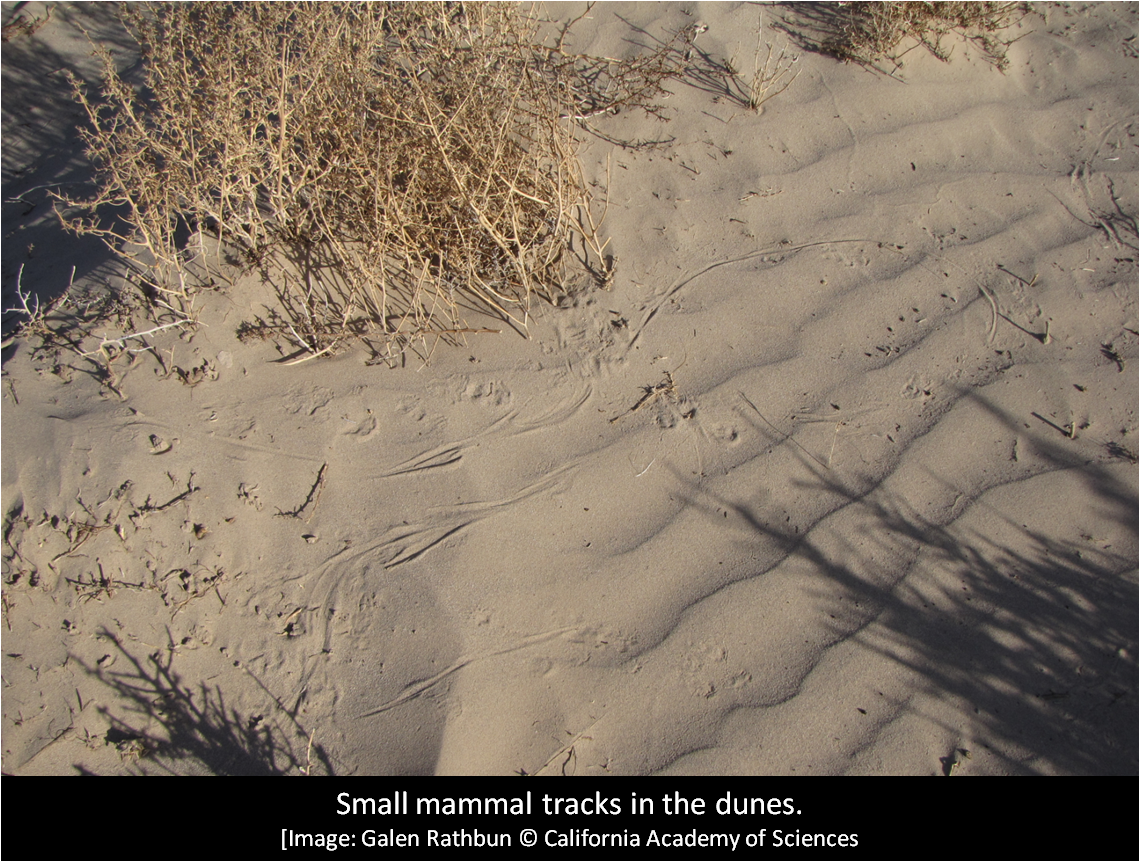 This photo shows tracks from the same species, but with longer brushy lines dragged throughout. Any ideas? Think of a small mammal with larger back feet than front (for its strong back legs) and a tail that would make those lines in the sand. It's... 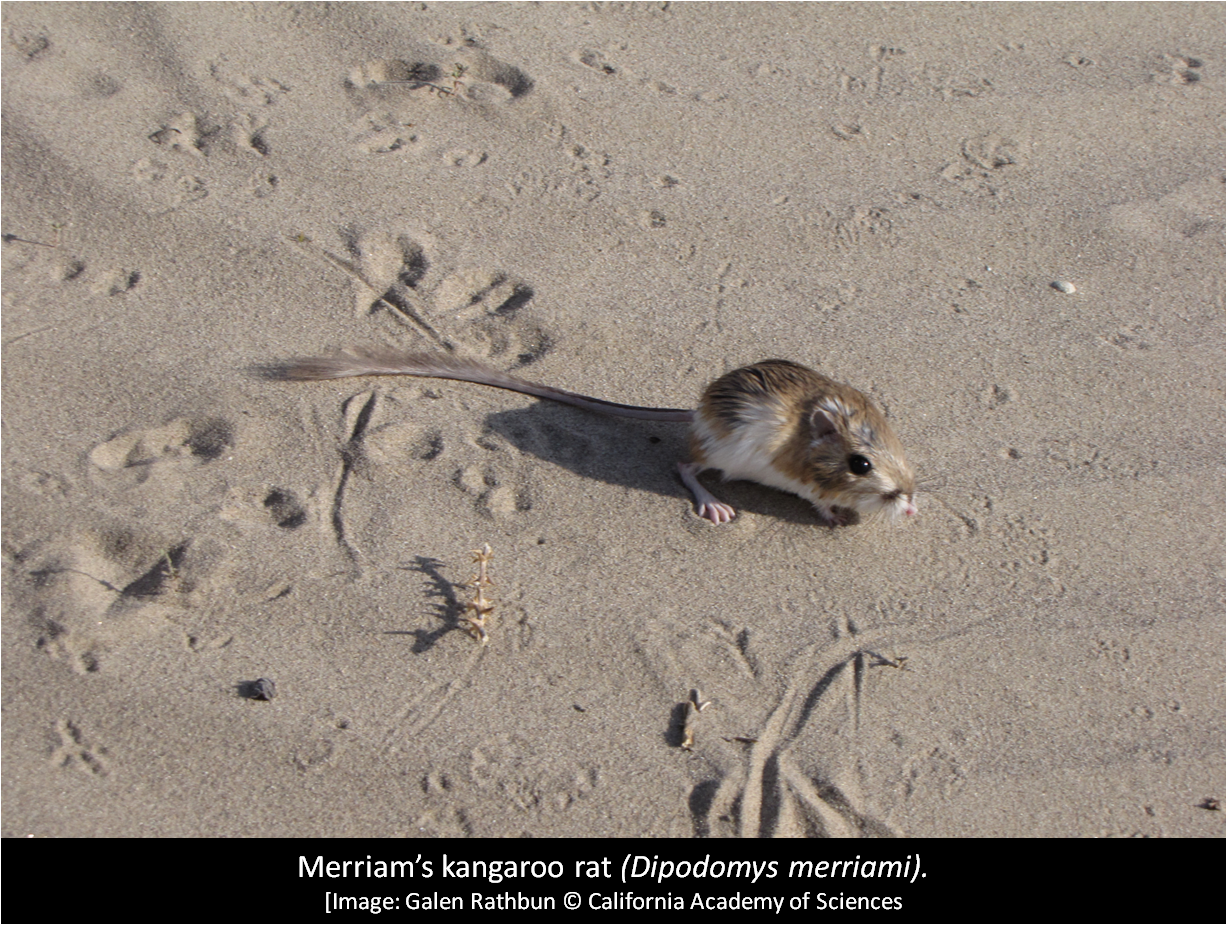 a kangaroo rat! The Merriam's kangaroo rat (Dipodomys merriami) was the most common kangaroo rat species we found throughout the refuge. Kangaroo rats live up to their name by hopping around on their back feet, though they do walk around on all fours as well. They're not related to kangaroos, but are rodents like other rats and mice.   The next set of tracks comes from the gravel paths that wound around one of our campsites. I noticed that these paths were used as a highway of sorts for a particular animal. It might be difficult to guess by the photo, but take a look: 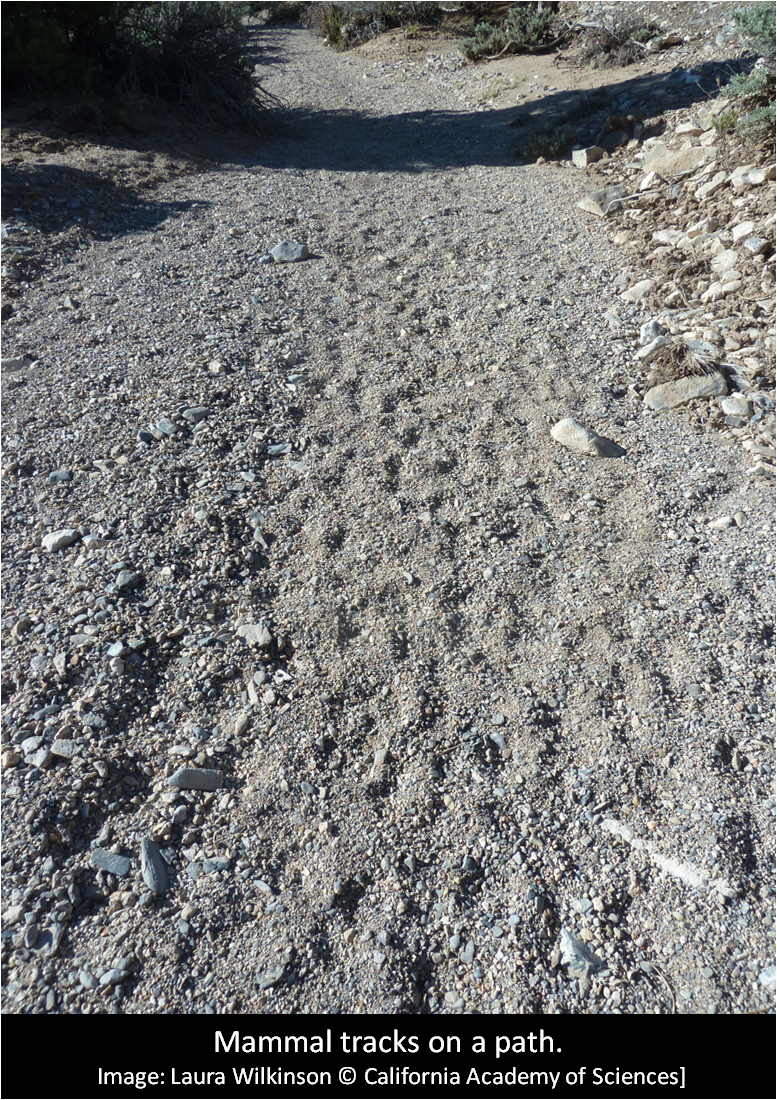 These tracks, like those from the kangaroo rat, are also from an animal with large back feet and smaller front feet (good for hopping!) It's... 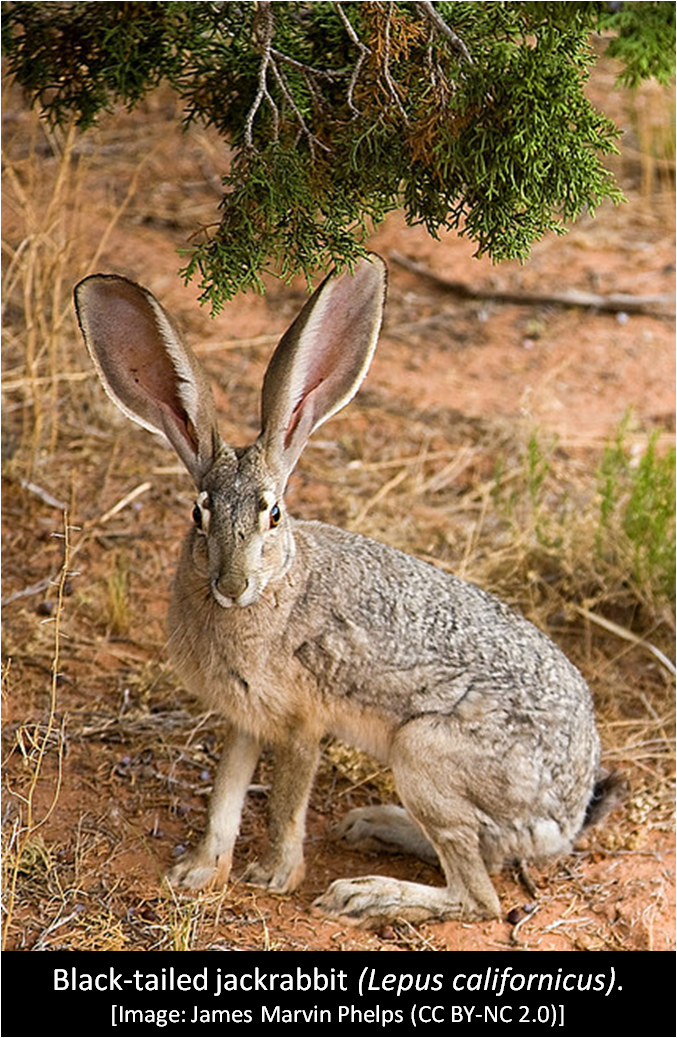 a Black-tailed jackrabbit! We saw quite a few of these around this campsite. Since we were camping at an established site, the jackrabbits knew that having people around meant finding good food. They chewed up one of our cardboard boxes and chewed on a few wooden boxes we had. I also woke up to one chewing through one of my tent guy lines. It was hard for me to get annoyed with such a cute animal, though.   Around this same campground, there were lots of tracks of the largest mammal I saw on this trip: 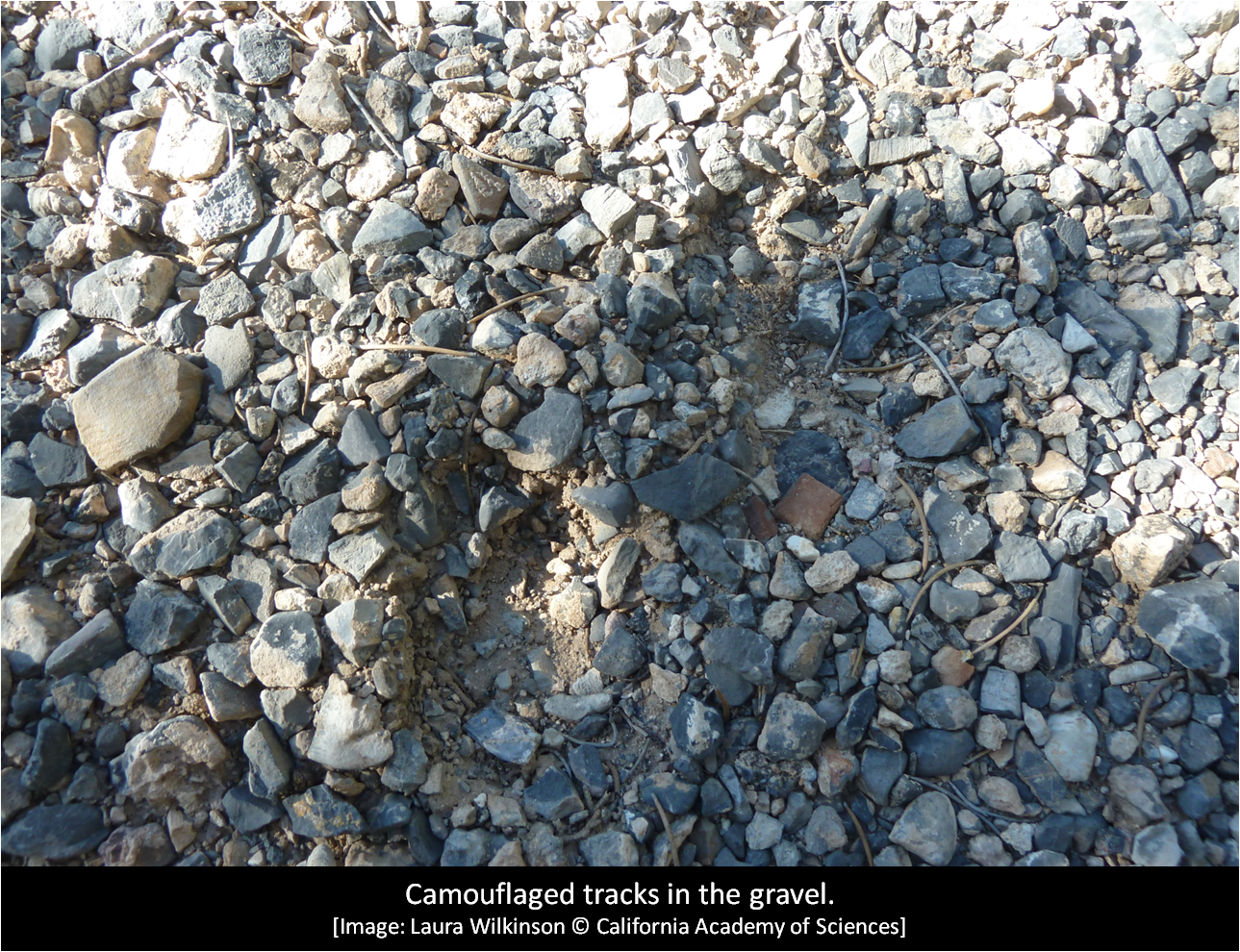 It's hard to see the definition in the gravel, so I've outlined the shape for you here. 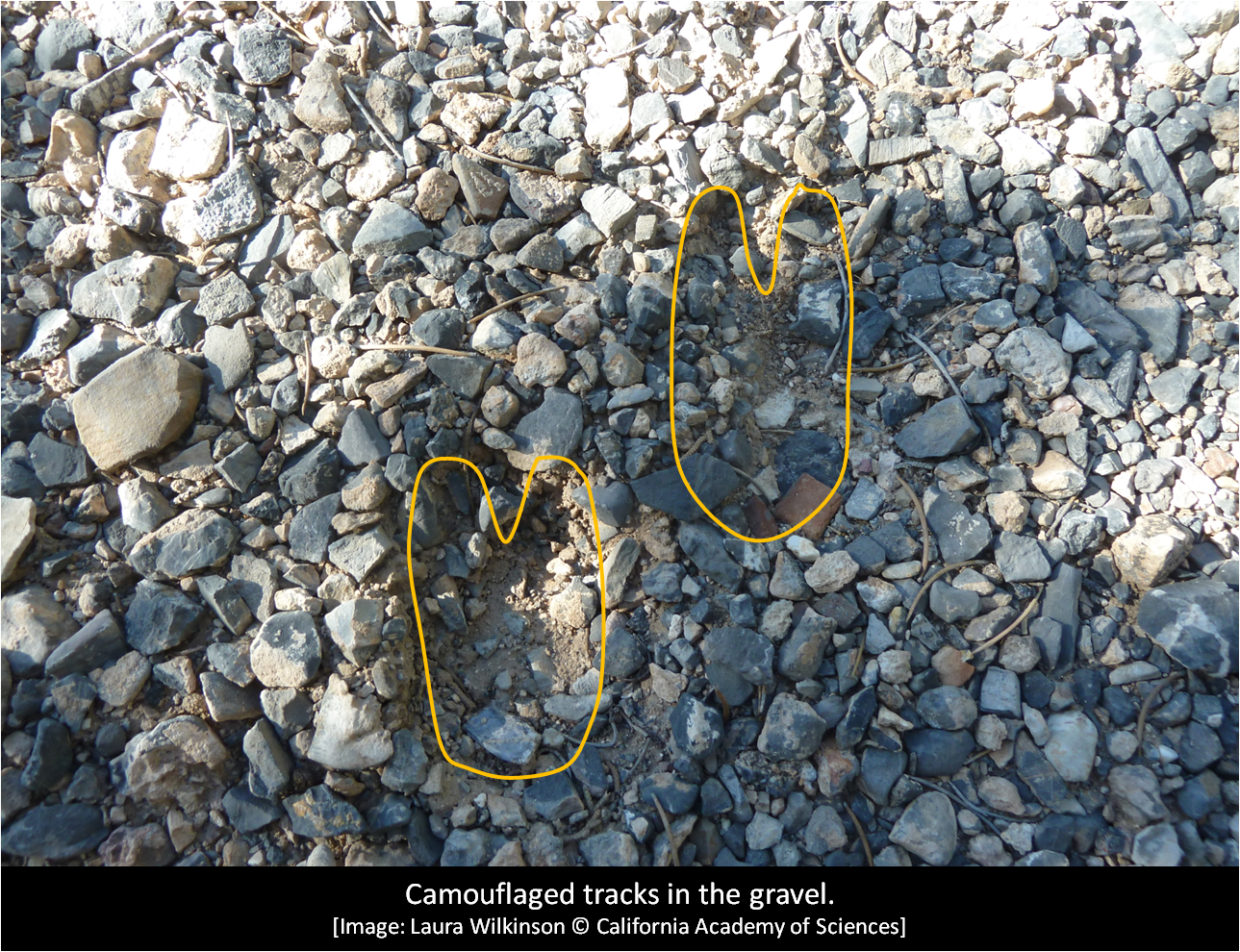 Those definitely look like hooves to me. Any guesses on the species? It's... 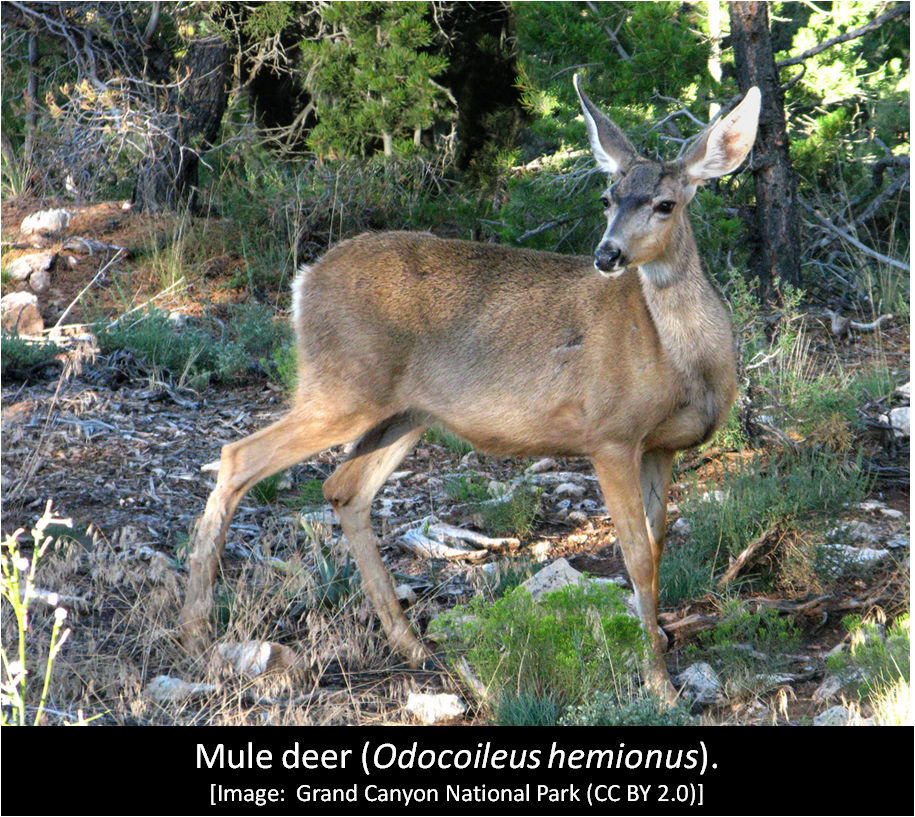 a mule deer! I saw a few of these walking towards me down a trail - it took them a while to notice me, but then took off immediately.   As a parting shot, here's a photo of some very cool lizard tracks. I'm no herpetologist so I don't know the exact species, but I love that the tail drags a line between the footprints. 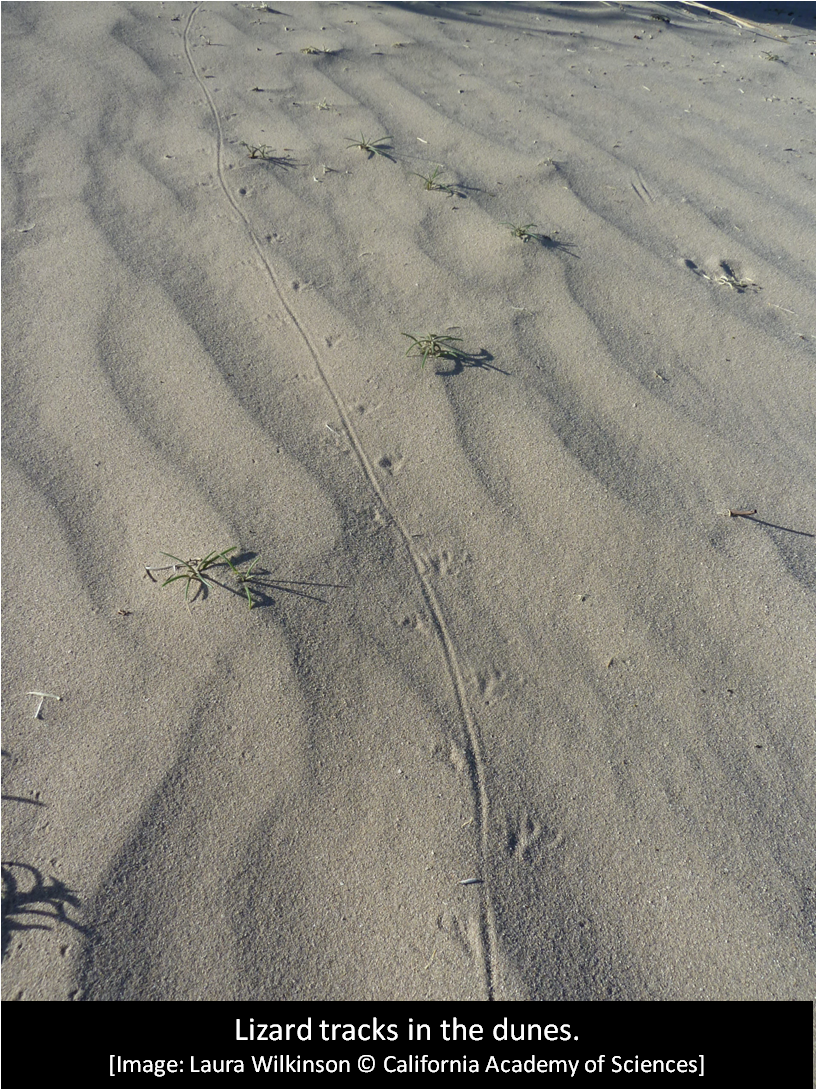 Next time you're out walking around, take a look for mammal tracks! You might be surprised at the diversity you can find.