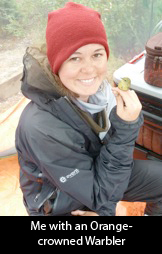 I recently returned from a month of field work in Alaska where I was collecting blood samples from birds at various latitudes in the state. I will analyze these samples as a part of my Masters Degree thesis at San Francisco State University under Dr. Ravinder Sehgal, where I am studying avian malaria and the ways it may spread in the Arctic due to climate change. Like human malaria, the avian malaria parasite is spread via insect vectors such as mosquitoes; however, it does not always appear to affect birds as drastically as the human version affects us. Although not all infected birds die, studying the change in prevalence of the parasite in birds will serve as a model for how human malaria may be able to spread into new territory due to climate change. We predict that as the climate warms in Arctic regions, where avian malaria historically was not present, temperatures will become suitable for mosquitoes to survive in, allowing the parasite to be passed on to birds in that region. Combined with blood samples from the past 12 years, my lab has over 2000 samples from throughout Alaska that I will be screening for malaria and comparing with climate data to look for patterns.

In the field, I collected birds by using mist nets, a series of 12 meter long fine mesh nets commonly used to collect birds. The nets are placed in areas where birds commonly fly. The birds cannot see the net and become tangled when they fly into it. Once a bird is caught, I remove it, bring it back to our processing station (a tent to keep the mosquitoes out), and place an identification metal band on the bird’s leg. Next, I take a small blood sample from the brachial vein in the wing, and then release it unharmed (other than a small prick on the wing). The band does not inhibit the bird from functioning as normal, so no animals are injured in this process. 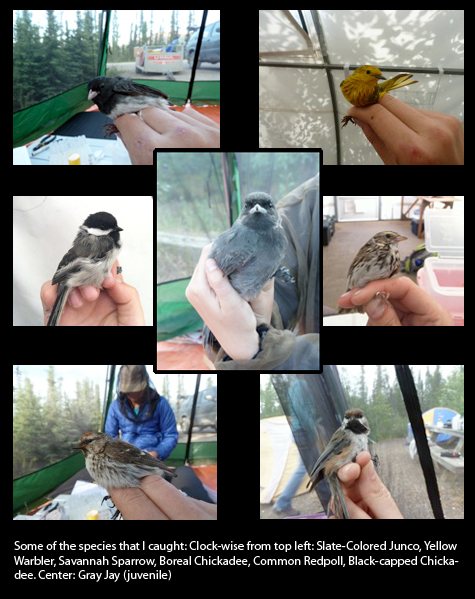 I traveled to Alaska with a team from UC Davis who is trying to figure out which species of mosquitoes are actually transmitting malaria to the birds. We had a great trip even though the weather wasn’t very cooperative, and eventually got used to 24 hours of daylight. Now that we’re back in California, we are processing all of our samples. Hopefully we’ll get some interesting results!