Last week Carissa wrote about the Plastisphere and how it has become a floating habitat for microbes.  But what happens when a larger animal comes into contact with these plastics?  The Laysan Albatross is one species negatively affected by plastics in the oceans.

Adults arrive in November to court, mate and lay an egg, and the chick will fledge and leave Midway in July.  This long process means that most birds will only lay one egg per breeding season.  After a few weeks together, the nestling is left alone on the island for the next few months while both parents forage at sea.  Unfortunately an increasing amount of the “food” periodically brought back to these chicks is actually bits of plastic.  The Great Pacific Garbage Patch can be found in the same area that Laysan Albatross forage for food and these plastics are making their way back to land in the stomachs of birds.

Why would a bird intentionally ingest plastic?  Albatross primarily eat invertebrates such as squid and jellyfish and shredded plastic bottles floating on the water can resemble either of these foods.  Plastic of various colors and sizes are mistaken for other marine invertebrates as well, and scooping up the pieces the Albatross fly back to Midway and feed it to their young.  Many nestling Albatross are unable to survive due to malnutrition or punctured stomachs from the plastic they are fed. 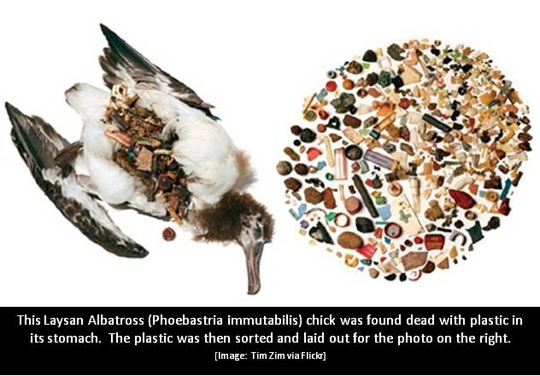 Although not currently considered a threatened species, over time this could

become problematic for the Laysan Albatross population as a whole.  If each pair is only laying one egg a year and that chick dies before leaving the nest the number of chicks replacing older adults could dwindle.

Plastic ingestion is a scary thought, but even when it is not being incidentally eaten, plastic can still affect birds through entanglement.  Plastic entanglement is a problem not only on Midway Atoll, but even closer to home here in San Francisco.

This Common Murre (Uria aalge) was found on Ocean Beach caught up in netting.  The netting has actually wrapped itself around the wings and feet in such a way that the bird would not have been able to fly or walk.  I prepared the bird as a study skin to have a record of the way plastics can negatively impact our avian community.  Many animals can have limbs or even necks caught in plastic bottles, plastic rings that hold soda cans or even plastic bags.

While San Francisco has already banned plastic bags, there are many other items that we throw away or recycle that can accidentally end up in the ocean.  Unless you already have your next arts and crafts project mapped out, it’s always good to pause and think about whether you need that extra packaging or plastic bottle.  Sometimes plastic can be “reused” in ways we had not anticipated!