Last year, we reported on the “lost years” of young loggerhead sea turtles on the East Coast. But as we all know, things are done a little differently on the West Coast, so today we give you little lost loggerheads found, West Coast-style. Ready?

Loggerhead turtles, like many other species of sea turtles, are born on one beach and then migrate thousands of miles (or thousands more kilometers) elsewhere, with the females eventually reappearing on the same beach, years later, to deposit their eggs. But for their first several years, the turtles are in the open ocean, hard to track and hard to find, so scientists have dubbed those the “lost years.”

Last year, scientists described a method of attaching small tracking devices to East Coast turtle hatchlings to uncover the mysteries of these early months and years, with success. The team found the turtles traveled with currents, staying near the sea surface for warmth, and headed from their birthplace in Florida into the Sargasso Sea.

Here on the West Coast, the loggerheads were found quite by accident. A NOAA (National Oceanic and Atmospheric Administration) Fisheries marine mammal survey crisscrossing waters off the coast happened onto a large concentration of lost-year loggerheads about 200 to 250 miles (300 to 400 kilometers) off southern California. Within several days, researchers spotted more than 70 young loggerhead turtles less than 20 inches long, about the size of a laptop computer. (So cute!)

These little loggerheads started their lives on a different continent—in Japan, to be precise—and then disappeared into the north Pacific. Researchers understand that eventually, these young turtles will reach a rich foraging area about 6,000 miles (nearly 10,000 kilometers) away from their birthplace, off Baja California.

“This is the first time we’ve encountered an aggregation of these lost-year turtles far offshore of California,” says NOAA’s Jeffrey Seminoff, a marine ecologist who leads the Marine Turtle Ecology and Assessment Program. “It looks like a very important area for turtles that have just crossed the Pacific.”

Seminoff and his team believe the West Coast loggerheads are not too different from their East Coast brethren. The scientists suspect the juveniles follow currents that carry them from Japan, like a giant conveyor belt across the north Pacific, then travel south along the West Coast to stay in warmer waters.

In southern California, the team documented the juvenile turtles along temperature margins where warm eddies swirl up against colder waters, creating unusually productive zones rich in food. Similar temperature features probably occur in the eastern Pacific every year, providing migrating turtles with the food they need for rapid growth early in their lives.

NOAA Fisheries scientists are now planning to use the East Coast tracking methods to chart the West Coast loggerheads’ migration route more completely. This information is vital for the endangered turtles. Improved data about their route and timing can help NOAA Fisheries manage West Coast fisheries to protect the loggerheads, who often die from entanglement in certain kinds of fishing nets. “If we can predict where loggerheads are going to be and when, we can tell where it’s safer to fish,” Seminoff says. “This is a big step forward in terms of being able to do that.” 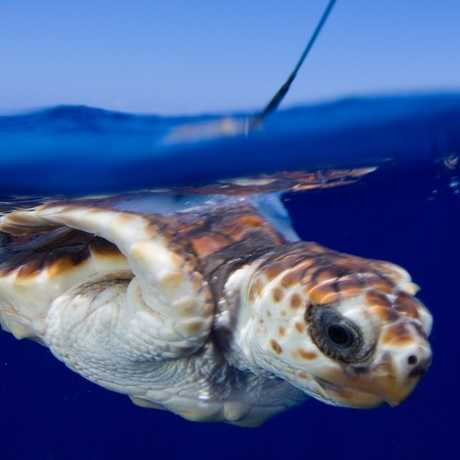 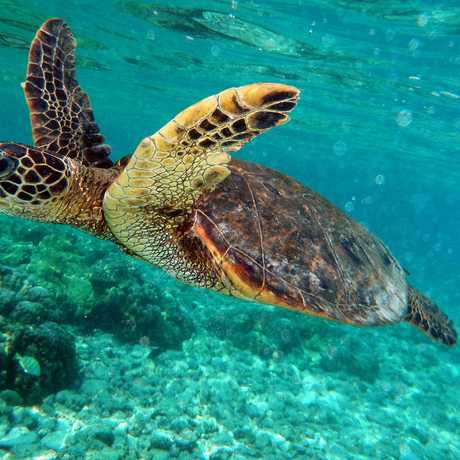 Sea Turtle Corridors
How can we protect sea turtles and other migratory ocean animals between marine protected areas?