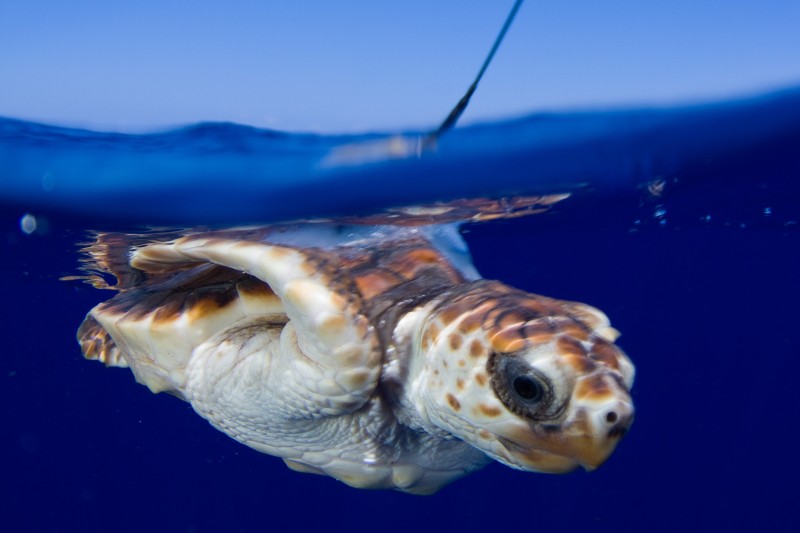 Loggerhead turtles begin their lives buried in the sand. As they hatch, the tiny marine reptiles make their way to the vast ocean and disappear. Or disappear for a little while, anyway, since they return to their birthplace after a few years.

Lacking substantial evidence, researchers have long speculated about the destination of the loggerhead sea turtles that begin their life on the Atlantic coast of Florida. While adult sea turtle movements are tracked by satellite tags, baby sea turtles were simply too small to support the size and weight of existing tags.

Enter biologist Kate Mansfield, of the University of Central Florida, and her colleagues. The team used cell phone technology to develop smaller tags and found solar cells that could replace a heavy battery. They also created a new method of attaching the tags safely to the animals. Strangely enough, the process involves using a non-toxic manicure acrylic, old wetsuits, and hair-extension glue.

After ensuring the tags would not harm or alter the animals in their natural environment, Mansfield and her crew fitted 17 baby turtles with the devices and followed their movements over the next 27 to 220 days, depending on how long the tags stayed attached to each of the juvenile loggerheads.

The team discovered that the turtles remain in open, oceanic waters (traveling between 124 miles to 2,672 miles) off the continental shelf and remained at the surface of the water as predicted. However, the study found that the turtles do not necessarily remain within the currents associated with the North Atlantic subtropical gyre, as had been suspected. The researchers’ data suggest that turtles may drop out of these currents into the middle of the Atlantic or into the Sargasso Sea.

Because the turtles mostly stayed at the sea surface, they were exposed to the Sun’s energy. Sensors in the satellite tags recorded that their shells registered more heat than anticipated. This increase may be due to the Sargassum seaweed in the area.

The findings, published last week in the journal Proceedings of the Royal Society B, are important because the loggerhead turtles are an endangered species, and understanding their habits can benefit their protection.