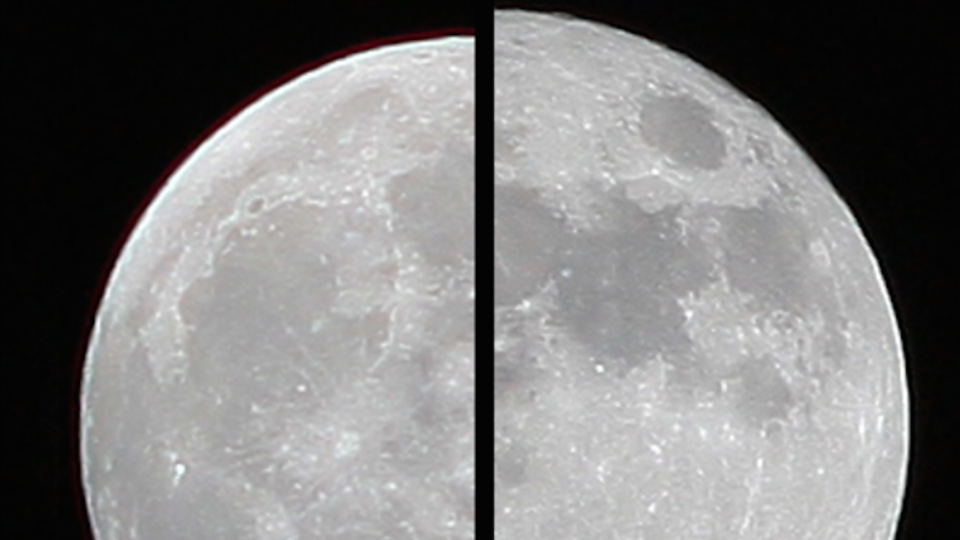 What’s all this fuss about a Supermoon next week? First, the term “supermoon” comes from a non-scientific context (which is why a lot of astronomers hold their noses while saying it). Many websites promote the “supermoon” with telephoto trick-shots of a gigantic full Moon rising behind some landmark that makes people think the Moon is going to be humongous, but that’s just clever photography that can be done anytime, like this.

I frequently find myself cautioning people that the superness of a “supermoon” isn’t something that’s easily noticed. As this article says, the difference in diameter between this occurrence and other full Moons is 14 percent (or one-seventh), which most people wouldn’t perceive unless they were seeing an average full Moon and a “supermoon” at the same time and could compare them.

While side-by-side images might make the difference seem pretty obvious, many forget that the full Moon is so far away that it’s typically only a half-degree in apparent diameter, which is really tiny—you can cover it with an aspirin tablet or a pencil eraser held at arm’s length, and a difference of one-seventh of THAT is a really tiny part of something that’s ALREADY really tiny. This difference doesn’t call much attention to itself and would escape the notice of most casual observers.

Even the claimed 30 percent increase in brightness is hard to compare with that of the full Moon of any other month without a photometer to measure the light.

Another thing which tends to confuse people is when they should go to see the “supermoon,” as if there’s anything really different to be seen (I’m such a fuddy-duddy). The exact time of perigee is 3:30am PST on Monday the 14th, which is a few hours before dawn and when the Moon is descending in the west. Full Moon occurs two hours later, at 5:52am. Because of the confusing publicity surrounding the “supermoon,” many people think the best time to look for it is at moonrise (when the Moon always looks big, right?). Actually, the apparent size of the rising full Moon has nothing to do with the “supermoon”—that’s a totally separate phenomenon known as the Moon Illusion, which happens every full moon, regardless of whether it’s “super” or not. Time-lapse photography, however, shows that the Moon doesn’t really change its size at all, so the “Moon Illusion” is a purely psychological effect.

Bottom line: Anything that gets people looking up at the sky is a good thing, and we’re happy to help explain what’s going on so people can really appreciate what they’re seeing. Enjoy the view of the Moon—super or otherwise! –Bing Quock

The past couple of years have been a mixed bag for the private space industry. Two years ago, on October 28, 2014, Orbital ATK lost an Antares rocket and its payload of supplies intended for the International Space Station (ISS). Meanwhile, not only did rival SpaceX suffer a similar calamity eight months later, on June 28, 2015, but it suffered another rocket loss without even leaving the ground, during preparations for a preflight test on September 1, 2016.

Sir Richard Branson’s Virgin Galactic company has slowly been recovering from the loss of its VSS Enterprise test vehicle, which crashed in October 2014 as a result of pilot error. In February of this year, it rolled out its second spacecraft, VSS Unity, which made its first captive flight in September.

No one ever said rocket science is easy.

On October 23, Orbital ATK returned to flight, successfully launching a rocket with newly built engines rather than relying on leftover engines from Russia’s attempts to land on the Moon almost a half-century ago. Its automated Cygnus cargo ferry delivered about 2,300 kilograms (5,100 pounds) of supplies to ISS.

Recently, SpaceX announced that its investigation had uncovered the cause of the September rocket explosion and intends to return to service by the end of the year. The pressure is on SpaceX, as it had already announced plans to begin flights of its Crew Dragon spacecraft in late-2017.

One continuing success story has been that of Blue Origin, which has repeatedly flown and landed its New Shepard reusable rocket, most recently demonstrating its emergency escape system. The expectation had been that the rocket itself would be lost in the attempt because the thrust of the escape system would knock it off balance. However, not only did the ejected capsule survive, parachuting safely to the ground, but so did New Shepard, landing safely for the fifth and last time. The tough, little rocket has more than proven its reusability, and will be retired.

Yet to fly is Boeing’s Starliner, which received the lion’s share of NASA’s commercial crew program funding, but which isn’t expected to make its first test flight until December 2018. Also waiting in the wings, so to speak, is Sierra Nevada Space Systems and its Dream Chaser mini-shuttle—a miniature lifting body whose design eschews the conventional space capsule for a shape more along the lines of NASA’s retired Space Shuttle. Sierra Nevada expects Dream Chaser to make its first flight in 2019.

Where are those applications for orbital traffic cop? –Bing Quock

A New Way to Study Neutrinos

How do you study neutrinos? These subatomic particles with no electric charge and hardly any mass are elusive. While 65 billion neutrinos pass through the area the size of a fingernail here on Earth every second, they’re nearly impossible to detect. But they hold important clues to understanding why the Sun shines, what triggers supernovae, and how the Universe began.

The neutrinos from our parent star are so puzzling that decoding their properties has already won a Nobel Prize. Nuclear reactions in the Sun’s core produce neutrinos, and they rarely interact with other particles, so they escape the Sun easily, bringing us information about the deep solar interior. To study them means to trap them, and so far that has involved massive equipment and expenses.

At present, the gold standard for neutrino detection is Japan’s Super-Kamiokande, a magnificent $100 million observatory. In use since 1996, Super-Kamiokande lies 1,000 meters (3,280 feet) below ground and consists of a tank filled with 50,000 tons of ultra-pure water, surrounded by about 13,000 photomultiplier tubes. If a neutrino enters the water and interacts with electrons or nuclei there, it results in an optical shock wave, a cone of light called Cherenkov radiation. This light is projected onto the wall of the tank and recorded by the photomultiplier tubes. (The Nobel-Prize-winning challenge was to figure out why we detect only one-third to one-half as many neutrinos as originally predicted.)

But set-ups such as Super-Kamiokande cost a lot of money to build and operate. Maybe physicists could save some cash? Stanford researchers have now come up with a new option to detect neutrinos, “missing” or otherwise, using radioactive decay fluctuations. Physicists long thought that the decay rate of any radioactive element was constant, but observations showed otherwise. The scientists ran several experiments and found that the radioactive decay fluctuations matched patterns they had found in Super-Kamiokande neutrino data and elsewhere, indicating a one-month oscillation attributable to solar rotation. The team, publishing in Solar Physics this week, claims that neutrinos from the Sun are directly affecting beta decays.

Studying beta decays could mark the beginning of a new field in neutrino research and solar physics with the possibility of bench-top detectors that would cost thousands rather than millions of dollars. “If we’re correct, it means that neutrinos are far easier to detect than people have thought,” says lead author Peter Sturrock. “Everyone thought that it would be necessary to have huge experiments, with thousands of tons of water or other material, that may involve huge consortia and huge expense, and you might get a few thousand counts a year. But we may get similar or even better data from an experiment involving only micrograms of radioactive material.” For a lot less! –Molly Michelson

Brown Dwarf Oasis in a Desert

With new tools come new finds. Take gravitational microlensing. Two months ago, we wrote here about how astronomers are using this technique to find exoplanets and other low-mass and dark orbiting bodies far, far away. Now scientists have used the technique to find a brown dwarf orbiting a small star in a region where brown dwarfs are seldom found.

One way astronomers can better understand the properties of the lensing system is to observe the microlensing event from more than one vantage point. In this case, the team used both the Spitzer and Swift space-based telescopes. “Anytime you have multiple observing locations, such as Earth and one, or in this case, two space telescopes, it’s like having multiple eyes to see how far away something is,” says the study’s lead author, NASA’s Yossi Shvartzvald. “From models for how microlensing works, we can then use this to calculate the relationship between the mass of the object and its distance.”

Brown dwarfs are thought to be the missing link between planets and stars, with masses up to 80 times that of Jupiter. But their centers are not hot or dense enough to generate energy through nuclear fusion the way stars do. By combining data from the telescopes on the microlensing event where the brown dwarf passed in front of its star, the team determined that the newly discovered brown dwarf is between 30 and 65 Jupiter masses. They also found that the brown dwarf orbits a K dwarf, a type of star that tends to have about half the mass of the Sun. The researchers found two possible distances between the brown dwarf and its host star, based on available data: 0.25 AU (or astronomical unit) and 45 AU. The 0.25 AU distance would put this system in a so-called brown dwarf desert, where brown dwarfs are rarely found.

“We want to understand how brown dwarfs form around stars, and why there is a gap in where they are found relative to their host stars,” Shvartzvald explains. “It’s possible that the ‘desert' is not as dry as we think.” –Molly Michelson 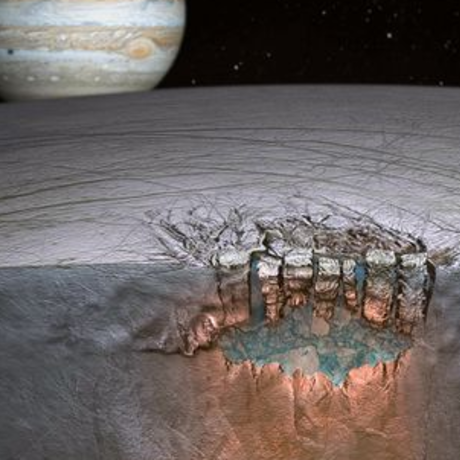 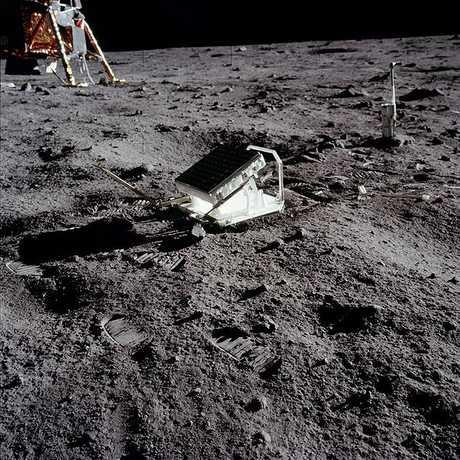 Measuring Moon Distance
How do we measure the distance between Earth and the Moon?
image-standard 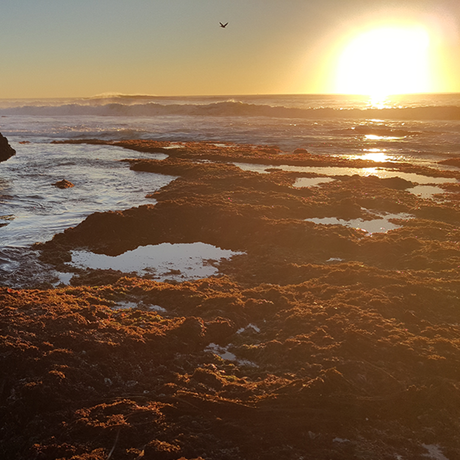 Resource page for topics covered in Sun, Moon, and Seas.