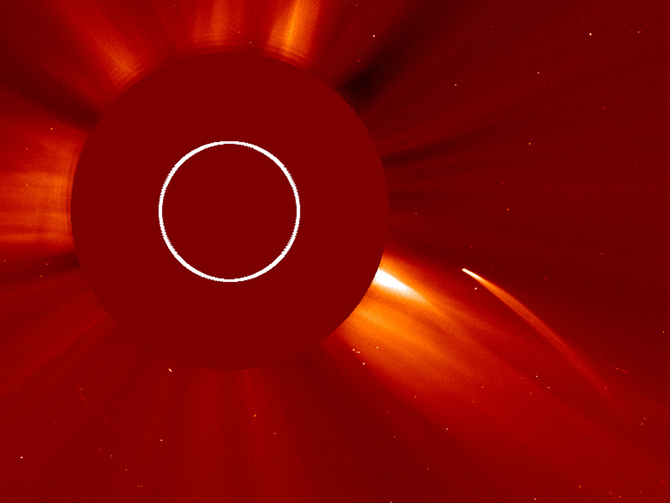 The third Thursday of every month, the Morrison Planetarium hosts “Universe Update” at the 6:30 planetarium show during NightLife. I select my favorite astronomy stories from the past month, and I give a brief run-down of current discoveries while taking audiences on a guided tour of the Universe. As you may or may not know, the planetarium sports a three-dimensional atlas of the Universe, so we can take you places virtually while talking about the latest astronomy news.

I always start at Earth and work my way out to cosmological distances, so I’ll list the news stories in the same order—from closest to farthest from home.

Fourth graders from the Emily Dickinson Elementary School in Bozeman, Montana, proved themselves more creative than NASA engineers! Crazy rocket scientists named their two lunar-orbiting spacecraft “GRAIL-A” and “GRAIL-B” (where, of course, “GRAIL” is an acronym, which stands for “Gravity Recovery and Interior Laboratory”). The elementary school students selected the names “Ebb” and “Flow,” which NASA selected as the winning contribution in a nationwide contest. The GRAIL mission measures the ebb and flow of gravity, in a sense, as the two spacecraft orbit the Moon and measure variations in its gravitational pull. From the GRAIL website:

As they fly over areas of greater and lesser gravity, caused both by visible features such as mountains and craters and by masses hidden beneath the lunar surface, they will move slightly toward and away from each other. An instrument aboard each spacecraft will measure the changes in their relative velocity very precisely, and scientists will translate this information into a high-resolution map of the Moon's gravitational field.

A little farther from home, new reports from a comet impact on the Sun that took place last July. We like to describe comets as “dirty snowballs,” and as you might imagine, a comet getting too close to the Sun stands a snow ball’s chance in… Well, a million-degree plasma irradiated by incident solar flux. The comet evaporated over a period of about 20 minutes, and as described in a paper that appears in today’s Science magazine, it probably measured between 150 and 300 feet across and had a mass equivalent to an aircraft carrier. According to Karel Schrijver, a solar scientist at Lockheed Martin in Palo Alto, the comet moved speedily to its demise: “It was moving along at almost 400 miles per second through the intense heat of the Sun—and was literally being evaporated away.”

A fair bit farther from the scorching heat of the Sun, the Dawn spacecraft is sending back gorgeous images of the asteroid Vesta, including this gorgeous snapshot of a crater on the asteroid’s surface. Dawn has entered a low-altitude orbit that gives it a close look at the potato-shaped planetoid. Learning more about such objects should help us better understand the formation of the solar system, and after its stay at Vesta, Dawn will move on to Ceres, the dwarf planet (like Pluto) that resides between the orbits of Mars and Jupiter.

Beyond our own solar system, of course, we are rapidly discovering planets in orbit around other stars: these extrasolar planets (or exoplanets) now number in excess of 700, and astronomers find more all the time.

As I described in one of my updates from the American Astronomical Society meeting last week, astronomers have announced the discovery of the most compact extrasolar planetary system yet detected. Looking at the KOI 961 system side-by-side with Jupiter and its major satellites strikes me as a particularly illuminating comparison: only 70% larger than Jupiter, the host star (the smallest known to have planets) has at least three planets (the smallest yet found) in orbit around it, the smallest of which is about the size of Mars. John Johnson, an astronomer at Caltech, announced the superlative system last week, and on April 2nd, he will give a talk in the Morrison Planetarium as part of our Benjamin Dean Lecture Series, “The Quest for Habitable Planets Orbiting Red Dwarfs.”

And astronomers have help in their search. Just this week, we had a glimpse into the democratization of astronomy… Viewers of a British television program(me) may have discovered a new exoplanet! Evidence from the Kepler mission suggests the existence of a Neptune-sized planet around the star SPH10066540, orbiting every 90 days at a distance equivalent to Mercury from our Sun. The discovery awaits confirmation, but you don’t have to watch telly in the U.K. to join in the search for such objects. You can go to the PlanetHunters website and start sifting through Kepler data in hopes of finding a planet of your own…

In another of my posts last week, I mentioned the spectacular new Spitzer image of Cygnus X, a massive star-forming region in the constellation (you guessed it) Cygnus. Ten times the size of the Orion Molecular Cloud Complex, Cygnus X appears to host some 26,000 possible young stellar objects, according to an announcement last week.

Moving farther from home, I talked a bit about the new dark matter map that I previously described in a post from Austin. It turns out that analyzing the light from 10 million galaxies call tell you a lot about where dark matter resides, and since dark matter drives the formation of much of the structure in the Universe, that knowledge helps us understand more about the evolution of the cosmos…

The dark matter maps tell one part of the story, but we also rely on studies of the cosmic microwave background to tease out how the Universe has evolved over time. Since 2003, the gold standard of such measurements have come from the Wilkinson Microwave Anisotropy Probe (WMAP). But ESA’s Planck mission recently completed its survey of the cosmic microwave background: the sensor used to make the observations ran out of its coolant a little less than a week ago. It had collected more than two years’ worth of data, however, and the first new high-resolution maps will be released early next year. (Hey! It takes a while to process all that data.)

That’s all for now. Check back for next month’s update! Or come to NightLife on Thursday, 15 February, and check out “Universe Update” live in the Morrison Planetarium.


Ryan Wyatt is the director of the Morrison Planetarium and Science Visualization at the California Academy of Sciences.