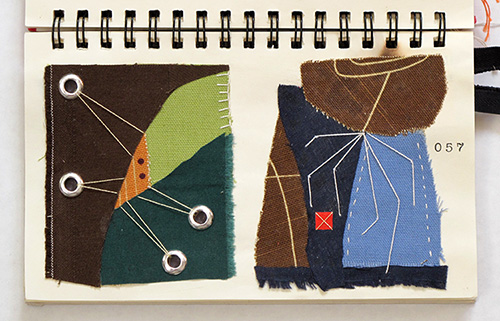 Long View Sketchbook page 057 addresses the issue of marine litter, a worldwide environmental problem that extends from the Arctic to Antarctica. Marine litter is defined by the United Nations Environment Programme as 'persistent, manufactured or processed solid material discarded, disposed of or abandoned in the marine and coastal environment.' Such items drift for long distances, driven by ocean currents and winds. The debris is commonly found on the water surface, on seabeds, and beaches, from populated areas to remote regions. A great deal of this waste is plastic which degrades slowly, if at all. The continued accumulation of these materials in the ocean and their inability to be restored to non-toxic forms exacerbates build-up and ensures long-term environmental pollution. This trend has been observed by a number of scientific studies across the globe, confirming that the marine litter situation worsens each year. In Antarctica, one such survey was made in 1997 by Chilean scientists on Livingston Island. At this site alone, well over 1,600 pieces of litter were found, nearly all of them plastic. Approximately one third of the items were strapping bands, ropes and net pieces from fisheries to the north. Over 700 of the items were made of polystyrene which is notoriously slow to biodegrade, especially in its foam form. My image represents the threats that plastic debris poses to marine ecosystems. The left side of the diptych pictures a creature caught in discarded fishing netting, also known as ghost nets for their relative invisibility under water. Entangling sea life, the nets restrict movement, causing starvation, laceration, and suffocation in organisms that need to return to the surface to breathe. The right half of the collage alludes to the potential transfer of toxic chemicals from marine debris to the food chain. Not recognizing synthetic material, animals often mistake it for food, proving lethal when swallowed in significant quantities. There are varied efforts presently under way to study and reduce the impacts of marine litter. The NOAA Marine Debris Program is an initiative that partners with other agencies to support research and introduce measures to eliminate plastic debris. Their blog is especially informative. Other notable movements include Ocean Conservancy's Trash Free Seas campaign and Project AWARE's Dive Against Debris events.