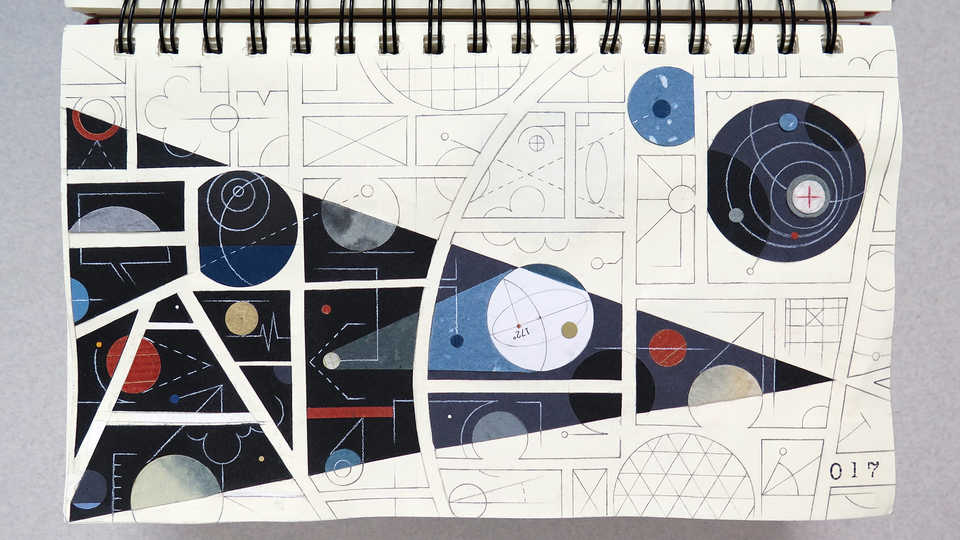 The South Pole may rank among the most inhospitable places on Earth, but for cosmologists, it’s literally heaven on Earth. "The South Pole is the closest you can get to space and still be on the ground," says John Kovac, leader of the Background Imaging of Cosmic Extragalactic Polarization (BICEP) project. "It's one of the driest and clearest locations on Earth, perfect for observing the faint microwaves from the Big Bang."

Thanks to these favorable conditions and instruments such as the South Pole Telescope, scientists are mapping the distant reaches of the visible cosmos. In the process, they’ve learned that what they see makes up only 5% of the mass and energy of our Universe. The invisible remainder consists of dark matter, a mysterious ingredient that is yet to be directly detected — and to a greater extent dark energy, an unknown force that accelerates the expansion of the universe.

This sketchbook page visualizes the visible Universe as a telescopic shape associated with light beams, scans, and radar sweeps. The collage is a companion piece to Long View Study No. 18 which explores the same concept and motif with different visual elements. Both were created with cut paper and graphite.