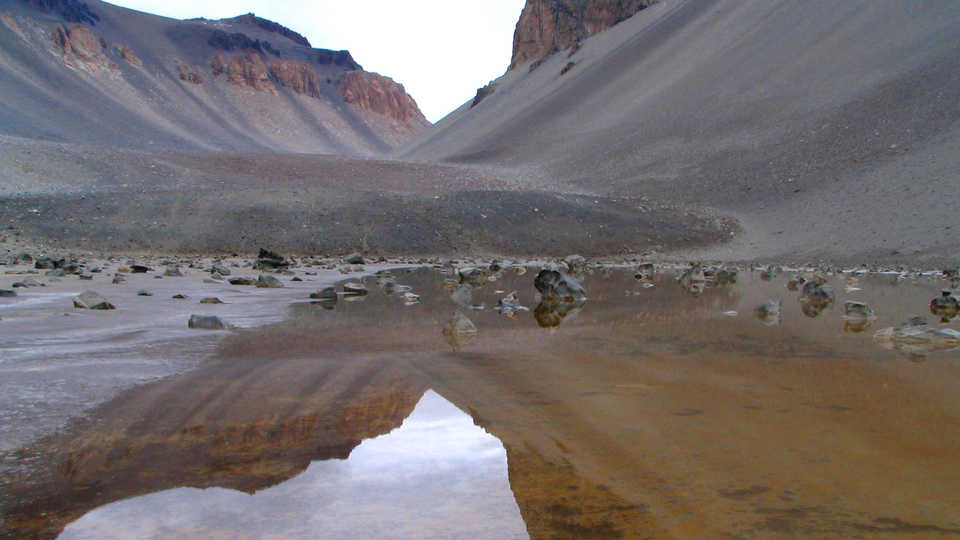 Antarctica’s natural resources are protected by the Protocol on Environmental Protection to the Antarctic Treaty. Shown is the shallow saline Don Juan Pond in the Wright Valley, Victoria Land, where a new mineral, calcium chloride hexahydrate (also known as Antarcticite), was discovered in the early 1960s. Photo: Glen Snyder, NSF.

How safe are the Earth's polar regions from extraction of their natural resources? The Arctic hangs in the balance; an Obama-era ban on oil and gas drilling in the Arctic Ocean and parts of the North Atlantic coast was lifted by the current administration in 2017. That order, in turn, was recently halted by a federal judge who ruled that only Congress—not presidential executive orders—has the authority to reverse bans on oil drilling leases. The ruling is expected to be appealed to the Ninth Circuit Court of Appeals.

Antarctica's protections, on the other hand, are assured until 2048 at least. The continent is covered by the Antarctic Treaty whose Environmental Protocol bans commercial mineral extraction outright. Put into effect in 1959, the original treaty governed “economic, political, social, scientific, and environmental issues on the continent,” but questions around mining weren't considered until 1970. After 20 years of discussion, the member nations reached an agreement named the Protocol on Environmental Protection to the Antarctic Treaty, also known as the Madrid Protocol. Signed in 1991, Article 7 states that “any activity relating to mineral resources, other than scientific research, shall be prohibited.” The protocol took effect in January 1998 for a term of 50 years, and on its review in 2048 any changes will require at least a 75% vote from the signatories.

The ban's strength beyond that date remains unclear. But should it fail, the continent itself would pose formidable challenges to commercial exploitation. Antarctica's weather, ice and distance from industrialized areas threaten to make any mineral or oil extraction hazardous and expensive. Moving ice streams, glaciers, and drifting icebergs weighing millions of tons would need to be dealt with, not to mention the thousands of meters-thick snow and ice under which the resources lie. Such difficult conditions would render mining, drilling, shipping, and related operations economically unviable — at least in today's natural environment.

2048's environment is less certain. Given a warming climate, Antarctica’s untapped resources could become less distant and expensive to extract with the development of new technologies. The international community senses this, as Simon Romero of the New York Times observes: "An array of countries are rushing to assert greater influence here, with an eye not just toward the day those protective treaties expire, but also for the strategic and commercial opportunities that exist right now." Anne-Marie Brady, a scholar at New Zealand’s University of Canterbury who specializes in Antarctic politics, adds: “The newer players are stepping into what they view as a treasure house of resources.”