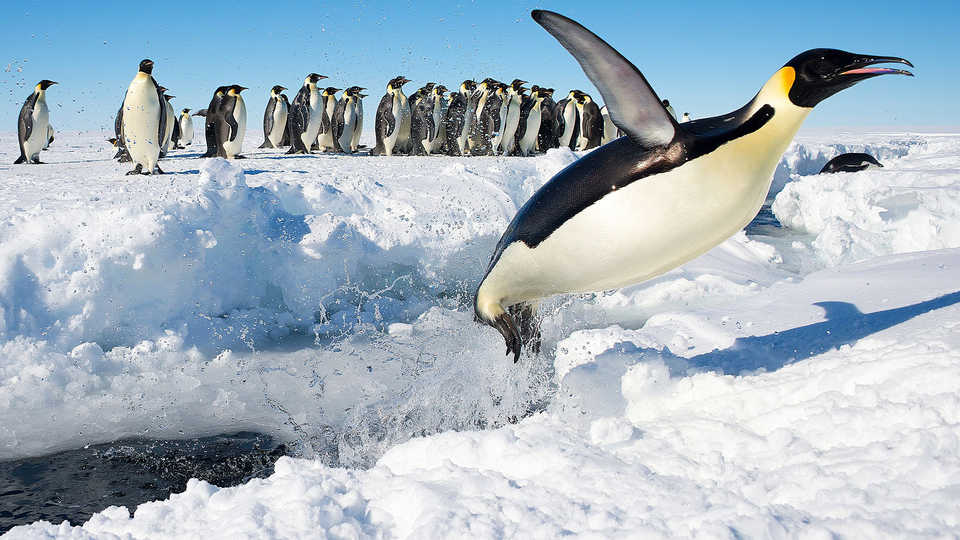 An emperor penguin (Aptenodytes forsteri) jumping out of the water. Photo: Christopher Michel, CC BY 2.0.

There were 600,000 emperor penguins in Antarctica according to 2009 computer model estimations. Ten years on, researchers are looking for more accurate figures as well as data on how individual colonies are faring. So they are using Earth-observing satellites to take a census.

High-resolution images taken from orbit can be used to track which colonies are thriving and which may be threatened. Emperor penguins are thought to be particularly vulnerable to climatic changes since they nest on sea ice which expands and retreats on an annual basis.

"Our idea is to come up with a population estimate for emperor penguins around the continent over the course of 10 years," said Michelle LaRue, an ecologist with the University of Canterbury in New Zealand and principal investigator of the NSF-funded study. "And in addition…looking at habitat suitability and some of the environmental factors that may be causing their population fluctuations."

To that end, LaRue and her team have also been photographing emperor penguin colonies from helicopters and planes. Shooting from close range provides the expedition with detailed images that indicate precise penguin numbers. By combining those figures with orbital survey data, the scientists hope to build a statistical model that automatically counts emperors around the entire continent using only satellite images.

Creating a program that accurately counts penguins over time would be a boon for ecologists. It may also be a necessity. With significant declines in sea ice predicted for the end of the century, many experts foresee listing emperors under the Endangered Species Act. But doing so requires counting every last bird for the most rigorous global census of emperor penguins ever. It's looking achievable.