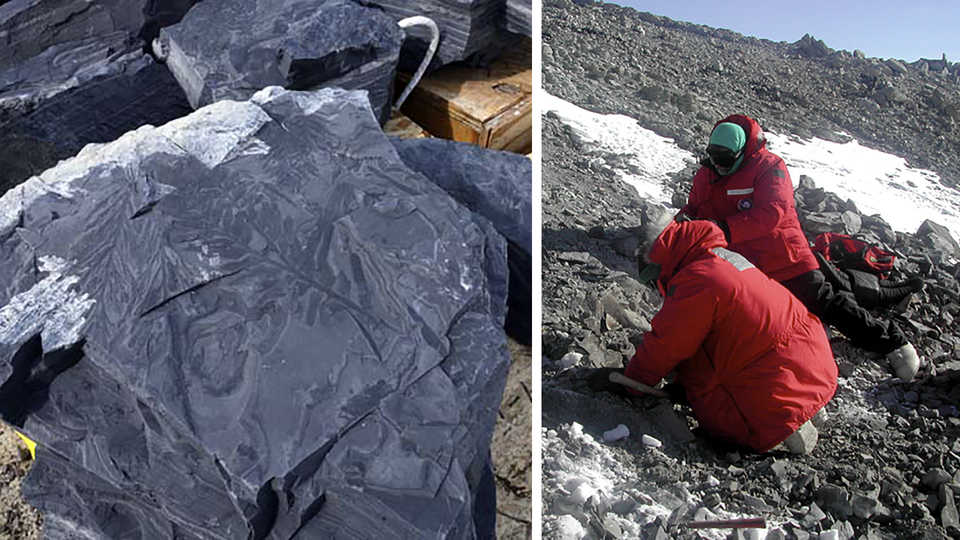 Left: A specimen of Triassic plant fossils recovered from the Allan Hills, a region of the McMurdo Dry Valleys rich in plant fossils dating from more than 150 million years ago. Photo: Peter Rejcek, NSF. Right: Researchers excavate rocks at the head of the Shackleton Glacier. Photo: Charles Daghlin, NSF.

Antarctica is one of the coldest, driest, and all-around harshest environments on the planet. But it wasn't always so. Millions of years ago, when the continent was still part of the expansive Southern Hemisphere landmass called Gondwana, lush forests flourished near the South Pole.

The first clues to Antarctica's green past emerged during British explorer Robert Falcon Scott's fateful 1911-12 South Pole expedition. His team collected about 40 pounds of rocks containing 250 million-year-old fossilized seed ferns, providing evidence that Antarctica had once been joined with the other continents and experienced a much warmer climate.

Among Scott's leaf specimens were Glossopteris, trees that are thought to have dominated the landscape before the Permian-Triassic mass extinction. The species grew from 65 to 131 feet (20 to 40 meters) tall, with seeds and long, broad, tongue-shaped leaves that likely fell off at summer's end.

Today, newly found fossils of Glossopteris reveal how these robust plants thrived before the extinction and even suggest what caused the event. At the forefront of these studies is UW-Milwaukee geologist Erik Gulbranson whose team recently discovered five new fossil forests that likely spanned the Permian extinction interval.

The causes of this extinction, during which up to 95 percent of Earth's species died out, are still under study. However many scientists believe that Siberian volcanic activity released massive amounts of greenhouse gases into the atmosphere over the course of 200,000 years, increasing the planet's temperatures and acidifying the oceans beyond what most life could adapt to.

Gulbranson's research into the link between plants and ecosystems during the Permian extinction seeks to shed understanding on how the extinction played out on land. His team suspects that ancient microbial life played a key role.

"These new findings tell us how these organisms were reacting or responding to the climatic or environmental changes that were taking place during the extinction crisis," Gulbranson says. "Having a fossil record of the extinction interval is our only understanding of how life on the planet goes through such an event."