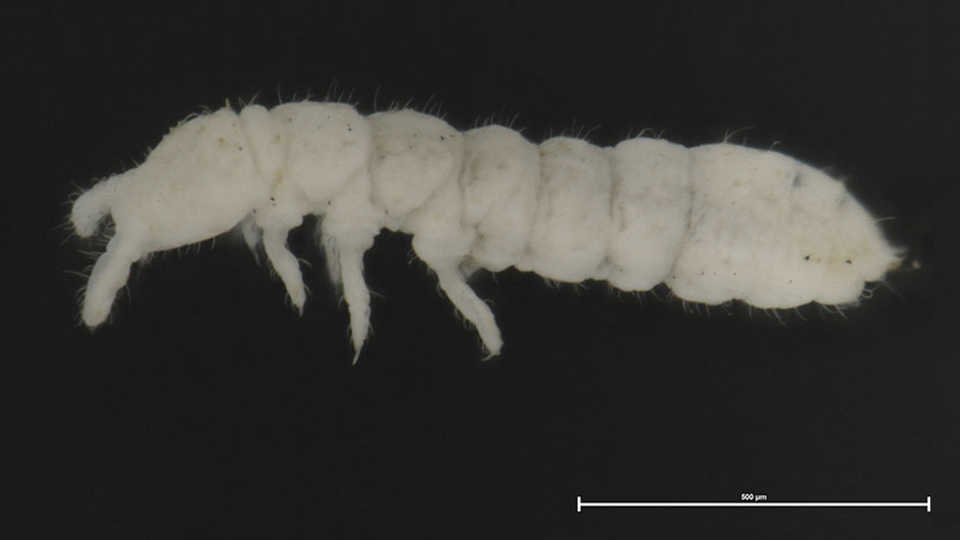 A close-up image of Tullbergia mediantarctica collected in the Transantarctic Mountains. This Collembola's size is about 1.2 mm in length, around the size of a pinhead. Photo Credit: Gemma Collins, University of Waikato

Upon exploring Antarctica's McMurdo Dry Valleys in 1903, the renowned explorer Robert F. Scott wrote that “...we have seen no living thing, not even a moss or a lichen ... It is certainly a valley of the dead." Scott can be forgiven for thinking so, as Antarctica's largest year-round land animals are the barely visible Collembola. (Penguins and seals spend much of their time offshore.) Also known as springtails, these six-legged arthropods measure in at around 1.5 mm and thrive not only in the Dry Valleys but throughout the continent amid rocks, soils, and ice.

Collembola resemble insects but are considered a separate primitive group. They are found all over Earth, but the Antarctic species are specially equipped to slow their metabolism and save energy to survive harsh conditions. Similarly to polar-dwelling fish, they employ glycerol in their blood as antifreeze, allowing them to stay alive in frigid temperatures.

Scientific evidence suggests that Antarctic Collembola, along with other microorganisms, evolved on the continent l80 million years ago in a far milder climate. Subsequently, they managed to survive the Pleistocene epoch which bound Antarctica in ice thicker than today as recently as 18,000 years ago. How these creatures pulled off such a long-term survival feat — hardy as they are — remains a mystery.

Researchers have however been able to identify unique genetic differences between the Antarctic Collembola species that were geographically isolated from each other for so long. As a result, future changes in their distributions (dispersion that may come about as glaciers melt and habitable land becomes exposed) can readily be tracked through DNA barcoding. That's significant, given Collembola's high sensitivity to environmental fluctuations and ability to serve as barometers of climate change.