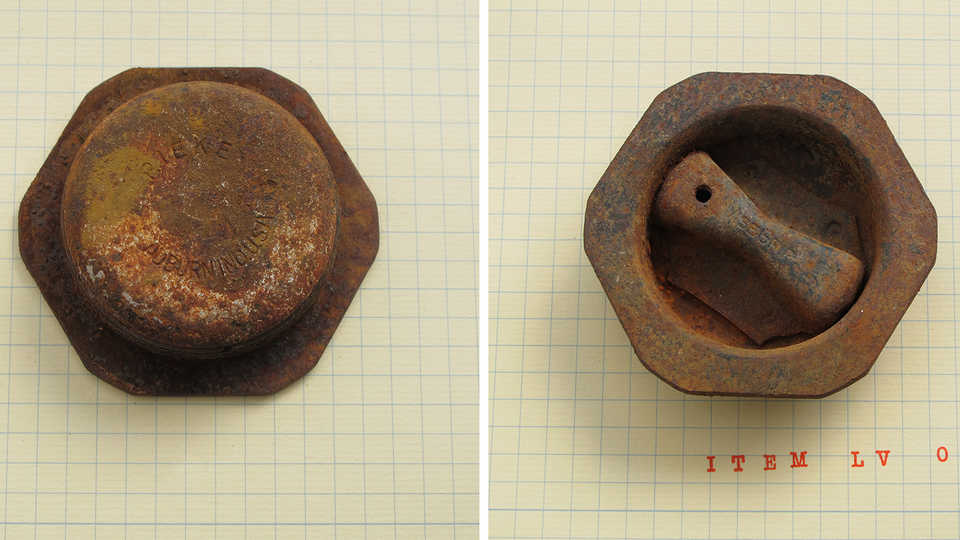 Antarctic Item 21 is a fuel tank cap found and donated to the Long View project by Marble Point camp manager Randall “Crunch” Noring. Marble Point is a rocky promontory of marble along the Victoria Land coast, about 50 miles northwest of McMurdo Station. It was explored by Ernest Shackleton during the first expedition that he led to Antarctica between 1907 and 1909.

Today the United States operates a helicopter refueling station there that facilitates scientific research in the nearby Dry Valleys and northward along the coast. The outpost consists of a main hut, some small structures, and several conspicuously large fuel tanks.

The fuel cap may date back as far as 1955 when the Marble Point facility was established in preparation for the International Geophysical Year, an international scientific campaign centered on the polar regions. A hard-surface air strip was constructed at Marble Point in 1957, accommodating Antarctica’s first wheels-on-dirt landing — counting Sir Edmund Hillary among its passengers.

Although the airstrip no longer exists, the facility has seen increased activity through the years. These days, weather permitting, helicopters are able to fly in and out of the station 24 hours a day during the summer research season.

Given Marble Point’s active history, aging relics periodically surface in the icy soil. The fuel cap is among scores of wayward objects that Noring has found during his 14 Antarctic summers there. Displayed neatly on shelves at the entrance of the main hut, these items show the ravages of time, ice, and weather, and offer fascinating glimpses of polar history. I’m deeply grateful to Crunch for generously contributing part of that collection to the long View Project.