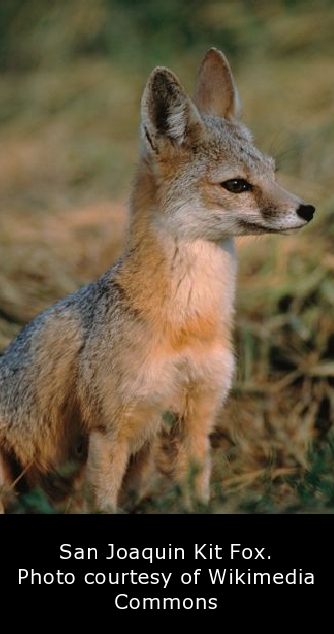 While this time of year is full of stories of ghosts, spirits and trickery, sometimes we don’t have to look far to see a frightening story happening right in our midst!  The story of the San Joaquin Kit fox is one of a disappearing species in danger of extinction.

Kit foxes (Vulpes macrotis) are small mammals in the Canidae family.  Most of us know what a grey fox or red fox looks like and sometimes have seen them in Golden Gate Park quietly running through the trees.  Kit foxes aren’t seen around the Bay Area unfortunately, as Kit foxes prefer a little bit less drizzle and a little more desert.  Their habitat ranges in the southwest USA and down into central Mexico.  These charismatic species are about the size of a house cat with huge ears for hunting in the evening.

One of the larger species of Kit Fox, the San Joaquin Kit Fox can only be found in California’s Central Valley.  Once lush grassland, in the early 1900s agriculture came to the Central Valley and farmers readily converted fertile soil into bountiful cropland.  Warm temperatures and readily available water from the San Joaquin River seemed perfect for settling down.  With most of the land being used for farming or raising animals for consumption, the San Joaquin Kit fox was pushed out of their native habitat into the fringes of the San Joaquin Valley, clinging to survival with less than 10,000 individuals.

In March of 1967, the San Joaquin Kit fox was listed as an Endangered Species under the Endangered Species Act and has stayed there ever since.  Current riparian habitat restoration along the San Joaquin River has seen some success with sightings in 2006 and 2008 of the Least Bell’s Vireo (Vireo bellii pusillus) bird, another native species that has been extirpated since the 1950s.  Successful restoration projects are helping many birds and mammals make their way back to their native habitats and hopefully keep them from falling into history as a species that once was. 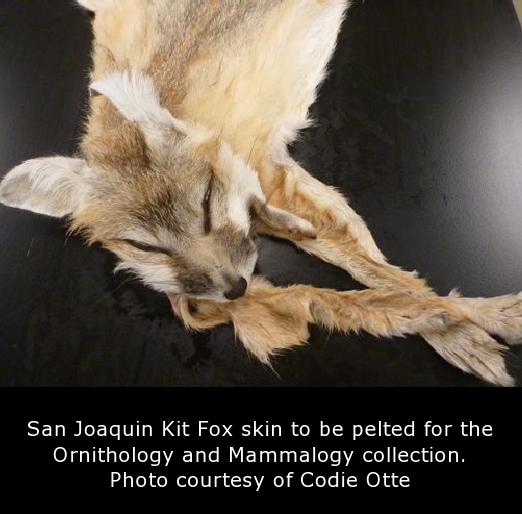 Hearing stories about species like the San Joaquin Kit Fox and thinking about current day extinctions are scary enough for me to last long past the end of October!  This male San Joaquin kit fox was hit by a car in Kern County all the way back in 1997 and will finally make its way into the Academy’s pelt collection, skeleton collection and tissue bank.  Researchers will be able to look at our few specimens of Kit Foxes and study their genetics and population distribution to see how to potentially help these small foxes.  Striking the balance between farmland that provides food for humans but that also can provide habitat for many different species is a complicated process.  With a lot of work and dedication by many individuals the San Joaquin Kit Fox can become a success story instead of a tale of ghosts…