Most people who see me in the Project Lab know me as the bug and spider guy, taking pictures of and talking about the arthropods with whom we share the planet. But I have a secret past in which I studied the butterflies of the sea, those fascinating sea slugs known as nudibranchs! 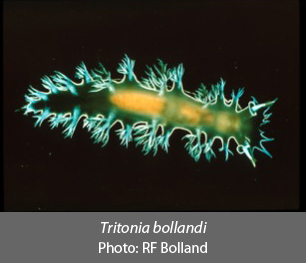 For those of you who follow the project lab blogs, you are aware that 2 different graduate students working in the Project Lab are doing projects on nudibranchs for their degrees. Each of them is studying a different group of these fascinating and beautiful animals, defining their evolutionary relationships, and probably finding new species along the way.

I became involved with nudibranchs in the mid-90’s here at the Academy’s Summer Systematics Institute (SSI), where I worked with Terry Gosliner. I was hooked, and soon returned as a graduate student at San Francisco State University, with Terry and Gary Williams (our coral expert) as my in-house research advisors. I spent much of my time studying the family Tritoniidae, who feed on soft corals, so Gary was able to provide valuable expertise on their prey species. At the time, the majority of our museum holdings of this family had been collected and preserved in a way that made DNA analysis impossible, so without much fresh material, I was confined to a morphological approach. 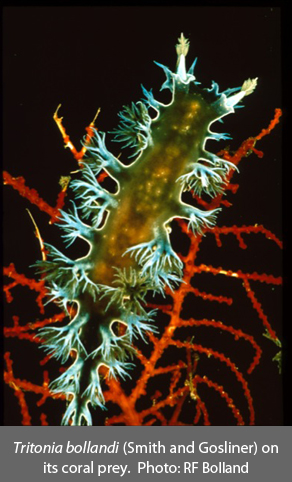 Perhaps the coolest part of the work was the job of identifying and describing new species. Dr. Robert Bolland, now retired, is a nudibranch expert, collector and diver who spent much of his time underwater collecting in the Ryukyu Island chain of Japan, providing many specimens to our collection. He collected a beautiful little nudibranch, along with the soft coral he found it on, which the nudibranch appeared to be eating.

The new species was named in honor of the collector. Dissections of the preserved animals provided stomach contents containing tiny skeletal elements from the coral, which we compared to the coral found with the animals, providing evidence that this coral species appeared to be the sole food source for this nudibranch.