As a part of my masters research, I am studying the nudibranch Doto coronata, which is found in the Northeast Atlantic from Iceland to Scandinavia, and to Iberia and the Mediterranean. Doto coronata is the type species for the genus Doto, meaning that it is the representative species for the genus. I am particularly interested in examining D. coronata because it is also a “species complex,” a group of closely related species that are difficult to delineate due to recent reproductive isolation. Since D. coronata is a type species, it is important to know which specimen/species within the complex actually represents the genus as a whole.

The Doto within this species complex are a challenge to tell apart since their morphologies are so similar. It is thought that there are many species within D. coronata since several specimens have been found feeding on distinctive hydroids. It is still uncertain whether hydroid prey can be utilized as a taxonomic character for the Doto. If the hydroid prey is found to be a reliable character for the species complex of D. coronata, it may be possible to use it to identify other cryptic Doto species.

So, how many species are thought to be within the species complex of D. coronata?  In 1976, Lemche identified four cryptic species within D. coronata. He acknowledged that the four he described had the potential to be divided into even more species. (Morrow et al, 1992). Later on, two distinct morphs within this complex were described by Morrow et al.  One of these morphs was collected from the hydroid Hydrallmania falcata and the other from Sarsia eximia (Morrow et al, 1992).

Since a great deal of confusion still exists with regards to which specimen represents D. coronata, a neotype has never been assigned. A neotype is a type specimen that has been designated following the original holotype.  It is created in the event that the holotype is either lost or when the original description does not cite the specimen. 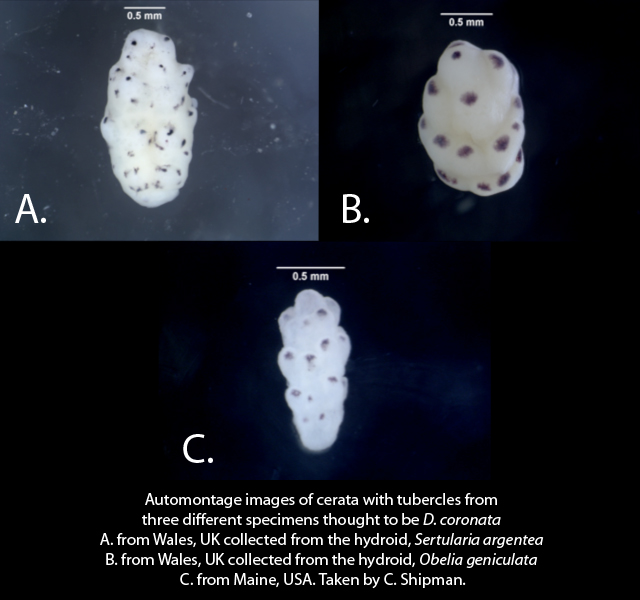 Several specimens suspected to be D. coronata have been examined in the Project Lab to provide greater clarity on this species complex. These include specimens collected from three distinct hydroids from Wales, UK, one from Maine and another from South Africa. Comparisons of the Automontage photographs of these specimens and their DNA will help sort out if there are additional species within this complex. The photographs of these specimens indicate there is distinguishable variation in the shape of the cerata and tubercles. These photographs and their gene sequences will assist in determining if these small morphological differences observed are due to intraspecific or interspecific variation.