There’s Bugs in My Paint, and I’m eating WHAT?!! 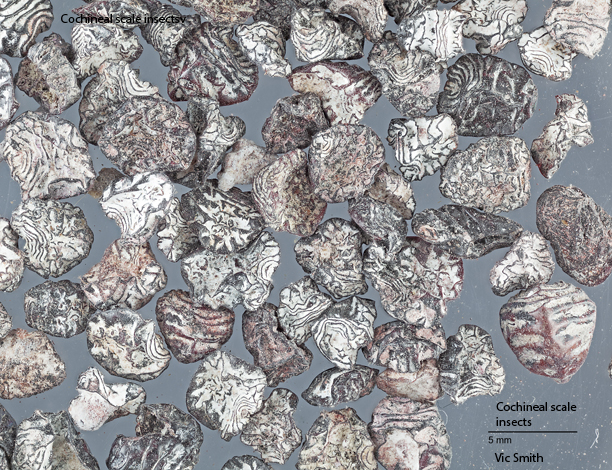 Before I became a biologist, I spent about 15 years as a licensed painting contractor. During the warmer months, a constant annoyance was the fact that insects were attracted to the bright colors and strong reflections of fresh paint, and my pristine white living room wall would be full of moths and gnats imbedded in the fresh paint, requiring me to carefully pick them out and touch up the paint, something that really ‘bugged’ me.  I no longer make my living this way, but last month I was helping a friend restore and paint a house that had smoke, water and mildew damage, and I remembered from my contracting days that the best way to solve these problems was to use a shellac-based primer. Then it dawned on me…shellac is a product made from insects! Shellac is produced from the secretions of the female lac bug, (actually a group of similar species of plant juice sucking true bugs). Depending on the host plant, it may be a pale yellow through a dark crimson color, and has been used historically as a dye and medicine. 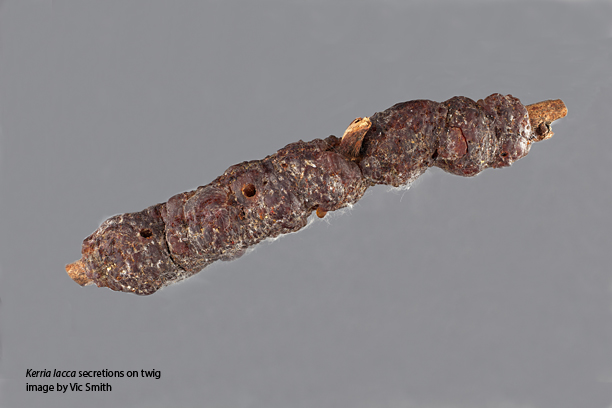 India is the prime producer of lac, and the insect that produces most commercial lac is known as Kerria lacca, though there are several other species and countries that produce lac.  When it is refined, lac can be dissolved in ethyl alcohol to form shellac, which is used as a wood finish and sealer ingredient, as is also used in some nail polishes. 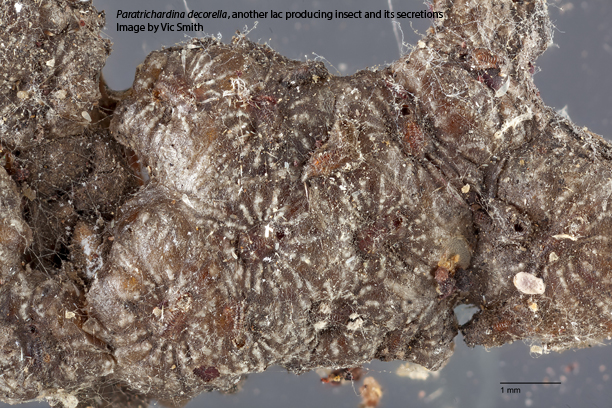 But wait, there’s more!  As Halloween and Thanksgiving approach, many of us will be looking forward to some of our favorite treats, such as ‘candy corn’ and other candy treats.  An examination of the ingredients in my candy corn showed confectioners glaze listed right after sugar and corn starch. Confectioners glaze is food grade shellac. I’m eating bug secretions!  Many other candies and other food products make use of shellac as an ingredient, coating, or polish (some citrus and apples). Many pharmaceuticals also use shellac as a pill coating.  These revelations got me to thinking about other insects that find their way into our food supply (other than the FDA allowable percentage of insect parts in peanut butter and grains).  I remembered that last year, Starbucks came under fire for using carmine coloring in one of its Frappuccinos®, because carmine is the product of the cochineal bug, a scale insect related to the lac bugs (Carmine, cochineal dye and natural red #4).  This scale insect inhabits Opuntia cactus in Mexico and South America, and produces carminic acid as a deterrent to predators. Though the thought of eating bug secretions might gross you out, these are natural products and are no doubt safer than the coal tar derived red food colorings used in its place. Carmine is also used as a red coloring in cosmetics like lipstick and make-up, and has also been used as a fabric dye.

As an entomologist, I have become aware that one way or another, we are never far from the presence of insects. These are just a few more examples of how insects are pervasive in human affairs.