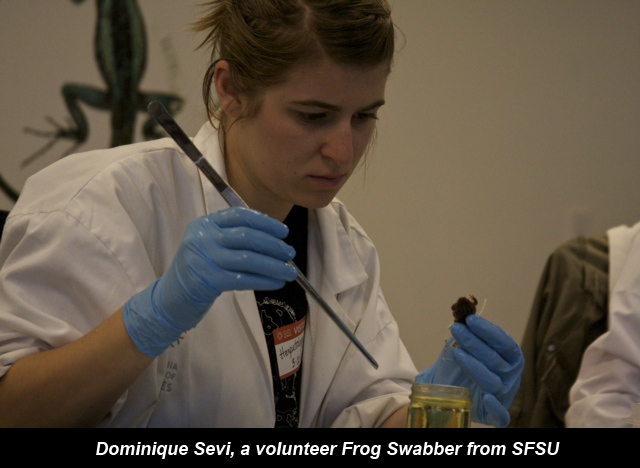 Currently, the Herpetology department is acting as a detective, seeking the origin of the Chytrid fungus, a pathogen responsible for huge declines in amphibian populations around the world. Under an internal grant from the Hagey Research Venture, the collaborative team of Dr. Dave Blackburn (CAS) and Dr. Vance Vredenburg (SFSU) is utilizing the Project Lab to investigate the origin of Chytrid fungus, Batrachochytrium dendrobatidis (Bd), its geographical spread, and the diversity of strains. “We are using the museum collections to walk back in time,” says Dr. Blackburn.  “We are repurposing the use of the collections to more directly affect conservation.”

Dr. Blackburn explained the frustration that this pathogen presents to conservation efforts. There are three main ways in which we lose species: climate change, habitat destruction, and disease. If we protect the land, and work towards decreasing human impact, we still have to face the fact that frogs are dying from Chytrid fungus. But how has Chytrid fungus become so widespread?

As of now, they are exploring the hypothesis that Chytrid originated in Africa and was unleashed around the world via the African Clawed Frog, which was being exported beginning in the 1920’s for medical research. The CAS team has ascertained the shipping dates from a primary breeding facility in South Africa and is checking native species of frogs for Chytrid before and after the recorded importation of African Clawed Frog. Further support for the possibility that the lineage is of African origin is the lack of major population declines or mortality of frogs despite widespread evidence of the pathogen, perhaps signifying an immunity or evolutionarily acquired tolerance.

In the Project Lab, Sonia Ghose, a CAS researcher, and the Frog Swabbers, her team of student volunteers from San Francisco State University, are testing this hypothesis. Through a meticulous process of swabbing frog specimens, from some of the 300,000 amphibian specimen in the CAS’s collections, they are gathering DNA for Dr. Vredenburg’s creative PCR technique to ascertain the presence of Bd on even the oldest formaldehyde fixed and ethanol soaked specimens. Unlike the typical histology technique that is hugely time consuming, damaging to specimens, and less likely to thoroughly note the presence or absence of Chytrid, the swabbing is comparably efficient and effective. They swab each specimen 30 times, ten on each side of the underside and five times on each hindfoot, to check the most likely places where the Chytrid may have bred. Chytrid is an aquatic fungus and needs damp places to grow. It propagates in the outermost layer of a frog’s skin, inhabiting keratinized cells and often killing the frog by interrupting necessary exchanges of water, electrolytes, and air. 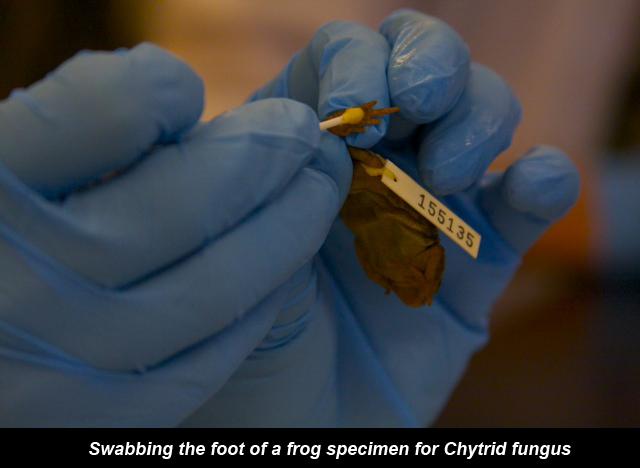 Sonia extracts DNA for a quantitative PCR test, which is basically a presence-absence test that also records the intensity of the Chytrid infection if it is present. They will soon move on to sequencing the DNA in search of a hyper virulent strain of Bd, perhaps evidence of a looming conservation crisis. Dr. Blackburn explained the possibility of a “super bug,” a Y2K-esque pathogen that could have been born from the recombination of different lineages of Chytrid.

Sonia and the Frog Swabbers will be in the Project Lab some Mondays and Fridays if you are interested in watching the research in progress. Attacking the research from a variety of angles, the CAS team is hoping to piece together the history of the Chytrid fungus in an effort to change its future effects on amphibian species. Uncovering the history, geographical path and virulence of existing strains will help direct conservation efforts and stop the shipping of potential host species.