The fascinating toes of geckos 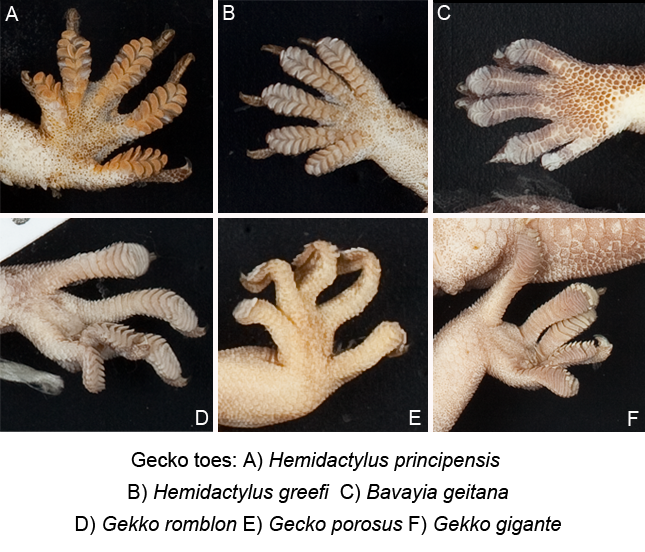 Geckos are well known for their gravity-defying ability to climb up vertical and inverted surfaces, whether they’re trees, rocks, walls, ceilings or glass windows. Of the approximate 1,450 species of geckos, around 60% of them have adhesive toepads that allow them to exploit vertical habitats that aren’t easily accessible to other animals. This amazing adaptation has inspired scientists to engineer bio-mimicry technologies such as robots that can scale walls and new adhesive materials. So how do geckos do it? Several mechanisms have been proposed and disproven; these include suction, glue, interlocking, electrostatic attraction and friction. But instead, it’s been discovered that geckos hold on using weak attractive intermolecular forces (aka Van der Waals forces) with the help from specialized structures on their toepads.

In the Project Lab, I have been able to get a look at the toes of the different gecko species that I've been photographing from the Herpetology collection. In the photographs above, you can see that their toes are covered in rows of leaf-like structures called lamellae. An even closer look using a scanning electron microscope would reveal that these lamellae are carpeted with hair-like setae, the ends of which are split into hundreds of nano-sized hairs called spatulae. Altogether, a gecko can have a billion spatulae, making intimate contact with the substrate surface. The combined attractive force of all of the weak molecular interactions between the spatulae and the surface is equivalent to about 600 pounds per square inch! But if gecko toes are so ‘sticky,’ you may wonder how they even lift their feet up.  Geckos actually bend their toes in the opposite direction to human fingers and toes, and this allows them to peel their toes up from surfaces. This peeling action changes the angle of the setae, thereby reducing the Van der Waals force and releasing the foot.

Traditionally, it was thought that adhesive toepads evolved only once within geckos, but surprisingly, a recent study suggests that they evolved independently ELEVEN times (Gamble et al 2012)! It is truly incredible to think that natural selection repeatedly drove the evolution of such an extraordinary adaptation. There’s definitely still a lot more that scientists and engineers can learn from the natural world.