Specimen of the week: Rattus norvegicus

The last few weeks up in the Project Lab, I have been preparing some study skins and skeletons of Rattus norvegicus.  But before you wonder where these specimens were found and call the exterminator, I should specify that these are domestic rats, which are slightly different from the rat one may imagine hiding out in the alley.

So what is a Rattus norvegicus?  Its most common names include Brown Rat, Norway Rat and Hanover Rat.  This species is thought to have originated from Asia, and is now found on almost every continent except Antarctica.  This prolific species has also given rise to the “laboratory rat” and also our furry, friendly domesticated house pets, the “fancy rat.”  Although these fancy rats are still considered the same species, Rattus norvegicus, they can look quite distinct from the same species found in the wild. 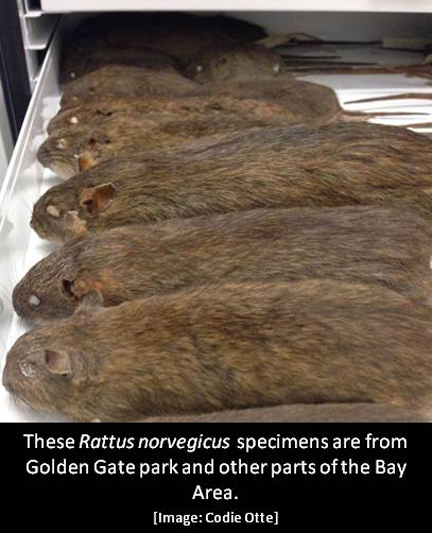 The main and most conspicuous difference between fancy rats and wild rats is color.  Fancy rats can exhibit a wide variety of colors from white to black, and many shades of brown.  This color variation is extremely rare in wild populations and would most likely be a detrimental feature if exhibited frequently - a white rat is much easier to spot by potential predators!  There are also some temperament differences in domesticated rats that make them more sociable towards their pet guardians. 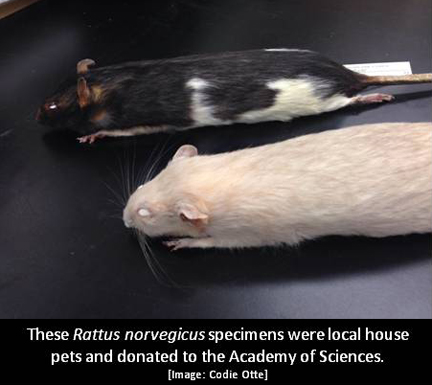 But why would we have these domesticated breeds in our collections?  If you’ve ever walked through the museum, you may have noticed a small display of domestic dog breed skulls hanging on the wall near Tusher African hall.  Although we may think of dogs as separate breeds, they are all considered to belong to one species, Canis familiaris.  This may bring up the question then, what is a species?  There are many definitions. One definition, perhaps the best known, suggests that a species is a group of organisms that can interbreed and create fertile offspring.  So most dog breeds have arisen with artificial selection, and once established can reproduce on their own, which is also the case in the domesticated fancy rats.  While it may not seem as important to keep specimens of these domesticated animals, they can still give researchers insight into how species have changed over time. Whether it is a morphological difference like pelage (fur) color, size, or shape, or whether it is a genetic variation, these specimens can help researchers piece together the puzzle of a species’ history.