Specimen of the day: the Iranian Fat-tailed Gecko 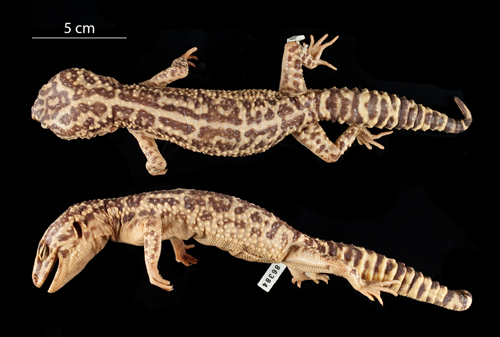 In my work photographing the Herpetology holotype collection, I have the opportunity to handle many interesting specimens, and as I move from one specimen jar to the next, I never know what to expect. Last weekend, I pulled out a jar that was quite a bit bigger than the usual ones that I work on. As I opened the lid and lifted out the specimen, I couldn’t help smiling in delight – it was a large, meaty leopard gecko covered with tubercles and dark reticulations on its dorsal side. The specimen was CAS 86384, Eublepharis angramainyu. I placed it under my camera and took a closer look.

The Iranian Fat-tailed Gecko (Eublepharis angramainyu), also known as the Western Leopard Gecko, is a ground-dwelling gecko that can be found in Iraq, Iran, Syria and Turkey, and it belongs to the subfamily Eublepharinae. All members of this subfamily have movable eyelids (latin: eu=true, blephar=eyelid), and this trait distinguishes them from all other geckos, which instead have a protective membrane over their eyes that they lick clean. In addition, members of Eublepharinae are nocturnal and do not have the adhesive feet that we often associate with geckos.

E. angramainyu was described in 1966 by Academy herpetologists Dr. Steven Anderson and Dr. Alan Leviton, and I was handling the exact same specimen that they had used for the species description. I pulled up their 1966 publication to learn more about this gecko's past. It was “collected along the old road between Masjid-i-Suleiman and Batwand, Khuzistan Province, Iran, by Steven C. Anderson on May 20, 1958.” The species was named after “Angra mainyu,” which is the “Spirit of darkness” in the ancient Iranian religion of Zoroastrianism, and it refers to the nocturnal activity of this animal. I then saw the black-and-white photograph of this same specimen that was taken 46 years ago. It made me wonder what it must have been like to travel to Iran decades earlier and to find such a marvelous animal in the foothills of the Zagros Mountains. If only these specimens could talk. 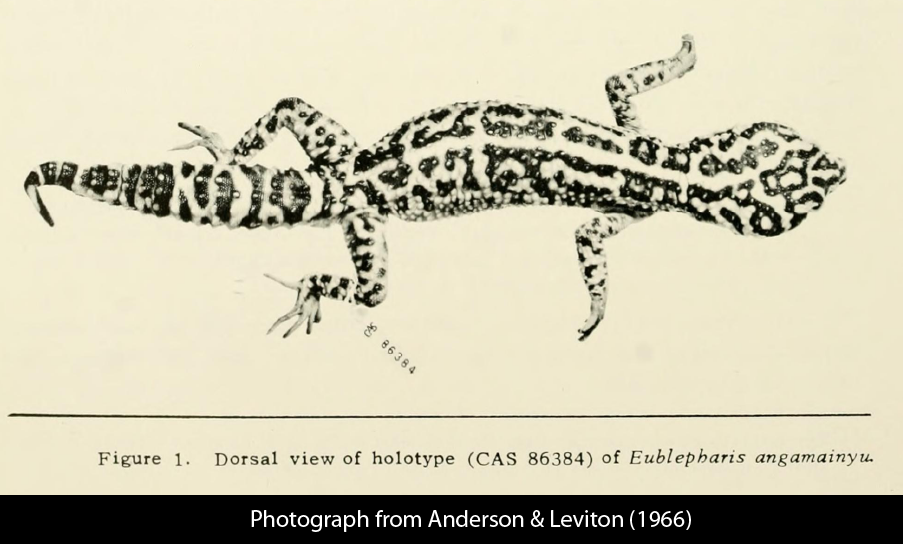 There is so much history contained in the Academy’s research collections, which have specimens that date back all the way to the late 1800s. By documenting our specimens using tools such as digital imaging, many years from now, scientists can continue to learn from these specimens and the stories behind them.