Specimen of the Day: Common Poorwill

Specimen of the Day: Phalaenoptilus nuttallii 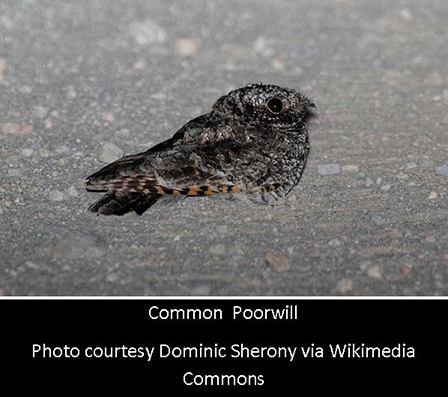 Phalaenoptilus nuttallii is quite a big name for such a small bird! The common name for this bird is the Common Poorwill, although you may have never even seen or heard of this bird before because of its amazing camouflage and nocturnal lifestyle.

The Common Poorwill belongs to a group of birds known as the Nightjars. They are nocturnal birds that can be found on the ground or in low tree branches watching for insects. The calls of the Poorwill are what actually give these birds their name. “Poor-will, poor-will, poor-will” they call at night, often being mistaken for insects or some other animal. The plumage of the Common Poorwill renders them virtually invisible, especially at night, which is why most people may not even know the sound they are hearing is actually a bird! 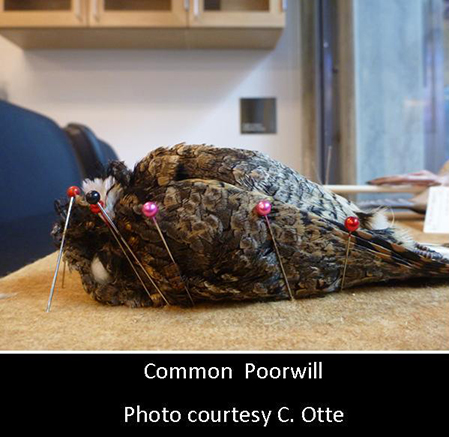 A special thing about the Common Poorwill is that this bird can enter into a state called “torpor” during the winter. Like mammals, these birds can lower their body temperature to a state resembling hibernation until food becomes more abundant. Unlike hibernation, which can last many, many months, torpor can refer to shorter periods of decreased metabolic activity and heart rate. For example, hummingbirds may bring their body into a state of torpor during the evening when temperatures are lower until the following morning when the temperature rises.

While the Common Poorwill may be new to you, they certainly are an interesting and beautiful bird. If you hear one on a summer night look down on the ground, it may be hiding at your feet!