I recently started working in the Project Lab here at the California Academy of Sciences and one of my favorite aspects of working in here is sharing my research with museum visitors. Many visitors do not realize that the Academy is a place of active scientific research. We have researchers studying everything from viruses to plants to spiders and everything in between, including some enigmatic creatures that you may have never even heard of before… sea slugs. 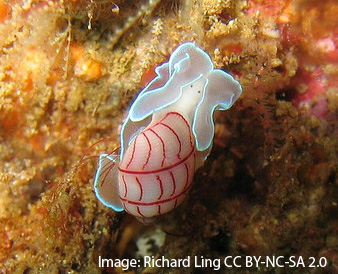 I can’t quite pinpoint how or when I first learned about sea slugs— it may have been an IMAX movie, or it may have resulted from having a dive buddy who was an underwater photographer and sea slug junkie. Whatever it was, little did I know that my fate was tied to these amazing animals.

Today I find myself in a master’s program working on sea slugs, and my research project fills most of my days and many of my nights and dreams as well. I realize that not everyone knows what sea slugs are, so I’d like to do a little bit of explaining.

If you remember back to biology class, you may remember a group of animals known as mollusks (phylum Mollusca). Mollusks are soft-bodied, and include animals such as squid, snails, and clams. Sea slugs are a group of mollusks that live primarily in marine habitats and are slug-like, hence the name. They are slug-like because through the course of evolution, many groups of these animals have reduced or lost their shells in the adult stage.

Within the sea slugs (for the record, we call these opisthobranchs in the scientific community), there is a group that is particularly interesting to me— the nudibranchs. Nudibranch literally means “naked gill.” Nudibranchs have no trace of a shell in the adult stage, so their gills are “naked” or exposed on their backs, unprotected by a shell. The nudibranchs have evolved all sorts of interesting ways of protecting themselves from predators. Many species have hijacked defense mechanisms from their prey. For example, many aeolid nudibranchs feed on cnidarians, animals that have stinging cells such as corals and jellies, and are able to use these stinging cells for their own protection. 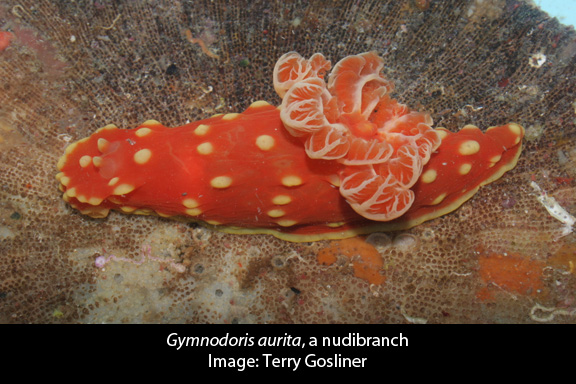 Sea slugs can be found from the shallow intertidal to the deep sea, and from the polar regions to the tropics. I encourage you to look for sea slugs and particularly nudibranchs the next time you find yourself tidepooling. Though, I will warn you that there are some sea slug imposters out there. Some folks occasionally refer to sea cucumbers as sea slugs (a real challenge with common names compared to scientific names, but that is a whole blog post of its own).  Sea cucumbers are not mollusks. They belong to a different phylum, or group of animals, known as the Echinodermata, or echinoderms. This group includes seastars, sea urchins and other animals that have five-part radial symmetry as adults. To confuse things even further, there are species of sea cucumbers that in their juvenile stage look exactly like nudibranchs! 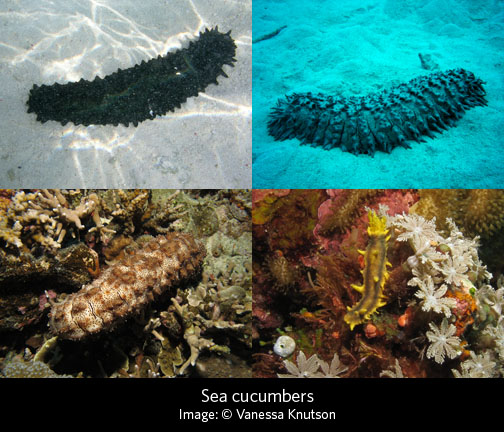 In general, most sea cucumbers that you may encounter tend to be a lot larger than nudibranchs and other sea slugs.  Most sea slugs that I have run across are about 3 inches in length or less, whereas most sea cucumbers I have encountered are much larger than this.  If you happen to see tube feet (elongated sucker-like structures like what you would find on the bottom of a seastar), you know that you've got a sea cucumber instead of a sea slug (though not all sea cucumbers have tube feet).  Another indicator would be to look for rhinophores.  Rhinophores are the two sensory structures on the head end of a sea slug. Not all sea slugs have these, but if you see them, you probably have a sea slug. 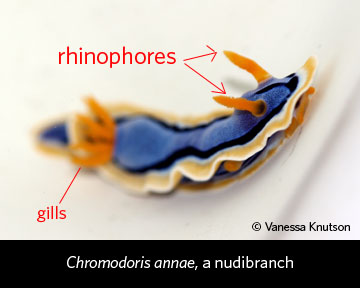 I will leave you by saying that sea cucumbers are not the only sea slug imposters out there, but I'll save the others for another time.