Of Sea Monkeys and Fairies

Many folks that I have spoken to in the last week remember the enticing advertisements that used to commonly appear in comic books and kid’s publications, promising amazing experiences with the new pet craze, the Sea Monkey aquarium.  Containing a small plastic aquarium, a packet of dried eggs, some food and minerals, and a magnifying glass, “just add water” and soon you would have a flotilla of tiny, shrimp-like creatures rapidly swimming around on their backs, darting hither and yon around your new instant aquarium.  It sounded great to me as a 10 year old, but I never knew anyone who actually had them. 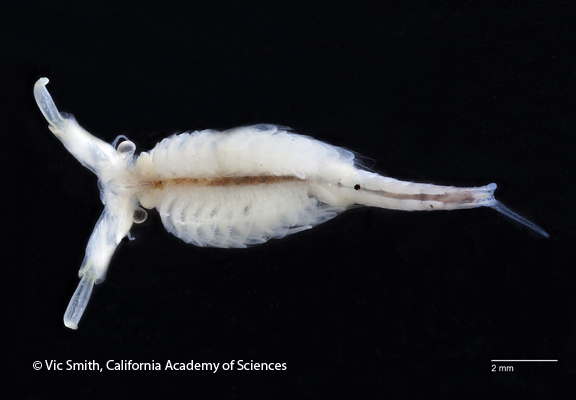 These are not shrimp at all, but belong to the crustacean class Branchiopoda, in the order Anostraca.  Usually between 6 to 25 mm long, they have paired eyes and from 14 to 16 pairs of legs used both for locomotion and to stir up water currents around their gills to aid breathing. 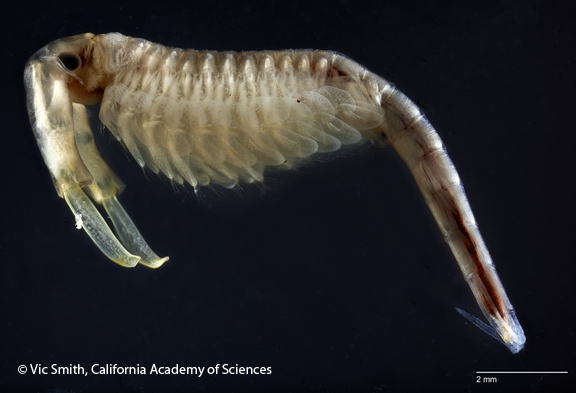 Here in California, fairy shrimp are found in vernal pools, also known as ephemeral ponds. These habitats form for only a few months from about December to May, as low lying areas of wetlands fill with water, which then evaporates leaving the pools dry by summer’s end.  Throughout the U.S., wetlands are an endangered habitat closely regulated by the federal government.  Here in California, many vernal pools are found in the Central Valley, often in agricultural areas and places ripe for development.  The delineation of wetlands on private property often causes controversy and clashes between owners, conservationists and the government. 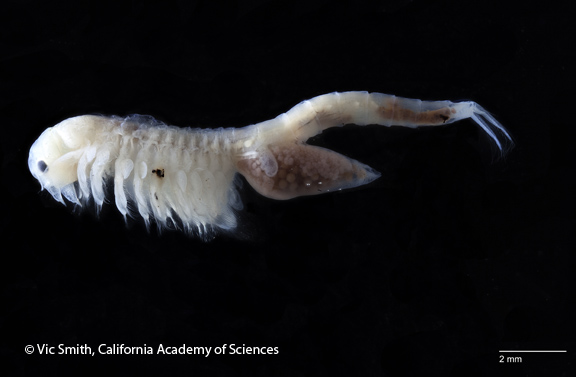 There are several species found throughout California, but this blog focuses on the California Vernal Pool Fairy Shrimp, Branchinecta lynchi, which is federally listed as a threatened species.  These suspension and filter feeders eat unicellular algae, bacteria, and ciliate protists, and also scrape diatoms, algae and protists off of rocks and twigs.  They are an important food source for migrating birds and other organisms using and visiting the pools.  They exhibit sexual dimorphism (physical differences between the male and female), the smaller female recognizable by the attached egg sac, while the male is bigger and more robust, with a pair of large claspers, which are greatly enlarged second antennae, used in mating.  Females of this species lay two different types of eggs.  Summer eggs are soft, and will hatch within the season. Winter eggs have a tough skin, which allows them to form a cyst as they dry. These encysted eggs can survive in soils and sediments for an amazingly long time, up to 10 years!  Winter eggs can be blown long distances, or carried by birds.  This transport from pool to pool increases genetic diversity, aiding species survival.  Pools with lower genetic diversity are more susceptible.  The prevalence of pesticide usage, filling and paving over of wetland areas, and other human activities are the major threats to populations in California, and elsewhere.

The photographs were taken by me with the Big Kahuna digital imaging system, and are voucher specimens from a government survey in the collection of our Invertebrate Zoology department.