Nudibranchs, slugs of the sea 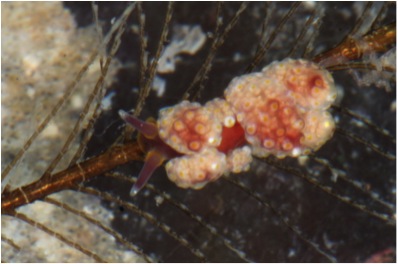 Nudibranchs are vividly colored marine slugs found throughout the world’s oceans. For my Masters research through the Academy’s department of Invertebrate Zoology & Geology and San Francisco State University, I am studying the molecular systematics of the highly ambiguous nudibranch family Dotidae, under the direction of Dr. Gosliner. Systematic biology aims to name and describe new species, as well as delineate the evolutionary relationships between groups of organisms. For the past eight months, it has been great working in the Project Lab, while also educating museum visitors about my research and the research that is done by the over 100 scientists that work here.

The Doto are a genus of small nudibranchs that range in size from a millimeter to 34 millimeters. Due to their small size, it is possible that the specimens may be damaged when extracting tissue for DNA analysis. This is why it is important to either draw or take high quality photographs of my specimens before subsampling. In the Project Lab, I am working on the Automontage, which is a sophisticated microscope camera capable of photographing very small specimens. It snaps photographs of specimens at different focal planes and then combines these images into a single focused image. 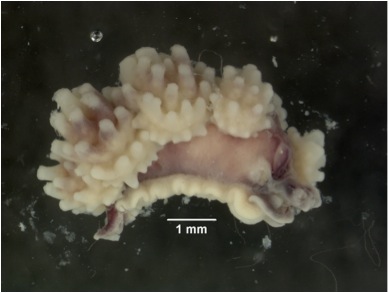 A preserved specimen of an undescribed species from the Philippines. Same specimen as the live nudibranch above. Note the loss of color pigmentation due to preservation in alcohol. Photo taken by C. Shipman.

The Dotidae are an excellent, but challenging group for systematic study since many of them look very similar. Certain Doto were thought to be individual species, but with further study it was revealed that these Doto were comprised of more than one species. These groups of closely related species are known as species complexes. Doto coronata, the type genus, is one such species complex. Many of the Doto are morphologically indistinguishable, yet could be different species since they feed on different prey. The photographs taken with the Automontage will be used to pinpoint small morphological differences between closely related species.

Presently, I am photographing Doto specimens donated by Bernard Picton, the marine invertebrates curator at the National Museum of Northern Ireland. The North Atlantic harbors many Doto that need to be studied in greater detail to determine if there are in fact more species within species. My project has great potential for helping scientists better understand the process of speciation and will provide us a better idea of how this family is related to other nudibranchs within the suborder Dendronotina.