I present to you, three new species of nudibranch!

I’ve been looking forward to writing this blog post for years!  I am happy to share with you my very first species descriptions, which were published on April 15, 2014 (a nice birthday present for me!).  The first thing that you should know about describing a new species is that it takes a LOT of work.  It is very important that a description is detailed enough that other people can actually identify that species.

Some of the difficulty today in species identification comes from old descriptions that just aren’t detailed enough, or that focused on describing characteristics that aren’t actually very useful for telling species apart from each other. In the group of nudibranchs that I study, the majority of species share a common color pattern of orange spots, so unless you describe other features unique to a species, it will not be very easy to identify.

As exciting as new species are, the descriptions themselves can be quite technical.  Unless you are an expert in a particular group, the description may be difficult to understand, and in that case, dare I say it, boring.  I remember the first time I ever read a description of a nudibranch- it was pretty unintelligible to me, filled with jargon such as radula, papillae, and receptaculum seminus!  These days, this jargon has become a part of my daily language, though I will spare you from that in this blog post!

Before I introduce you to the new species, I will give you a little background about the group that I study. I study nudibranchs that belong to the genus Gymnodoris.  Gymnodoris nudibranchs are found throughout the Indo-West Pacific Ocean and Red Sea.  They are found in areas like the Philippines, Papua New Guinea and Hawaii.  The most interesting feature of this genus is that most species are predators of other nudibranchs and sea slugs.  A few species are even known to be cannibalistic, eating members of their own species.  While many are difficult to tell apart on the outside, they often have differences on the insides of their bodies. 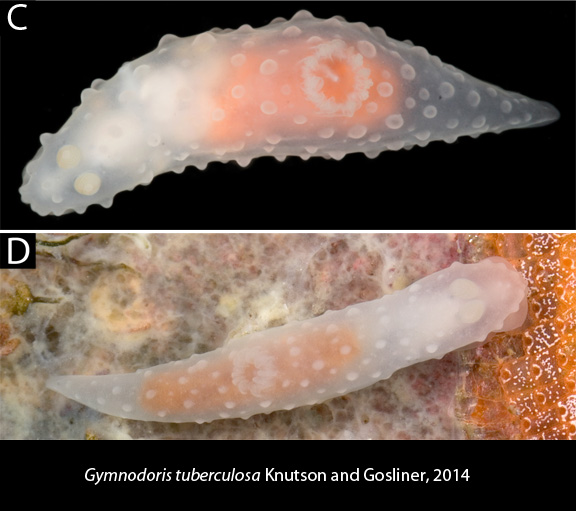 Gymnodoris tuberculosa
This species can be found throughout the Indo-West Pacific Ocean.  It has been seen in places like Papua New Guinea, the Philippines and the Marshall Islands.This species is relatively small, around 2 cm in length. It is translucent white in color and covered in bumps. Distinctive white/yellowish  glands can be seen through the skin on the sides of the body (although these are not obvious in the images above). These glands may store and secrete toxins for defense. The short gills on this animal are arranged in a circle. This species is usually found in relatively shallow depths of less than 30 ft. It appears to be active at night, where it can be found crawling around on the bottom. 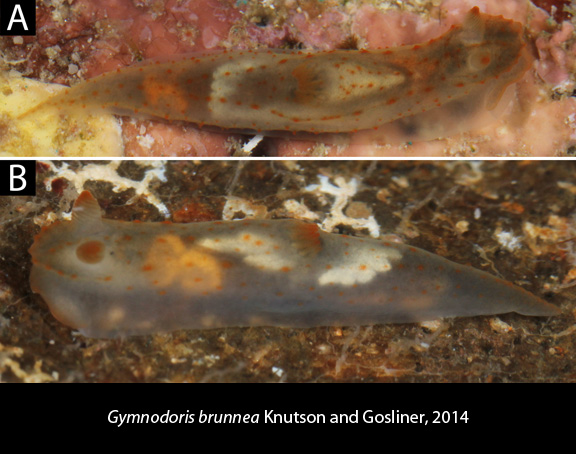 Gymnodoris brunnea
So far, we have only encountered this species in one part of the Philippines.  We found this species, along with Gymnodoris pseudobrunnea, in shallow water underneath a pier in Anilao.  This species is also small in size, less than 2 cm in length.  The color is brownish, transparent and covered in orange spots.  The gills of this species are arranged in a row, rather than a circle.  This species is active at  night, where it can be found crawling over a sandy bottom. 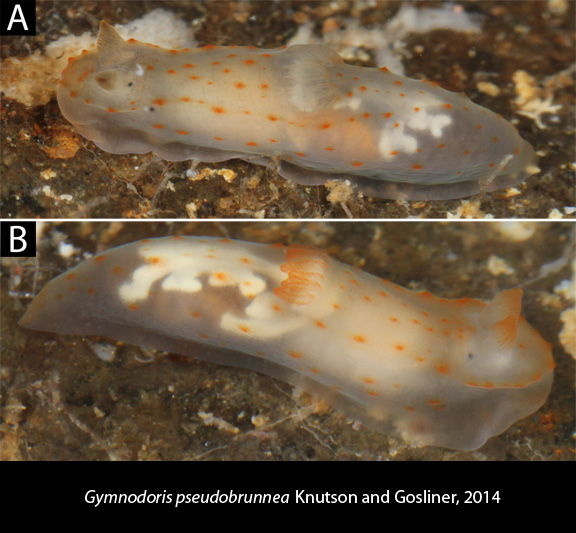 Gymnodoris pseudobrunnea
As with the previous species, so far we have only encountered this species in Anilao in the Philippines. It looks very similar in appearance to G. brunnea, and is translucent and sometimes brownish in color.  There are internal differences that differentiate this animal from G. brunnea, including the shape of the teeth, and arrangement of the reproductive organs. This species also lives on a sandy bottom and is active at night. As I mentioned previously, most of the species in the genus Gymnodoris feed on other nudibranchs and sea slugs, so I am often looking through stomach contents to try to identify prey items. While I was working on these descriptions, I had a fun surprise when I dissected a specimen of G. pseudobrunnea to find an undigested nudibranch in its stomach… after careful examination, I identified this prey item as G. brunnea!  So it turns out that G. pseudobrunnea eats G. brunnea.  The discoveries never end!

For those of you who are interested in the technical aspects, this blog post was based on the following:
Knutson V.L. and T.M Gosliner. Three New Species of Gymnodoris Stimpson 1855 (Opisthobranchia, Nudibranchia) from the Philippines. The Coral Triangle: The 2011 Hearst Philippines Biodiversity Expedition. California Academy of Sciences, San Francisco, California 15 April 2014.

It can also be found in the Hearst Special Publication.