I recently prepared two specimens that are both examples of fossorial species. Although this word is similar to “fossil” (both words are derived from the latin word fossa, which means “ditch”), fossorial animals are not remains that have been preserved in rock, but are actually animals who are adapted for digging and living underground. Many people consider these particular species pests, but they’re very interesting animals: the Broad-footed Mole (Scapanus latimanus) and the Botta’s Pocket Gopher (Thomomys bottae). 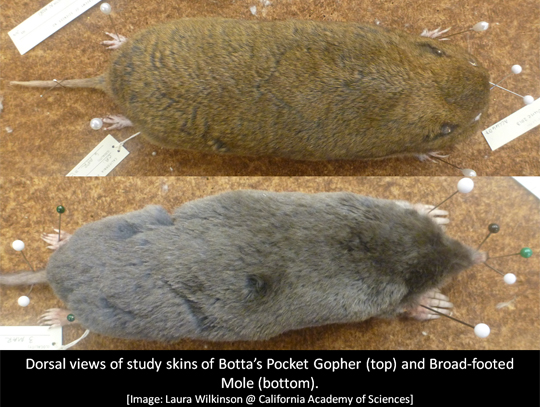 Both species have typical fossorial features: reduced eyes and ears (less areas for dirt to get in) along with large claws for digging. 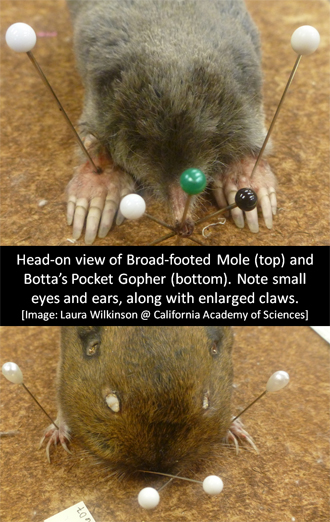 The Broad-footed Mole is in the family Talpidae, an insectivorous family that is closely related to shrews (Soricidae). Moles are completely subterranean, meaning they live entirely underground. Their front feet are made for digging and are permanently turned outward to help push dirt away from them. Because of their subterranean life, their eyes are very small and they do not have external ears, meaning that they rely on their sense of touch from their face, legs, and tail. They eat worms and insects that they find in the dirt. It’s difficult to find a photo of a live mole, since they spend the majority of their time underground. This photo is of a live European Mole, which has the same features as our Broad-footed Mole. 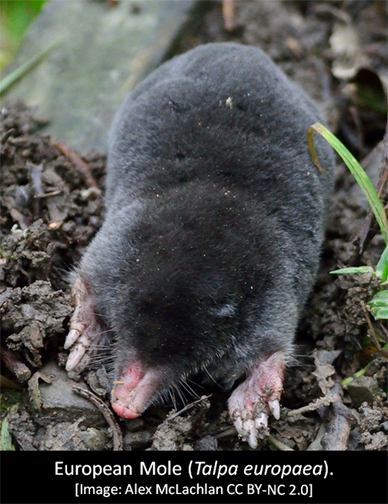 The Botta’s Pocket Gopher is typically the bane of gardeners. An herbivorous rodent, the gopher eats plants by pulling them into burrows by their roots. This obviously is not helpful when trying to keep your garden thriving, but burrowing animals actually help aerate the soil. Gophers have eyes that are a bit larger than moles’ and they have small external ears (the ears of this particular specimen were 9mm), but they still have large claws that aid in digging.

From a previous post that I wrote about mammal skulls, you can see that the skulls of these two animals are completely different: moles have flatter, elongated skulls with rows of sharp teeth (for eating worms and insects), while gophers have typical rodent skulls with two enlarged incisors (for cutting through plants, with molars for breaking down the plant material.) 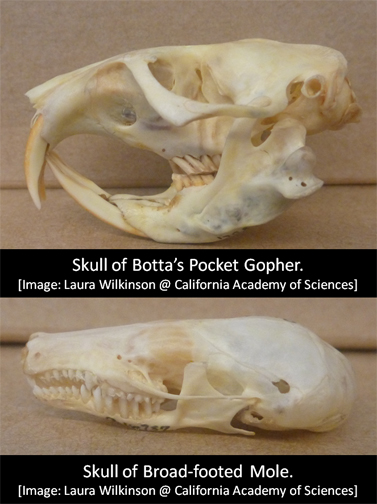 While these fossorial mammals may seem like pests in your garden, remember that they each have specific purposes and fill important environmental roles. If you feel that you have to remove the ones in your garden, please do not use poisons. These toxic chemicals can make their way up the food chain and kill larger predators such as snakes, hawks, owls, and even house cats. You wouldn’t want someone poisoning your food, so don’t do the same thing to the wildlife!

Next time you see evidence of a fossorial animal, think about all of the unique adaptations they have to live underground, and try to appreciate them for what they are: cool animals!.