When recalling my adventures in the Philippines, extreme oceanic beauty contrasted with heart-wrenching poverty comes to mind. The objective of the trip was to experience the center of the center of marine biodiversity, which is the Verde Island Passage within the Coral Triangle of the Indo-Pacific. For two weeks I stayed at Club Ocellaris, a dive resort in Anilao, situated on the Balayan Bay, which is a boat ride from the Verde Island Passage. More nudibranchs have been discovered and described here than any marine ecosystem on earth. Club Ocellaris was chosen, since it was the resort utilized for the marine portion of the Academy’s 2011 Hearst Expedition.

Alexis Principe, my dive guide, is excellent at spotting small marine organisms, like nudibranchs, in their natural environments. After my first dive, it was apparent that the Coral Triangle was a truly unique and magnificent place. My fondest diving memory was seeing three flamboyant cuttlefish and a coconut octopus at a muck site. Muck sites comprise of loose sediment, coral rubble, and some trash. They are excellent for viewing juvenile and exotic organisms adapted to creating homes out of garbage.  Anilao is well known for its exceptional muck diving. 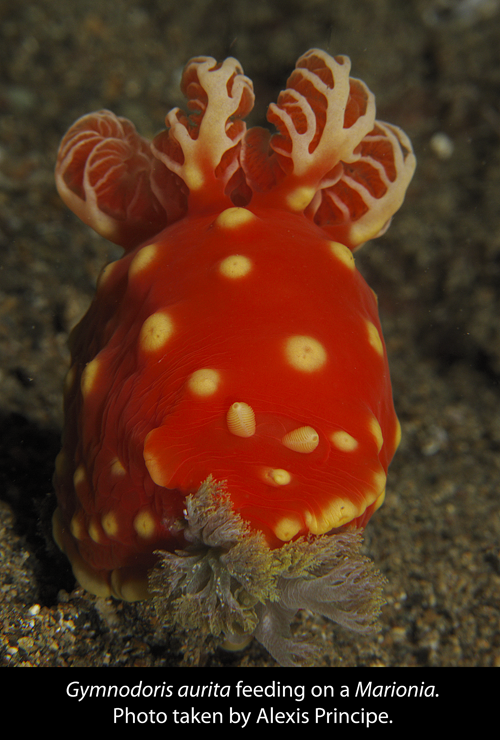 On my first night dive, Alexis found two nudibranchs, a Marionia sp. and a Gymnodoris aurita. He swam over to the Marionia and transplanted it to the rock on which the G. aurita was resting. Prior to SCUBA diving in the Philippines, I watched a YouTube video of a Gymnodoris feeding on a Hypselodoris, so inevitably I expected the G. aurita to feed on the Marionia. I felt quite sorry for the Marionia. The compassion felt for it was quite absurd considering my systematic research requires sacrificing Doto nudibranchs.

I also had the pleasure of seeing three different species of Indo-Pacific Doto, which are a part of the research I am working on within the Project Lab. These were Doto ussi and the two un-described species Doto sp. 2 and 7. Patricia, an avid diver from London, collected Doto sp. 2 and 7 to bring back to the resort for a brief period. It was awesome to finally see my research subjects alive.

Another amazing encounter was a pygmy seahorse on a gorgonian at less than thirty feet on a night dive. They normally inhabit soft gorgonian corals in much deeper waters. Alexis suspected a diver had transplanted the gorgonian to a shallower depth. Alexis brought back a Baeolidia sp. 3, which was a spectacular nudibranch to behold.  When it crawled, it reminded me of a centipede, since its cerata resembled the legs of a centipede. 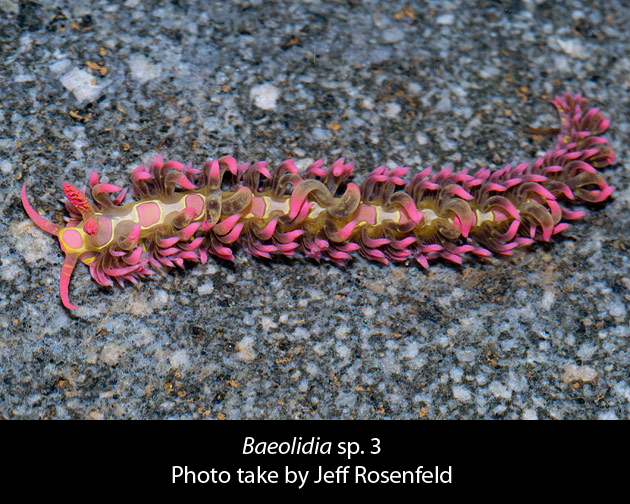 Once my Masters is completed at the Academy, I wish to pursue a PhD studying the anti-cancer compounds of sea slugs native to the Coral Triangle. Most of the marine slug species found here have not been investigated for anti- tumor agents. With thousands of species to be looked at, there is more than enough research to last a lifetime.