DNA and Its Importance in Taxonomy

The basic hierarchy of classification is described below for the sea slugs I study in the Project Lab. This listing is an oversimplification of hierarchical classification since there are categories between those shown.  The hierarchical names of organisms reflect the general physical attributes of the organisms placed within these groupings.   For example, all of the animals within the Mollusca share the feature of being soft-bodied. 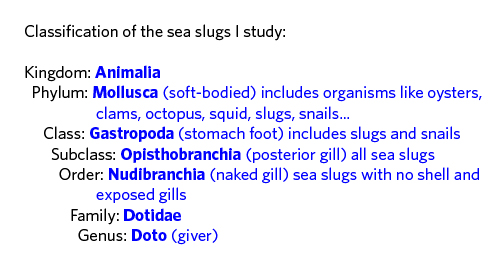 You may have heard of scientific names before, and perhaps you noticed that they contain two parts. Scientific names of organisms include the genus followed by the species name.  An example of a species within the sea slug family I am researching is Doto ussi.  Taxonomy is important since other scientific disciplines like conservation and drug discovery hinge on organisms being classified and named.

Prior to being able to sequence DNA, organisms were described and categorized solely by their distinct morphologies (physical characteristics) and ecological roles.  The ability to sequence DNA has revealed a great deal more about where an organism belongs taxonomically and helps pinpoint new species.  DNA is now used alongside morphology and ecology to substantiate an organism’s distinctiveness in the biological world. 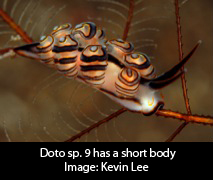 A component of my graduate project is looking at the DNA of Doto sea slugs of two different morphologies from the Indo-Pacific. These morphologies include specimens with a short body and elongate body from Indonesia, Papua New Guinea, and the Philippines. Prior to in-depth study, these elongate individuals were placed within the sea slug family Dotidae, despite their unique appearance. 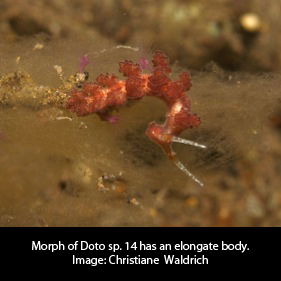 DNA sequences from these individuals will be compared to those of the short bodied to determine if these elongate specimens should in fact stay within the Dotidae. We do not really know where these specimens belong taxonomically, since they are new to science. This is very exciting since a new genus or family may need to be created to accommodate these individuals. It is discoveries like this that make science so rewarding and fun! DNA has truly changed how we do science and has made the classification of organisms more concrete.