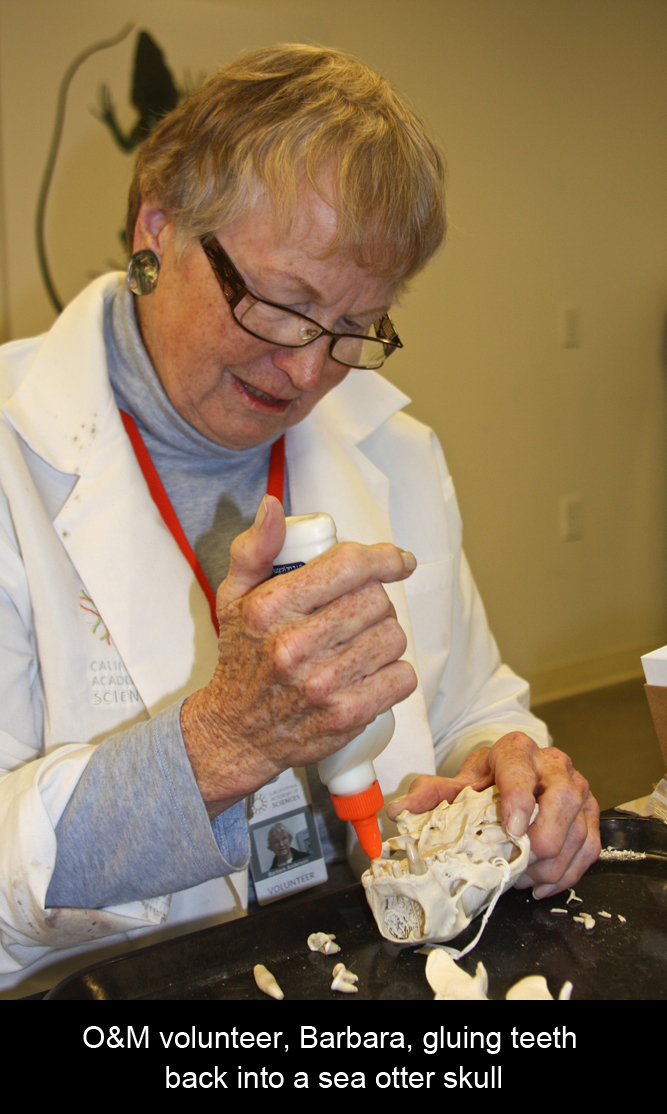 Barbara is a facial reconstructionist. She laughs as she says this, and gently reconnects the hinges of the jawbone of a baby sea otter. I find Barbara immersed in her Tuesday routine - neatly numbering bones and gluing skulls together. Barbara has been volunteering at the California Academy of Sciences, one day a week, ever since her retirement 15 years ago. She has worked in all three CAS’s: the original museum in Golden Gate Park, the Howard Street location and the current renovated museum. And now, stationed in the Project lab, she seems at once an adept puzzle solver and creative artist, dipping her finger in Elmer’s glue to adhere a bone fragment back to the cranium of an adult male Sea Otter.

She shares some of the things she never thought she would learn, “See this bone,” she says. It is a long straight bone, which seems disproportionately big to connect to the skull in her hands. “This is a baculum, a penis bone. It is kept with the skulls to differentiate their sex.” She moves on to tell me the other notable species she has numbered: Kangaroo, hippo, giraffe, to name a few. “Not the entire skeletons,” she explains, “but you certainly learn things you never thought you would.” 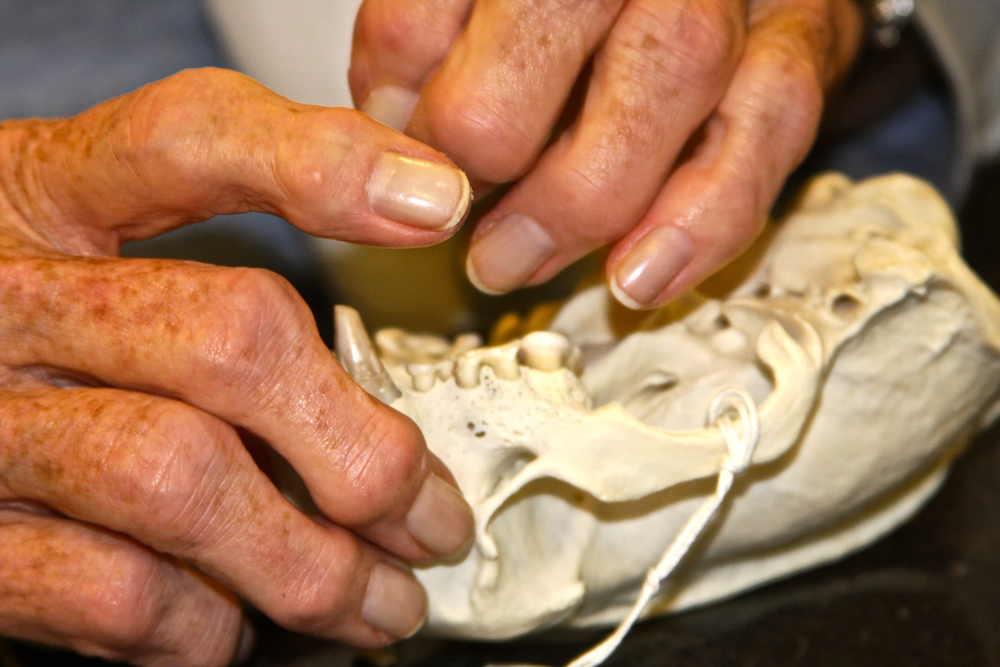 Barbara likes the interactive function of the Project lab where she has recently been working. She digs through the pile of boxes on her left and pulls out a baby skull to show me where you can see the baby teeth coming through. She says, “I can’t help but wonder, do they get toothaches?” She loves the opportunities she gets to share her curiosities with the public. “It’s interesting for young people to see that other baby animals go through the same process of losing their teeth. It’s something they can relate to, and maybe even get a better idea of how things work in their own bodies.” She runs her hand over the half grown tooth and puts it back in the pile of finished skulls.

Barbara also gets a window into more serious ailments we share with Sea Otters and other species. She remembered the challenge of dealing with a Sea Lion skeleton with Osteoporosis. One of the amazing gifts of having the collections is the opportunity for knowledge, not just about specific species, but also about shared diseases and our interconnectivity.

She has been working on Sea Otters for close to ten years. “But no,” she says “the work has not become redundant; it changes all the time.” She gets in her zone and it can be meditative. “I like to make it a leisurely day,” she says, “I come early and sit with a scone and some coffee and watch the public.” Barbara is an avid birder, one of many reasons she was interested in volunteering for the CAS. She also used to be a librarian and worked in Silicon Valley for a company, which shared databases between libraries. Her passion for sharing is evident and the Project lab provides a great opportunity to see her at work and ask her questions about the creatures she has helped document for CAS over the last decade and a half.