I recently prepared a study skin of a rat that needed its species identified. It got me thinking about how difficult mammal species can be to distinguish from each other. Like an earlier blog I wrote about the Rock Hyrax and identifying mammals by skulls, I thought I’d take another opportunity to walk through the steps we sometimes have to go through to figure out what species we’re working on, but this time by external characteristics only. Consider this a “Local Rats 101” of sorts.

To start off, I feel the need to make the disclaimer that I love rodents. I think they’re absolutely adorable, as are the majority of all small mammals (well, most mammals in general, really). With that out of the way, let’s get started.

Here’s the rat that I prepared:

It was given to us by one of our usual donors who finds birds and mammals throughout Northern California and brings them in to us. He, however, is a bird specialist, and isn’t as confident with his mammal identification. He guessed that this rat species was the Dusky-footed Woodrat, Neotoma fuscipes. Woodrats are a native to North America, unlike the Old World rats that I’ll mention shortly. They’re very soft and fluffy and have large ears and hairy tails. True to their name, they collect wood debris and pile it into huge nests that can be 3-8 feet across and up to 6 feet high. These nests are used as shelter by other rodents, as well as reptiles and amphibians. You can sometimes find nests while hiking or mountain biking along trails with lots of oak trees. 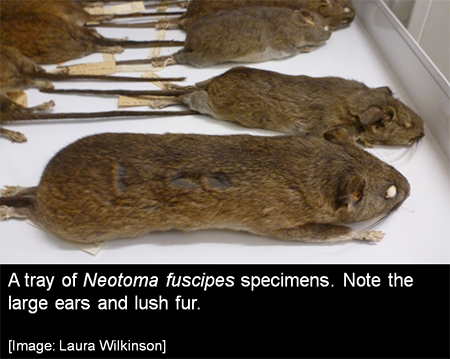 If you compare the rat that I prepared to a woodrat, you can already see that they look quite different. The woodrat fur is longer and softer, the ears are much bigger, and the tail is hairy (though that might be difficult to tell from the pictures). So, Neotoma fuscipes is ruled out, but it was a good guess by this collector!

We’ll move on to the two common Old World rat species: the Black Rat or Roof Rat (Rattus rattus) and the Brown Rat or Norway Rat (Rattus norvegicus). Both of these species are thought to have originated in Asia and have since spread throughout the world to become two very common species. They look very similar but have two key differences: ear size and tail length. 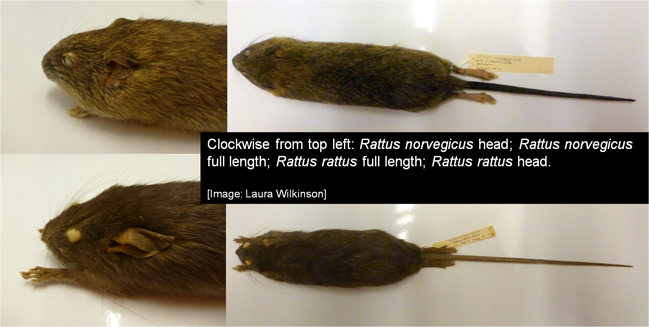 Rattus rattus have larger ears and long tails that are longer than half of their total length (tip of nose to tip of tail). Rattus norvegicus have smaller ears and shorter tails that are less than half of their total length. This is one reason why it’s so important that we take measurements of all birds and mammals that we are about to prepare for the collection; having the original measurements can help distinguish different species, especially since their measurements might be slightly altered during the preparing process. Bodies can stretch out or shrink, making an animal deceptively larger or smaller than it originally was.

From this information, we can go back to the rat that I prepared. The measurements that I wrote down were: ear length 22 millimeters (mm), total length 380 mm, and tail length 175 mm. Since the tail is less than half the total animal length along with the small ears, this is Rattus norvegicus, the Brown Rat.

I always love a chance to use my powers of deduction when “mystery” specimens get donated to us. Next time you see a rat scurrying around (hopefully outside and not in your kitchen), take a moment to consider it as the cute mammal it really is - you might get a new appreciation for rodents!