Visitors at the Naturalist Center are interested in all kinds of things. Rattlesnakes seem to be a perpetual fascination.

Visitors often ask about the differences between a rattlesnake and its look-alike, the gopher snake. The two snakes have similar colors and patterns. Gopher snakes also exploit this morphological similarity by imitating rattlers, even shaking their non-rattle adorned tails to make a buzzing noise.

So how do you tell them apart?

California Herps is one of our favorite sites for snake info. They have a link to this sign by the East Bay Regional Parks District which says that a rattlesnake has a triangular shaped head, which is bigger than its neck, a thicker body and a blunt tail with one or more rattles. Gopher snakes have heads that are not triangular and only slightly larger than the neck. They also have pointy tails, rather than rattles. 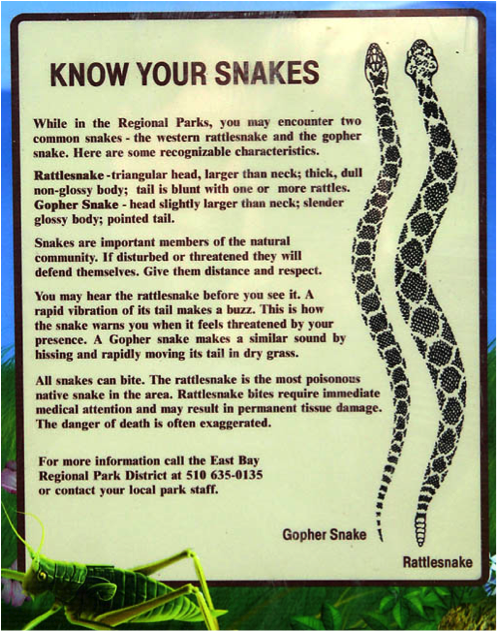 Would the rattlesnake would ever attack or try to eat the gopher snake?

According to one of our biologists, in the wild rattlesnakes are primarily rodent and sometimes lizard eaters. They simply don't recognize other snakes as potential prey items. Interestingly, in the U.S. the non-venomous kingsnake IS a snake eater (along with rodents and lizards) and often will eat rattlesnakes. And the million dollar question, what do you do if you see a rattlesnake? Do you run? Do you try to scare it away?

According to the Tuscon Herpetological Society:
"If you encounter a rattlesnake, keep in mind that once it senses you it will be just as nervous as you are. The snake has good reason to be afraid. By sheer size alone, you are much more of a threat to the snake than it is to you. Move slowly and deliberately when close to a rattlesnake and back away to a safe distance. Usually, the snake will either hold its ground or move away from you. The rattlesnake will not chase you. If the snake moves toward you, back away; it’s probably just trying to get to a secure location just behind where you were standing. Keep tabs on the location of any rattlesnake and alert people in the area to be cautious. Pets should be restrained until the snake moves on."

The California Department of Fish and Game, also recommends keeping your distance when encountering rattlesnakes and states that they are not normally aggressive, unless provoked, so throwing things at them probably would not be the best idea. Their website also has tips on what to do if you are bitten by a rattlesnake and ways to avoid encounters with rattlesnakes in the first place. Any other rattlesnake questions? Feel free to post them in the comments, or send them to us at Naturalist@calacademy.org. In fact if you have any other reference questions, an unidentified natural history specimen or need some assistance finding an awesome science book to impress your friends with, we’d love to help. We're available by phone, email, and of course in person on the third floor of the Academy of Sciences.