May 22, 2012
Gulf of Guinea Expeditions
by Robert Drewes 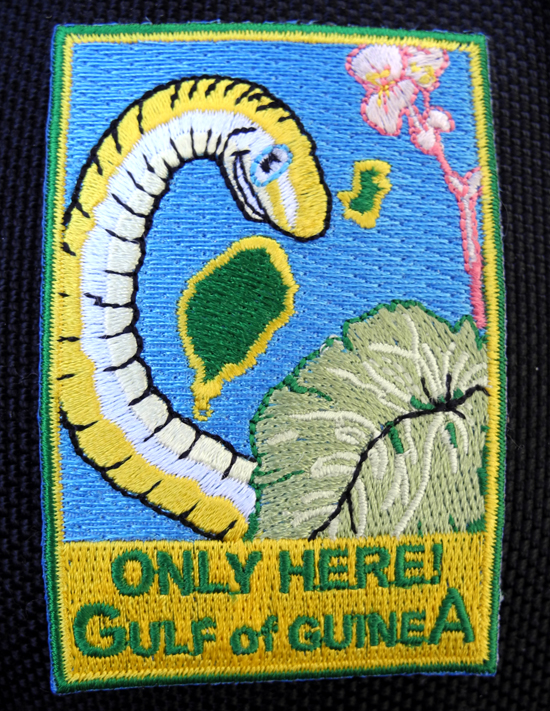 All of the GG VI participants are home now, and our specimens and materials are safely ensconced in their respective departments at the Academy.  For the first time, we had an official patch for the expedition. The original design of the cobra bobo and giant Begonia was drawn by one my graduate students, Dashiell Harwood. The patch was produced by our friend, Mike Murakami, who played such an important role in the production of the biodiversity coloring books (more about the education project below.) We gave many of these stick-on patches to third grade teachers to hand out as incentives to hard-working students.

Soon after Dr. Tomio Iwamoto, our marine ichthyologist and veteran of GGI and GG II returned home to the Academy a few weeks before the last of us, he left for Africa again. And, once again, he is aboard the Norwegian research vessel, the R.V. Nansen, as a senior scientist. I devoted an entire blog to his last trip aboard the Nansen, a couple of years ago.  They are trawling for deep water fish off the coast of Guinea Conakry. I believe the ship will also be exploring the coast of Mauritania in the following weeks. Since he left before we returned we have not been able to discuss his findings during GG VI; but below is a photo of the strange pipefish he and and Dr. Brian Simison seined in northern Sấo Tomé 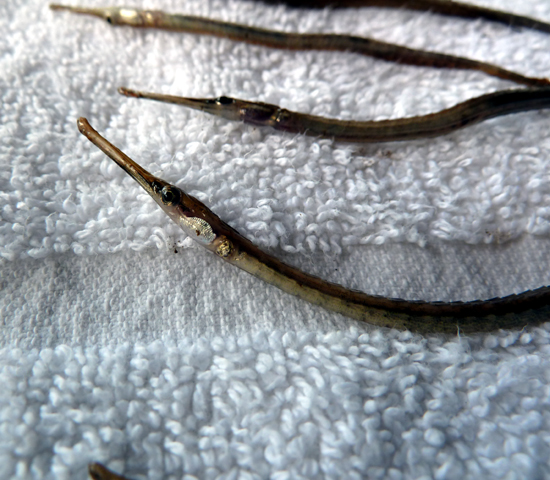 Microphis, the only member of its family reported from Sấo Tomé and Príncipe. (B. Simison-GG VI)

Our botanists had a “a field day,” so to speak.  Recall that Jim Shevock (right) made 682 collections during GG IV, and this time he figured he would just pick up a few things he missed.  Not so. He estimates that among the 647 collections he made in GG VI are between 50 to 100 species of bryophytes he had not seen before, and these include at least 12 genera of liverworts and 12 genera of mosses that are new to the islands.
Miko Nadel (left, above) really has his hands full trying to sort out the lichens; there are 129 previously known species, but Miko made 475 collections, many of which will undoubtedly be new.  He tells me that lichenologists classify lichens by the supporting fungus rather than the symbiotic algae. 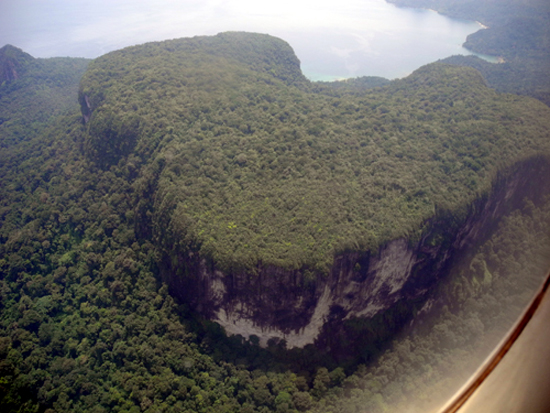 In an earlier blog from the islands, I reported that Jim, Miko and our photographer Andrew were the first CAS workersto study the top of Pico do Sấo Tomé. Later on Príncipe, Jim and Miko became the first of us to reach the top of Pico Mesa (above).  Because they had to walk there rather than reaching the base by boat, they were only able to explore the northern most reaches of it; it appears to be a botanist’s paradise, and we will definitely return. Dr. Tom Daniel (GG III and IV) is particularly interested in getting up there as Miko photographed an endemic Impatiens at the top. 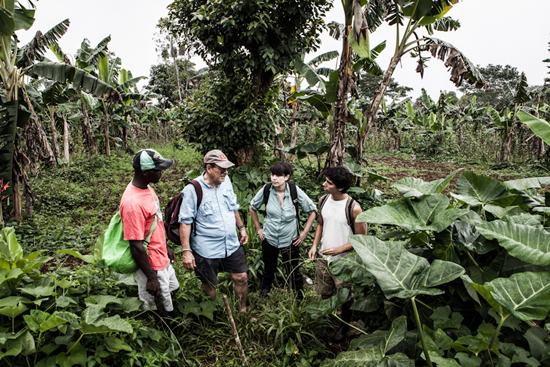 The herpetologists also did well. Rayna and I were assisted by a young Portuguese biologist, Joao Pedro Pio (far right), currently working on the endangered endemic maroon pigeon for workers at the University of Lisbon. He and his co-workers (including Gabriel, left) accompanied Rayna on all of her nocturnal frog hunts. 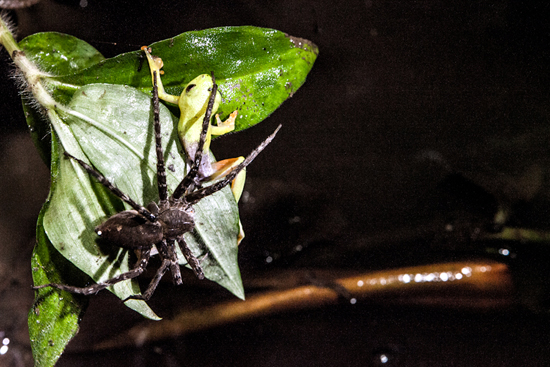 Above is Hyperolius molleri, the oceanic treefrog typically inhabiting the lower elevations of both islands. This particular frog is being devoured by a wolf spider and note that it is largely a uniform green in color. In many earlier blogs, I have included images of the Sấo Tomé giant treefrog which is much bigger, has bright orange and black markings and is typically found above 1100 meters. 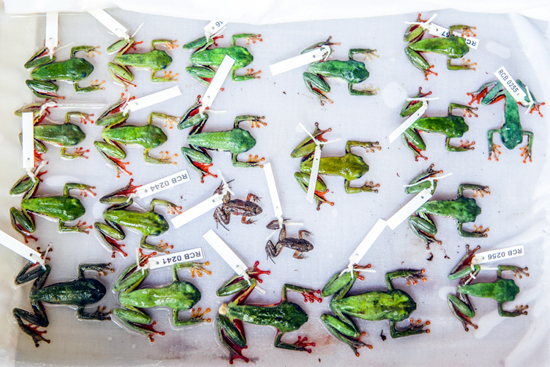 Rayna’s sample from between 700 and 900 meters would strongly suggest that the two species are hybridizing at this level.  This is pretty exciting in that, if supported by genetic analysis, it will fit right into her PhD thesis at Cornell University. 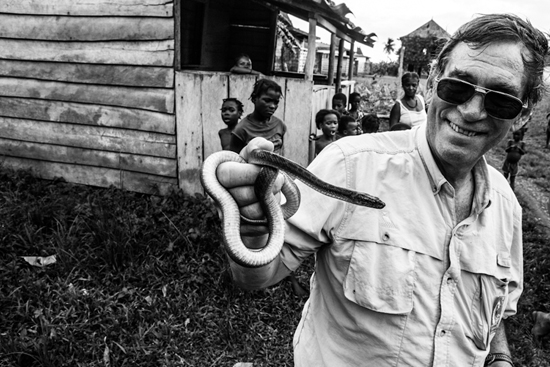 While I failed to find adult specimens of the Príncipe shrew which we know to be endemic and distinct from the Sấo Tomé shrew, we did find the largest “cobra gita” (house snake: Lamprophis sp.) we have ever seen and from a new locality.  This, too, we know to be a distinct species from the Sấo Tomé Lamprophis, but we have thus far been unable to describe it. This is because there are many species of the same genus on the African mainland, and their relationships are poorly understood. So while we know the two island species are distinct from one another, we cannot guarantee that one or the other (or both) does not also occur on the mainland. 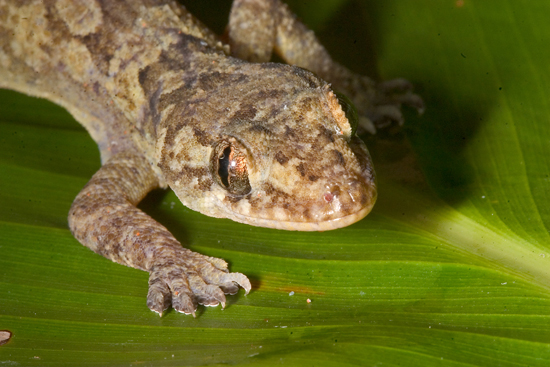 While we were on Príncipe I received word that the description our new species of gecko had been formally published, so above meet Hemidactylus principensis.  Like H. greeffi, its nearest relative on Sấo Tomé, it lacks the thumbnail on the first toe, but otherwise, the two are very, very different.

Dr. Brian Simison’s finding that there are no limpets on either Sấo Tomé or Príncipe is intriguing.  Brian informs me that so far as he knows, Sấo Tomé and Príncipe may be the only oceanic islands that lack them.  They are present on the Cape Verde Ids, the Seychelles, etc. 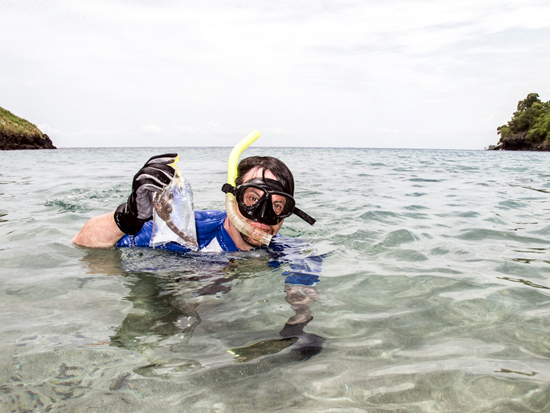 This leads to the possibility that there may be something in the volcanic rock making up these islands that precludes the presence of these mollusks. 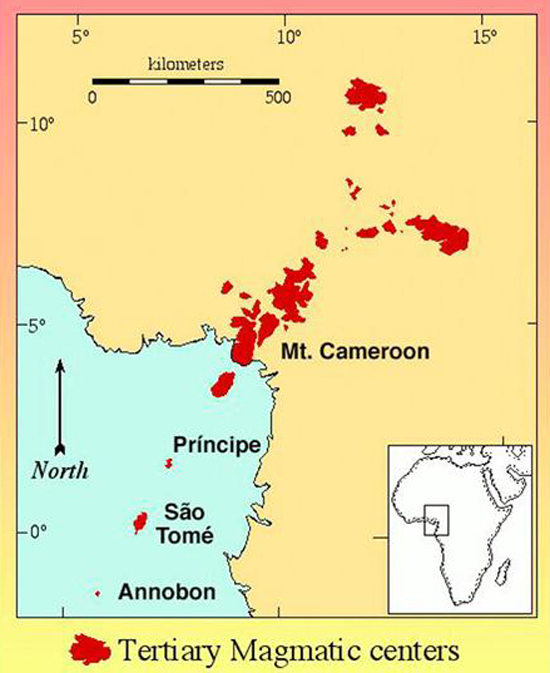 Recall from earlier blogs that all four of the Gulf of Guinea Islands, plus Mt. Cameroon, the Cameroon highlands and even the Jos Plateau of Nigeria all originated from magmatic extrusions up through a 3,000 km-long linear fissure or rift that transects both the marine and continental parts of the African plate known as the Guinea Line; extrusion of magma occurred at various times from over 60 million years ago to the very recent Holocene continental island of Bioko.

The remarkable towers of both Sấo Tomé and Príncipe which appear in these blogs with such frequency are indeed of a rather uncommon, chemically distinct rock known as phonolite, usually associated with geologic hotspots.

One test of the hypothesis that it is something about the rock that is excluding limpets would be to explore the shoreline of Bioko, the youngest of the Gulf of Guinea Ids and the only continental member of the archipelago.  And as luck would have it, our colleague, Rayna Bell will be working on Bioko in a matter of months.  In addition to looking for limpets on Bioko t the presence or absences of limpets along the Gulf of Guinea coast should be documented. If indeed the rock is unsuitable for limpets Brian would predict that limpets would be found on either side of Guinea Line, but not on rocks produced by it. 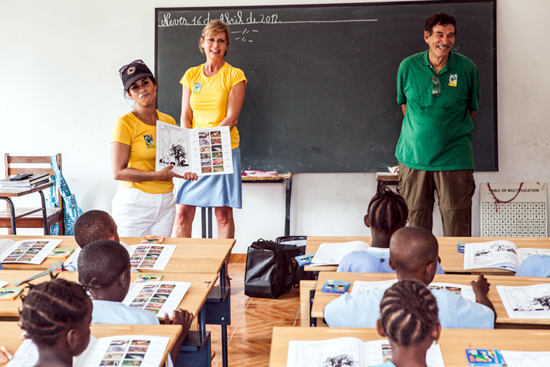 I devoted an entire blog last month to the biodiversity education component of GG VI, and for all of us involved, this was just joyous. We personally delivered 1,840 endemic species coloring books to third graders in 62 classrooms of 17 selected primary schools on both islands. On the big island the schools were in the districts of Sấo Tomé town, Angolares, Trindade and Neves , and on Príncipe  at Santo Antonio, Sundy, Sao Joaquim, Nova Estrella and Praia Abade. 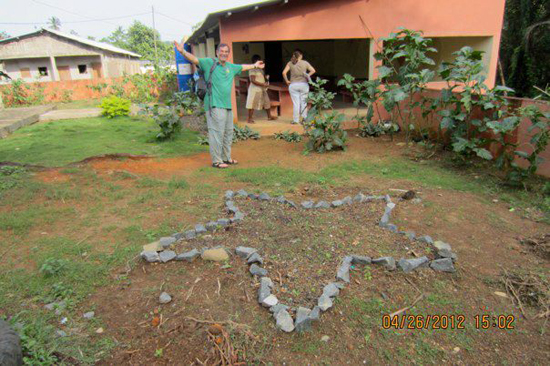 To say they were well received would be a gross understatement.  Again, we thank all who worked on this project (see March 9 blog: Sharing the Wealth; and for those who made GG VI financially possible, see “Partners” below).  At the adult level, we also gave five lectures on the biodiversity of the islands: two in Portugal and three at institutions on the islands themselves. 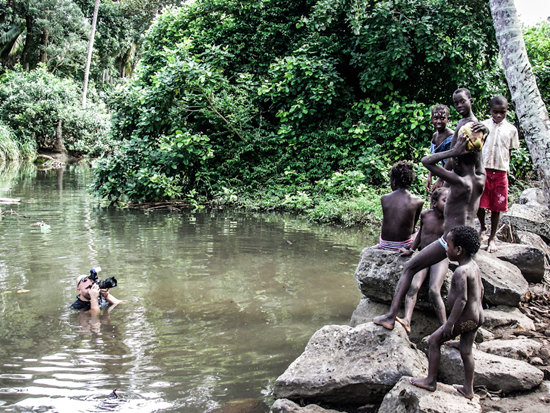 Andrew Stanbridge (above), our photographer on both GG V and GG VI, is a remarkable person in many ways; much more than just a gifted professional artist.  His website is Andrewstanbridge.com

Here are some parting shots: 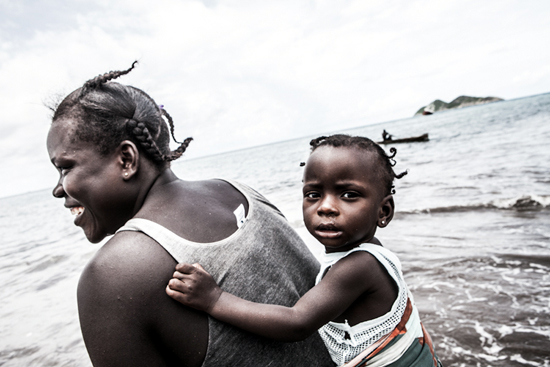 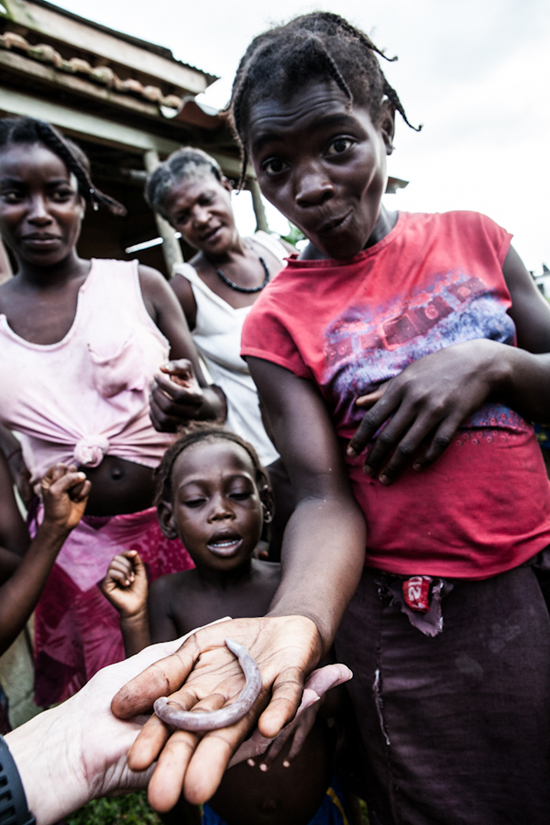 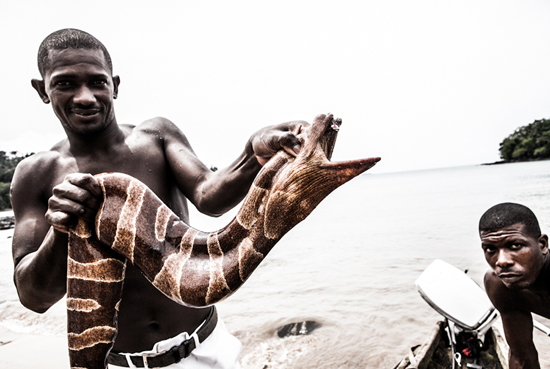