May 24, 2013
Gulf of Guinea Expeditions
by Robert Drewes

During GG VII, just completed, a rather remarkable thing happened which readers should know about. I will write a wrap-up of Gulf of Guinea VII next month, but in the meantime I want to talk about Príncipe Island in general and what has just happened there. 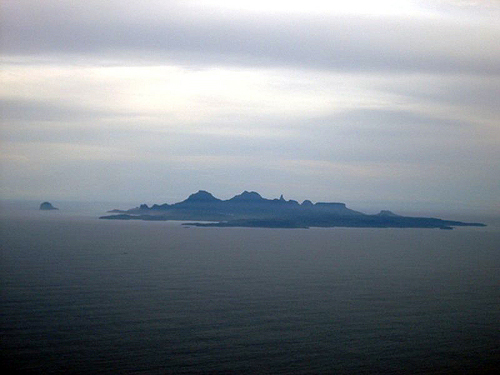 Readers will already know that this blog is about our 13 years of biodiversity work in the Republic of São Tomé and Príncipe. The latter island is about twice as old as the former, at 31 million years. It is much, much smaller, but when it first arose volcanically from the ocean floor it was nearly four times the current combined area of both islands today. 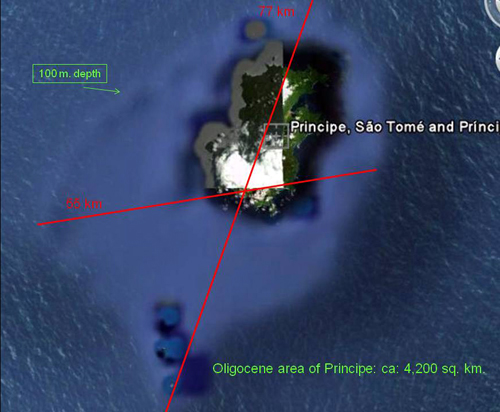 Príncipe’s great age is responsible for its remarkable appearance, a landscape punctuated by ancient steep volcanic plugs and a mesa, mostly made up of a rather rare rock known as phonolite.

Isolated for so many millions of years, it also harbors a large number of unique plants and animals we call endemics; organisms that have arrived on the islands by random dispersal, established colonizing populations that have accumulated genetic change over deep time, so that they are no longer the same as their ancestors on the mainland.  An endemic species is one that is found only in one place, nowhere else. 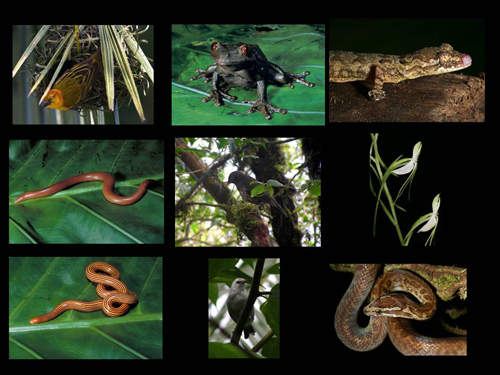 All of the species above are unique to Príncipe Island and nowhere else in the world.  There are many more not pictured, but fewer than on São Tomé because that island is much larger, thus more niches. Virtually every one of our expeditions has turned up new, undescribed species from both islands as they remain incompletely known. Our work on these islands has been ongoing for 13 years and has included over 40 scientists of different disciplines and their graduate students.
A year or so, I was contacted by scientists from Madeira to provide information in support of an application to have Príncipe Island established as a World Biosphere Reserve by UNESCO.
UNESCO defines World Biosphere Reserves thus:
Biosphere reserves are sites established by countries and recognized under UNESCO's Man and the Biosphere (MAB) Programme to promote sustainable development based on local community efforts and sound science. As places that seek to reconcile conservation of biological and cultural diversity and economic and social development through partnerships between people and nature, they are ideal to test and demonstrate innovative approaches to sustainable development from local to international scales.
Biosphere reserves are thus globally considered as:
•    sites of excellence where new and optimal practices to manage nature and human activities are tested and demonstrated;
•    tools to help countries implement the results of the World Summit on Sustainable Development and, in particular, the Convention on Biological Diversity and its Ecosystem Approach;
•    learning sites for the UN Decade on Education for Sustainable Development.
I was delighted to supply supportive lists of floral and faunal species and photographs to illustrate the uniqueness of Príncipe, as this would be a wonderful opportunity  for this tiny island with fewer than 5,000 inhabitants.  Although I never received a copy of the completed application, I learned some months ago that the application had been successful, and that Príncipe Island had indeed become a new World Biosphere Reserve!!
What I did not anticipate was that I and my team would be on the island at the same time as the formal presentation. We were invited to the ceremony,  Saturday the 4th of May, by Regional President Jose Cardosa Cassandra himself during our annual meeting, and at the same time he asked if I would serve on his
Scientific Advisory Council, a great honor and responsibility. 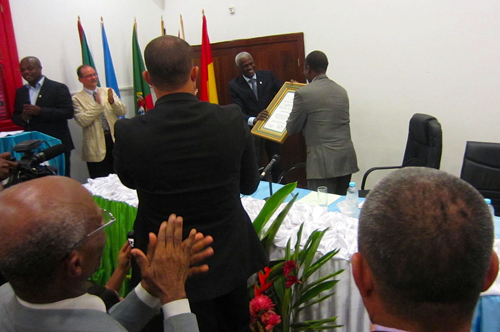 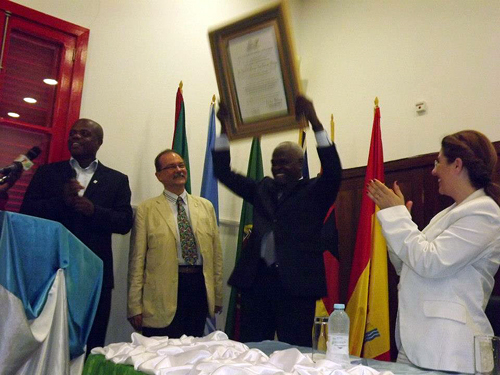 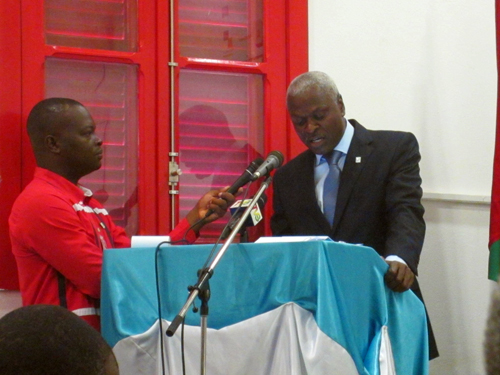 Later, during his speech, President Cassandra acknowledged both me and the California Academy of Sciences by name, as having provided much of the biological ground work for the successful application.  He asked that I stand and be recognized… it was a unique moment, and even more so when the Prime Minister did the same in the next speech! V. Schnoll phot 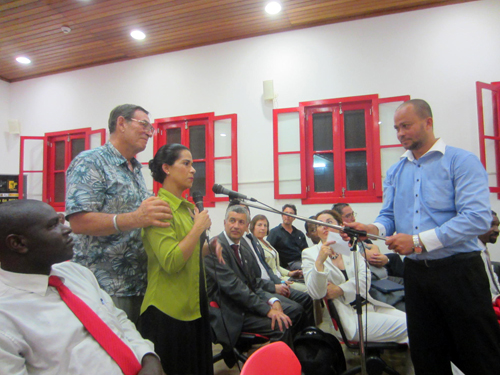 After the formal presentation which included around 250 people, there was a series of panel discussions, in which we took part. The rather odd configuration of Velma Schnoll’s photo above is because President Cassandra insisted that Roberta Ayres (our senior educator on the CAS team) translate for me. Roberta is short, I am tall. 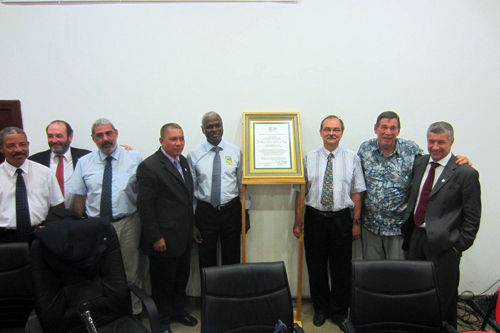 Finally Velma took a group picture. This includes the REDBIOS committee that originally submitted the Biosphere application; on the left is our old friend Arlindo Carvalho, Director General of the Environment He authorizes our research on the islands. Just to the left of the certificate is Regional President Jose Cassandra, and please note that he has put one of our CAS expedition patches on his shirt! To the right of the certificate is the UNESCO representative, and to my right is Dr. Antonio Abreu, whose people first contacted us for the biological information for the application. 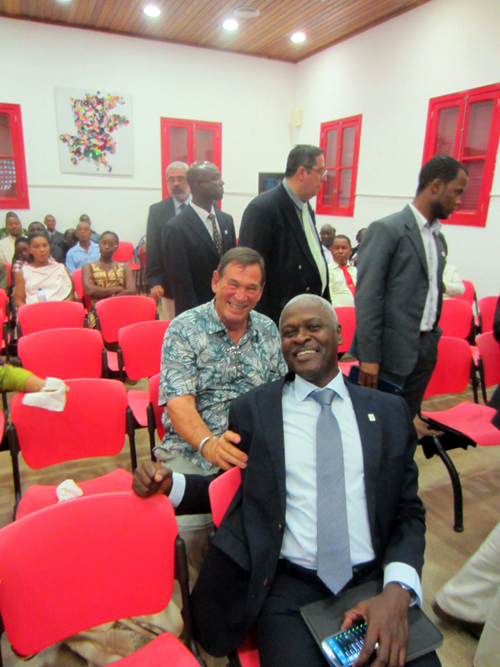 To say that this was a great and joyful day would be an understatement.  We know that our science is importance, and we can see that our Biodiversity Education project is making a difference tremendous with the kids.  But to have contributed to an event of global magnitude for this wonderful island country makes me and I am sure all who have joined me on these many Gulf of Guinea Expeditions very proud.

The next blog will be a summary of what we think we accomplished on GG VII.
The Parting Shot is a teaser: 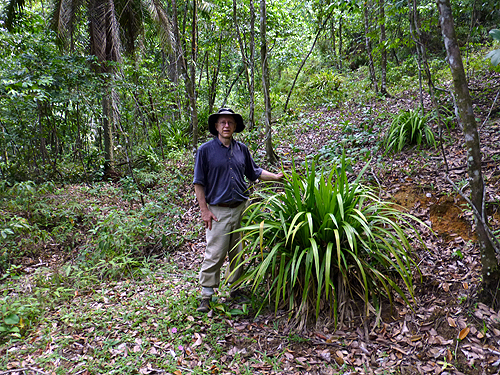