The Race: Our Omali Base and Year's Odds and Ends.

Year’s end and things are busy, even in Academia. Here at the Academy, we are already in planning mode for GG VI but more on that in coming months. We are awaiting the publication of more of our discoveries, and I will report them here as they appear. In the meantime this is a good opportunity to thank all of you who have helped make next year’s expedition a probability: the Herbst Foundation, the “Blackhawk Gang”, and the California Academy of Sciences Docent Council.

As readers know, our mission is not only to discover and scientifically describe what is on these wonderful old islands but to let others know about it, especially the citizens. But, this also includes the business visitor and tourists primarily interested in fishing or ocean activities. The neat unique critters we are studying are not just isolated up in the higher reaches of the forest; many can be found right downtown. You just have to look.

On the beach of Praia Lagarto, between the airport and downtown São Tomé, lies the Omali Lodge. Originally built by a Mr. Hellinger, I remember it in its original incarnation as the Marlin Beach Hotel, one of the best bars in the islands-- a real gathering place. It is small and quite upscale but it retains its original flavor. Folks who know the islands or have been well informed stay at the Omali; it attracts rather fascinating people. 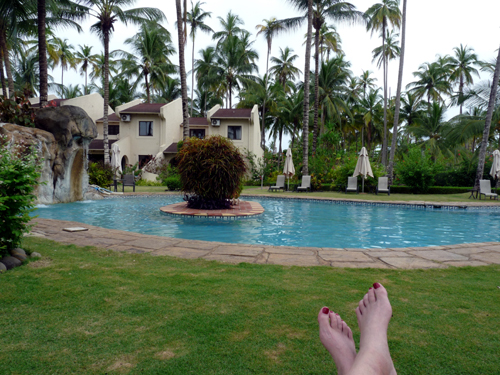 The Omali is pretty fancy digs for a bunch of bush biologists like us but luckily, the Omali’s owners have supported our work by allowing us to stay there during our last three expeditions. As comfortable and friendly as the Omali is, the central thing for our work is a dependable power source (although a post-fieldwork dip in the pool is not too shabby!) 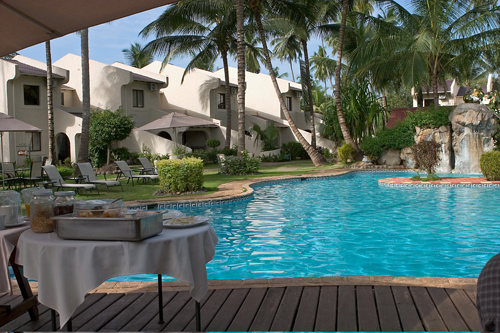 So as a new visitor, if you walk through the foyer and bar out to the back to the pool, you will first be struck by the enormous coconut palms. Ignore them for now; to the left around the back of the kitchen, and behind the rockwork in the pool (above) are several other palm-like trees that aren’t! 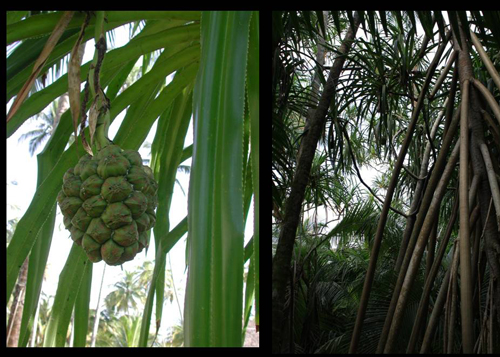 These are the São Tomé screw pines, Pandanus thomensis. You can tell them from the palms by the fact that the base of each tree is supported by a number of prop roots (see right, above). Obviously, these are neither pines nor coconuts; the important thing to know is that these trees are found only on São Tomé, nowhere else in the world. 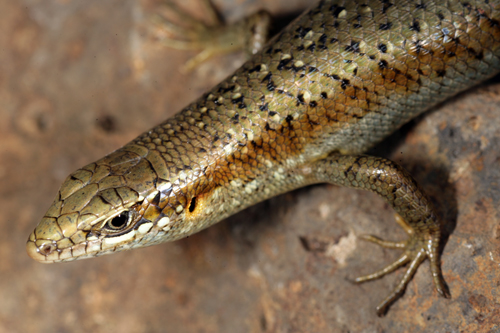 As you walk along the pool, the first quick movement in the grass is likely to be a speckle-lipped skink, particularly common during the heat of the day. These lizards are not unique to the islands but they are very good dispersers across oceanic barriers, and they are found on many of the Atlantic and Indian Ocean islands. Some of our colleagues have looked at the genetics of the São Tomé and Prìncipe skinks and suggest that while they are not endemics, they have been on the islands since long before man arrived. 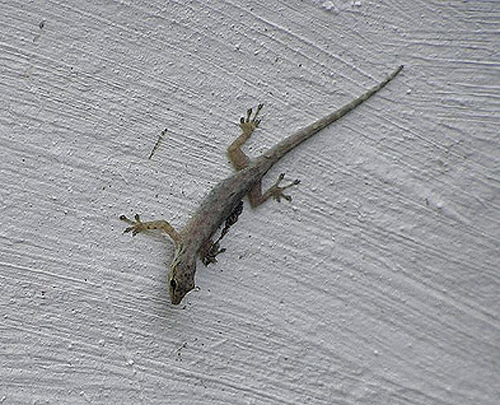 On the walls surrounding the pool and rooms lives the São Tomé day gecko, Lygodactylus thomensis, which shuttles in and out of the shade in search of insects. Most geckos are nocturnal creatures, but this group is secondarily diurnal. L. thomensis is a true endemic whose ancestors probably reached São Tomé millions of years ago; the same is true of its closest relatives, the Prìncipe day gecko, L. delicatus, and the Annobon day gecko, L. wermuthi. 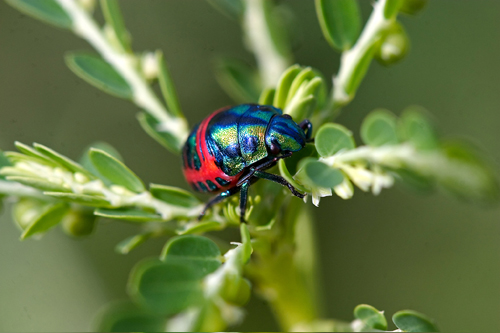 Most of the Omali plants are ornamentals from other parts of the world of course, but this does not mean they do not harbor fascinating species. Our photographer on GG III, Wes Eckerman took the photograph above of a homopteran bug on a bush near the Omali pool. Our entomologists have not been able to identify it beyond the Family Scutellaridae! It is highly likely that an enormous number of the islands’ insects remain to be discovered and described scientifically. 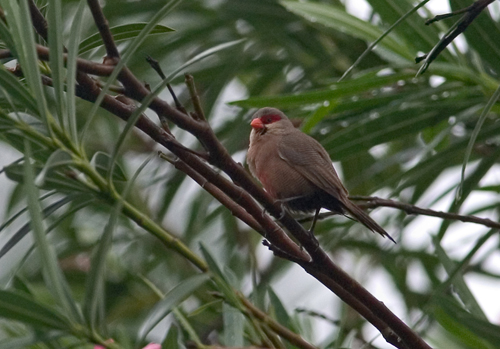 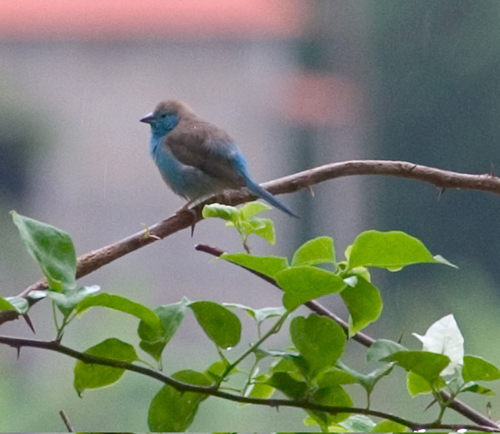 Bird life around the pool is plentiful and entertaining. The most commonly seen birds in the Omali bushes are various finches and waxbills that are of African origin and possibly brought over from the mainland as pets by the Portuguese colonials (above). But the real specialty is the São Tomé Prinia. Prinias are Old World insectivorous warblers; there are about 30 species divided between Africa and Asia. Prinia molleri is the only member of this group in the islands and it is found only on São Tomé, from downtown all the way to the top of Pico at 2,000 meters. As common and seemingly fearless as this endemic little bird is, it is extremely difficult to photograph. It just won’t hold still. 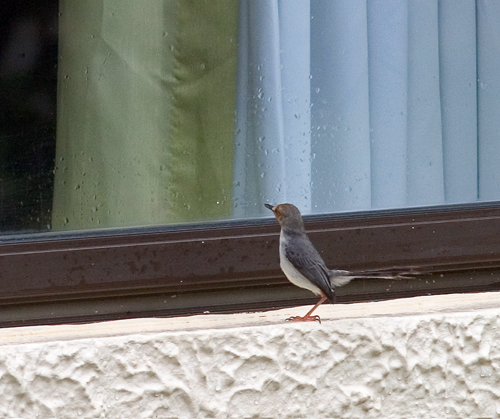 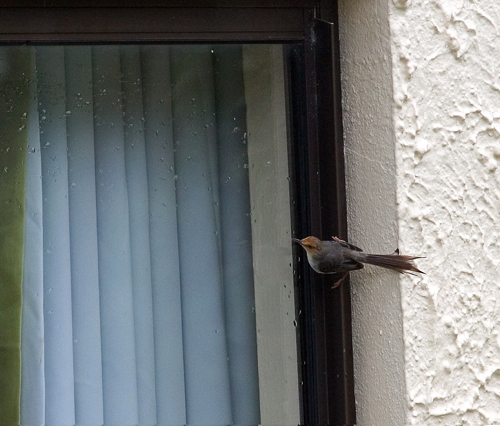 Finally, lying around the Omali pool it is impossible not to notice the noisy action up at the top of the palm trees. Part of the year the palm fronds seem to be inhabited mostly by vitelline masked weavers. Even when they are not around their distinctive nests from the year before are obvious. 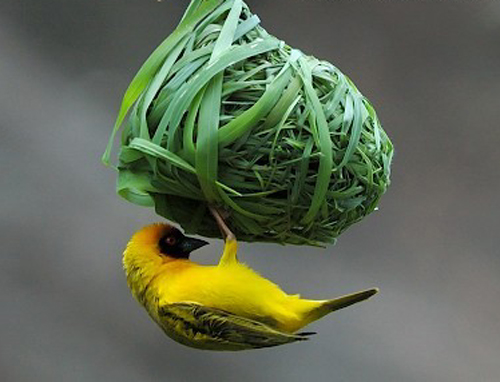 When we are working on the islands, usually March-May, the weavers are rather scarce and instead, their place in the palm trees seems to be taken up with the large island fruit bat, Eidolon helvum. These large bats are common on the African mainland where they are migratory; the São Tomé populations are thought to be the same species but do not migrate. They are eaten by many local people. 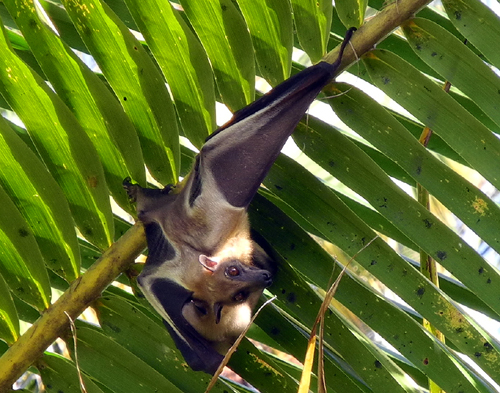 An hour or so at the Omali pool at the right time of year is enough to learn that Eidolon is a very noisy animal as well. They seem to argue and fuss all day when they should be sleeping; the sight of the entire group flying off to feed at dusk is unforgettable. 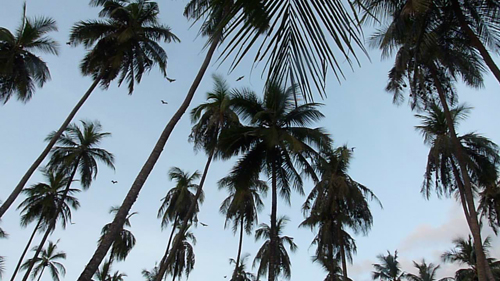 Bats are a group much in need of genetic study. There are a number of endemic species recognized by anatomical characters, but in most cases their true species status has not been tested molecularly as we have done with the Sao Tome shrew (see earlier blogs). The expert on the bats of these islands is my colleague Dr. Javier Juste of the Doñana Institute in Seville, Spain. In an earlier blog I reported that Dr. Juste was involved in the description of a new pipistrelle bat from Prìncipe – this is not yet published and is based in part on genetics. During the past few weeks, I have sent Javier some images of bats we have taken during past expeditions, and he has kindly tried to identify them for us. 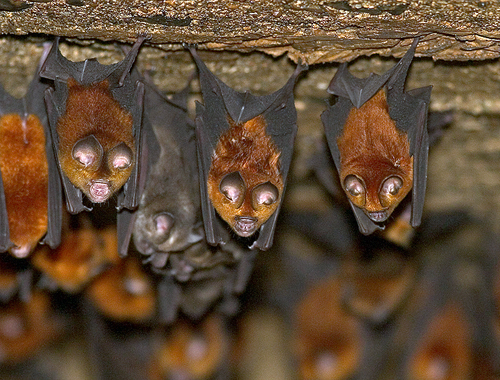 This is a group of bats we found at the old plantation of Nova Cuba, on Prìncipe. Currently recognized as Hipposideros ruber guineensis, they are thought to be a race of the red bat common on São Tomé but it would not surprise me if further analysis might prove them to be a distinct species. 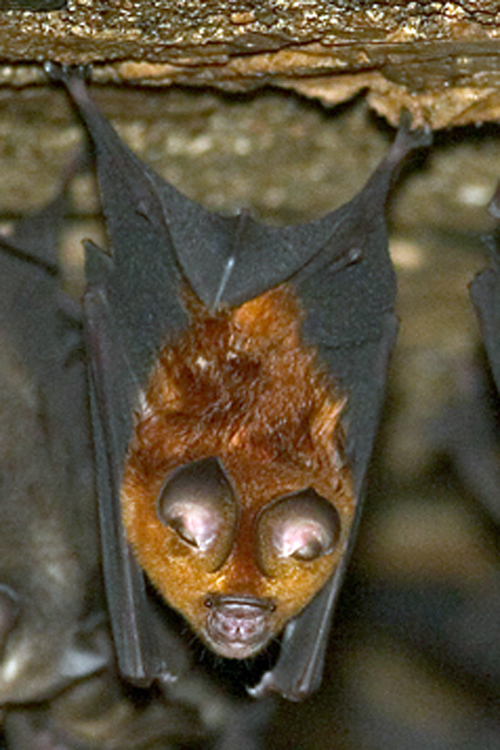 The photo below was taken by Wes during the day, on the ridge above Lagoa Amelia at about 1400 meters on São Tomé. Javier thinks it might be the endemic Hipposideros thomensis. 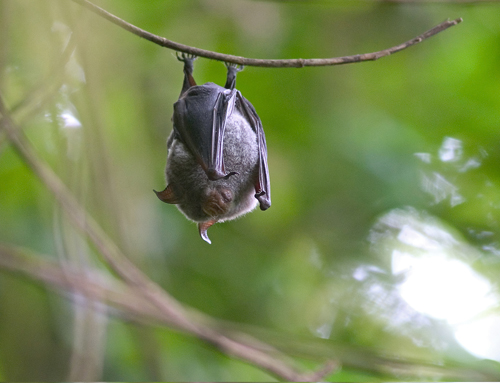 A final note on spiders; two previous blogs this year have dealt with spiders we have found in gardens, one of which turned out to be an endemic species. A few days ago, my colleague Angus Gascoigne of the Instituto Superior Politecnico sent me several photos of the spider below: 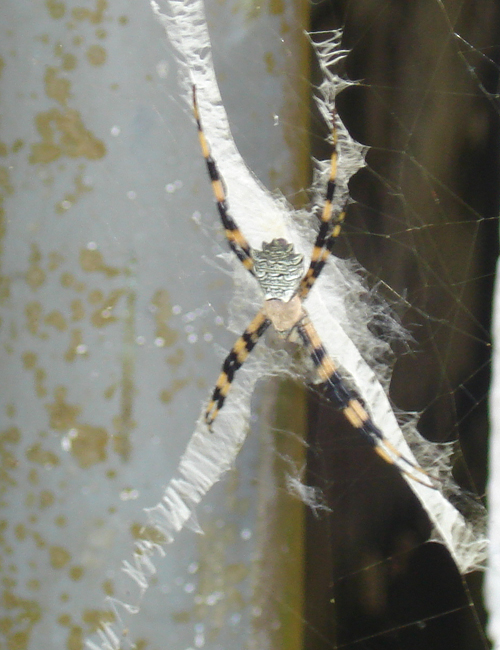 I took the photos in to our spider experts and they got quite excited. It is an orb weaver of a widespread genus but “this one is really different!” I suppose I should not be surprised, and Angus is collecting more as I write.

For all of you who observe them, Happy Holidays! 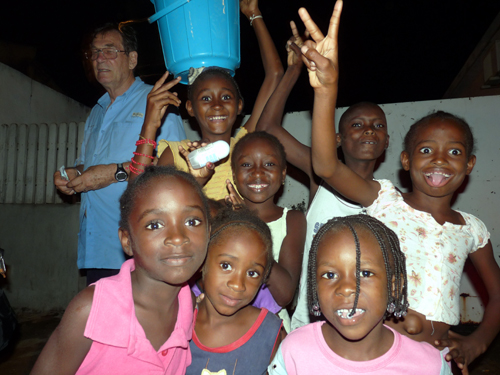