May 18, 2011
Gulf of Guinea Expeditions
by Robert Drewes

We have been back from GG V for a week or so now, and Velma and I are still trying to sift through the happy kaleidoscope of our experiences. Our photographer Andrew Stanbridge went on to further adventure with my kids in Ethiopia, so I suspect it will take him longer to decompress!

GG V was different; in over 40 years of fieldwork, this was the only expedition I have led in which I did very little science – mostly outreach and lecturing which were of course our goals this time. But, you can take the boy out of science, but not the science…….. etc. So along with lecturing, distributing posters and meeting important citizens, we did manage to do a little science. 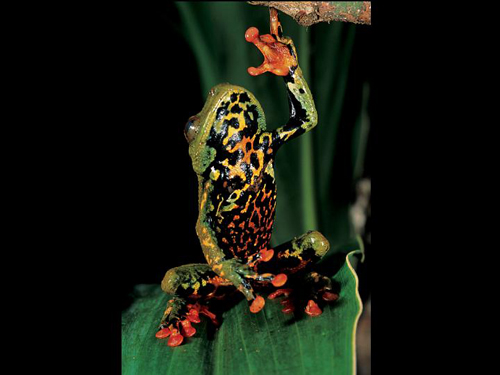 Readers of this blog (Glorious Ghost…. May, 2008) will already know about the endemic Sao Tome giant tree frog that breeds in holes in trees in the higher elevations of Sao Tome Island. Although we have not collected any since 2006, on every expedition I always check one particular tree to make sure its holes are still in use by the frogs. And I keep the location of the tree a secret, as I would hate to see these wonderful critters in the pet trade. This Olea is the only tree we have found with holes low enough to give easy access to the breeding holes. 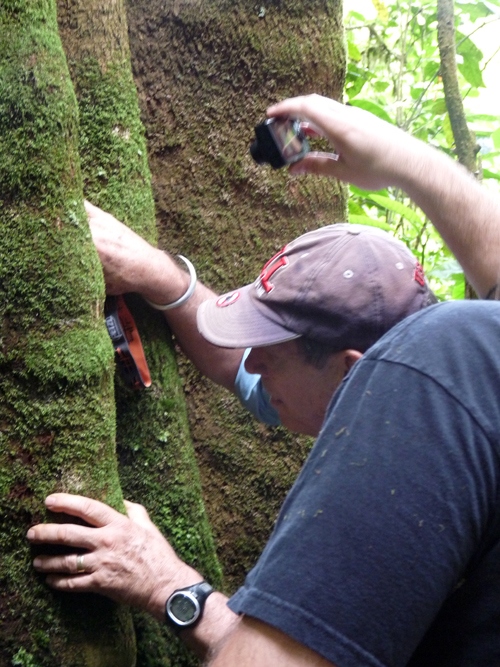 This time we found no adults but obvious signs that the frogs still use them. 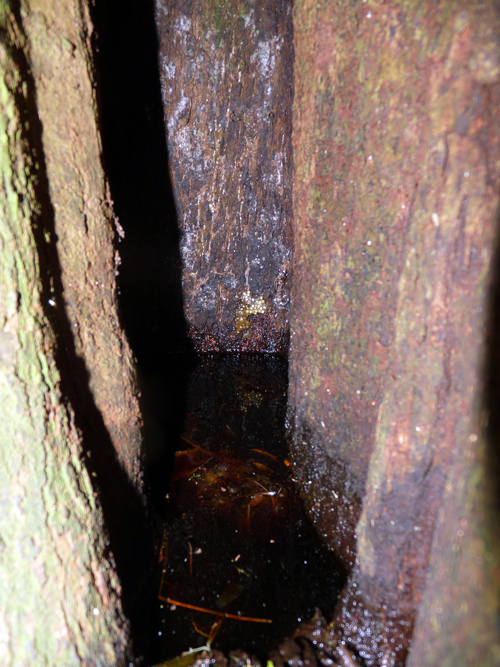 An egg mass was present in one of the holes testifying to the fact that the frogs are still around. I have no idea of population levels as these frogs appear largely to be canopy dwellers, but I doubt they are rare as they can be heard at night calling from high up in the trees.

On the eastern side of the island, our jumping off point for high elevation work like this has always been Bom Sucesso, where the main Trinidade road ends. This combination Park Obo Headquarters, meeting place, tourist destination and overnight facility for hikers and scientists at about 1000m is about as high as you can go by vehicle, and it is also a charming Botanical Garden. Until recently it has also functioned as the National Herbarium, curated by Faustino de Oliviera. Much of our duplicate Academy plant specimens are housed there complete with data labels. 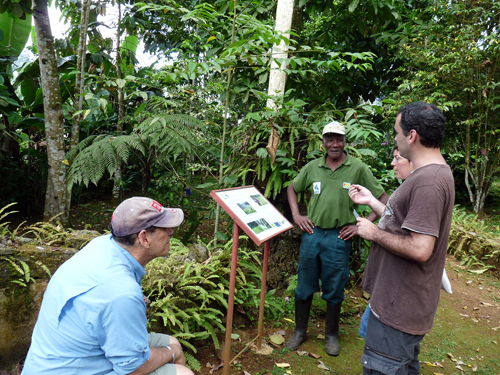 During GG V, we were saddened to learn that the various projects that have supported Bom Sucesso have been exhausted and except for a few guides waiting for tourists, no one seems to be maintaining the botanical garden and the herbarium-- they are rapidly falling into disrepair. 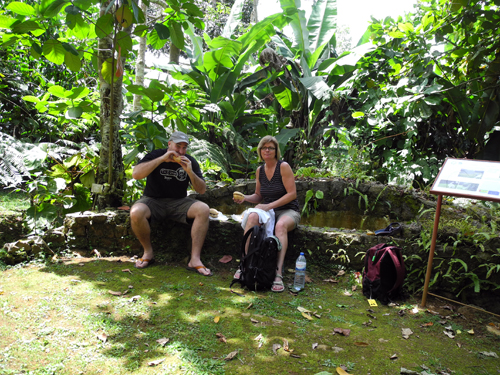 This is particularly tragic in that it is the National Herbarium, and I have always felt strongly that African countries should share in the biological discoveries made in their territories. Moreover it is frequently visited tourists attraction. Regrettably, there is no minimal, base-line government support to keep such entities going. My guess is that it would  take only two salaries to survive the lean periods between projects: one for a full-time gardener and one for the Herbarium Curator.

Down the mountain at about 800m and not far from the waterfalls of Sao Nicolau is the lovely home of my friend, Henrique Pinto da Costa. 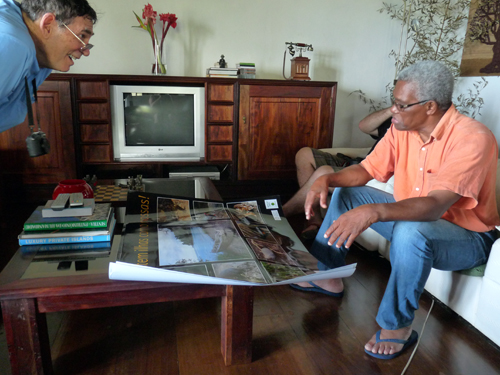 Henrique is the former Minister of Agriculture and one of our most valuable friends; I have learned much about the history and people of Sao Tome and Principe from him, and he has appeared in earlier blogs.

On our first GG V visit to Henrique’s he gave us a tour of his gardens which are extensive and impressive. 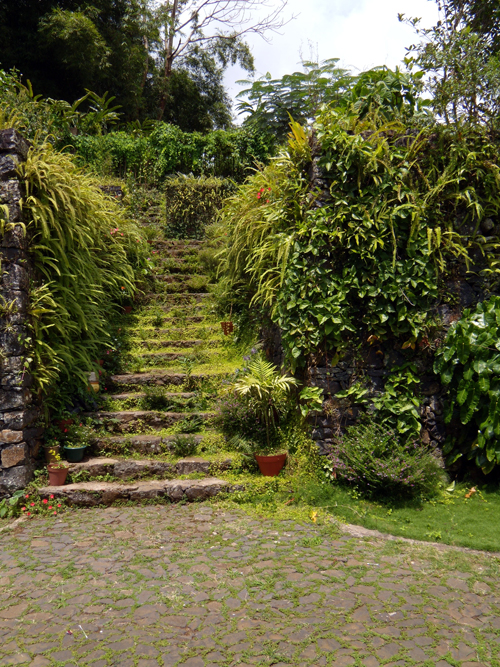 As we were walking through, Velma called my attention to a rather amazing-spider, among Henrique’s plants, and I recognized it as a Gasteracantha. This is a spider I am familiar with from my early days in East Africa. 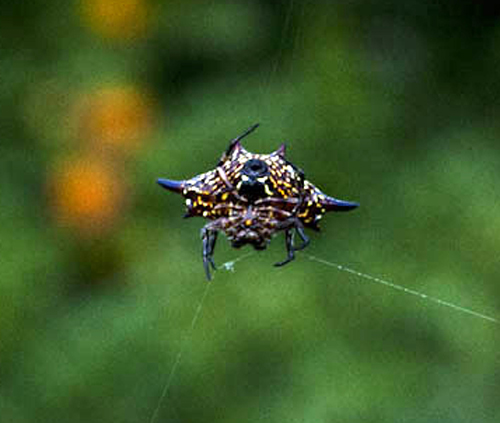 Gasteracantha is an orb weaver, although it does not look like one. They are solitary and weave a flat, disc-shaped web, but also have strange lateral spine-like projections from the body. On GG I, back in 2001, we had two arachnologists with us and made a large collection. This collection has yet to be analyzed but having been with both spider people, I could not remember ever collecting this genus on the islands. 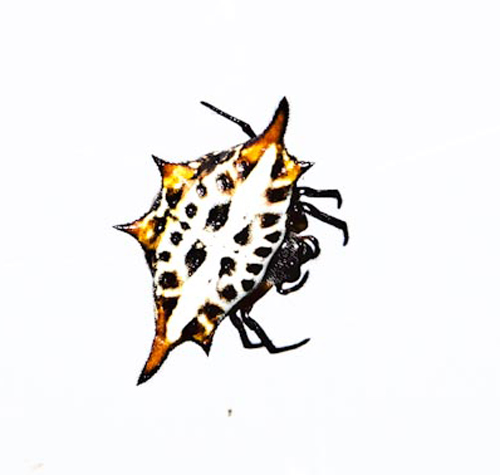 We did not touch the spiders, but when we returned to our base in Sao Tome, I emailed Dr. Charles Griswold, my colleague, one of the world’s experts on spiders and the lead arachnologist on GGI. I informed him that I could not recall ever collecting members of this genus on our earlier trips to the islands, and should I collect some. 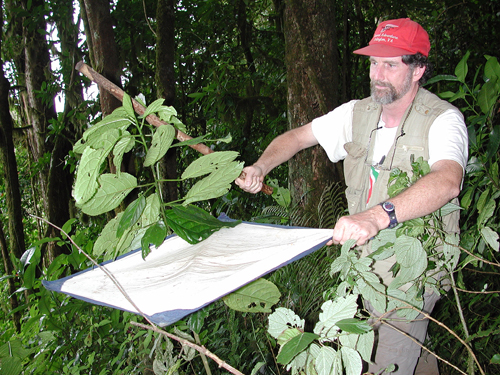 Charles response: Get ‘em!The parting shot of our 22 April blog is of my long-time friend and island field companion, Quintino Quade Cabral, collecting spiders in Henrique’s garden. We got a fine series of Gasteracantha and also some of a different, non-spiny species that appears to be somewhat colonial. The specimens are in our spider lab awaiting identification. A preliminary ID suggests they may be something called the Blood-red spiny spider, G. sanguinolenta. This has an enormous range so it well might be. On the other hand, a closer look at Sao Tome and Principe specimens frequently brings surprises.

More when our photographer, Andrew returns. My next Summer Systematics Intern, Elizabeth Miller, will be working on the genetics of Greef’s giant gecko, supposedly the same critter on both islands…. but time will tell. 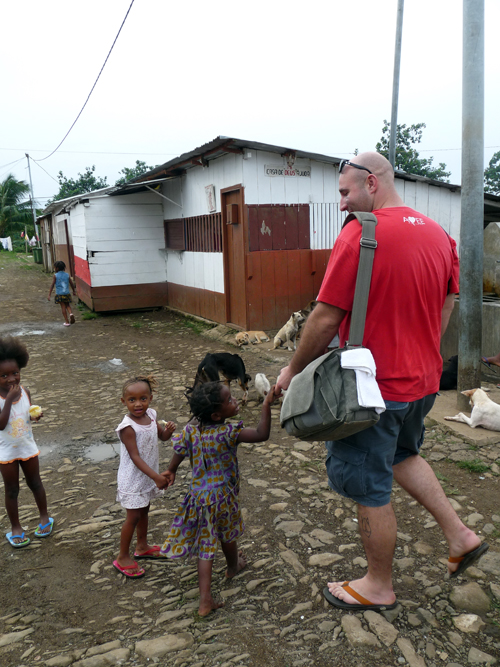