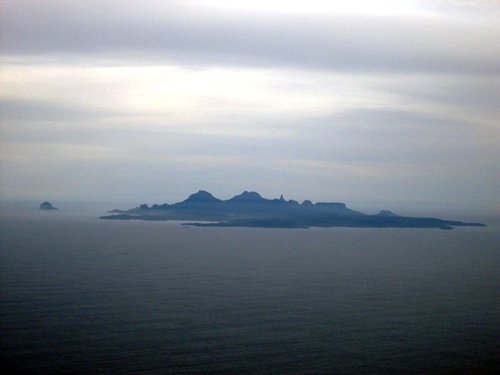 Principe Island from the northeast.  This island is at least 31 million years old  [Phot. Eddie Herbst]

Some years ago the Gulf of Guinea Project “morphed” from a pure multidisciplinary research focus to include an additional and parallel effort to share our science with the local people and non-scientists everywhere. My first couple of visits to São Tomé and Príncipe followed over thirty years of fieldwork on the African mainland, essentially doing science that is read and used by other scientists; this had been wonderfully exciting, rewarding and fun (sometimes scary). But my exposure to the islands of São Tomé and Príncipe changed my outlook and to some degree, the direction of my work in a fundamental way.

Here is a tiny two-island nation absolutely unique and rich biologically, yet still poorly known to the world of science. At the same time there is a looming threat to the environment with the recent discovery of off-shore oil, and the real danger that the world might lose this biological richness before it is even discovered and described! Moreover, the delightful citizens of these islands have, by and large, no idea how rich and special their biodiversity heritage is. Perhaps if we could make the citizens aware of what they have that is unique, found nowhere else in the world, they might be in a better position to make informed decisions as change occurs in the future.

Here, I realized, is an opportunity to help an entire nation prepare for change through awareness of the unique nature of their environment. But how? 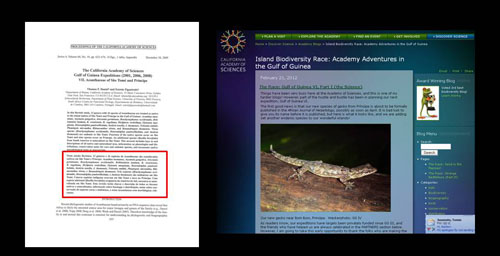 The sharing of knowledge is fundamental to my discipline, and I have always brought or sent copies of our published scientific results to the governments and appropriate institutions of the African countries in which I have worked, but it was not until several years into our islands work that it occurred to me that we should be including a Portuguese abstract in each of our publications (above left). The abstracts at least make our work understandable to Portuguese scholars who read scientific journals, but on the islands, it was only the various ministries and specialists who even received these articles, and they are technical in nature (we have published 18 so far). In 2008, I began to write this monthly blog (above right). While it is written for a popular audience and hopefully helps bring world attention to the biological uniqueness of the islands, it is still only available to English speakers with access to the worldwide web. 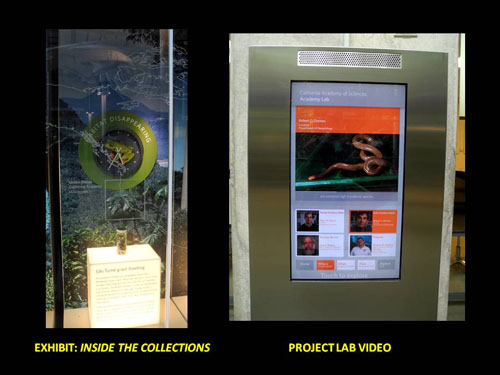 I should mention that the Academy is nearly 160 years old, and we receive over one and a half million visitors per year. We have frequent after-hour public and fundraising events, and whenever possible we have a Gulf of Guinea Islands display which give those of us who are involved an opportunity to describe our research to our public in person. 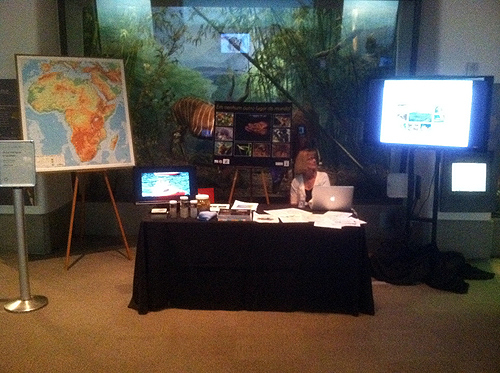 While these events help make our local visitors aware of our island work, they obviously have only indirect impact to our island friends.

During expeditions in the past few years we have been interviewed by local media (radio and television) and have been asked to give lectures on biodiversity at a number of schools and institutions, especially at the Instituto Superior Politecnico, thanks to Dra. Alizira Rodriguez, and also at a biodiversity conference under the auspices of Regional President Tosé Cassandra of Príncipe. 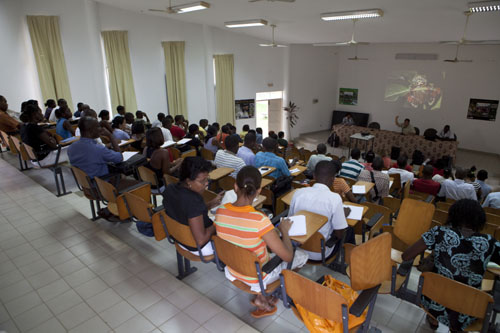 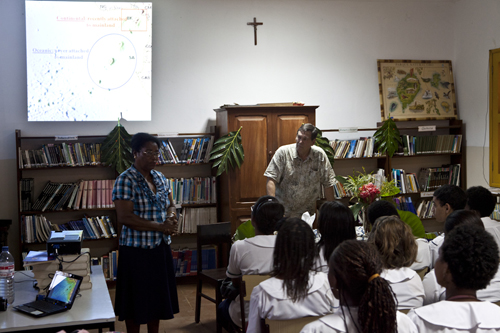 These have been excellent opportunities to communicate directly to advanced students and conservation workers (through a translator), but the information still does not get down to the fishermen, the kids, or the people in the market places.

Sometime in 2010, before GG IV, it occurred to me that we might be able to reach the local populations visually. One of the things we have that nobody else has is outstanding images, not just of pretty beaches and Câo Grande, but of the unique living plants and animals themselves! And we know what they are, and sometimes where they came from. So, I put together a series of powerpoint mockups of colorful biodiversity posters on my laptop, and during GG IV Ishowed them to everyone who would look; they all seemed to like the colorful montages. 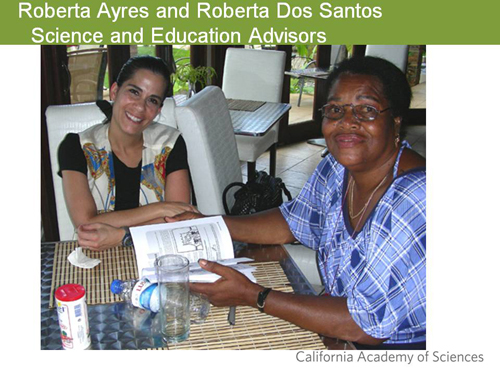 During GG IV, one of the expedition members was Roberta Ayres, MSc., an Academy educator who runs our nature center (see earlier blogs). Roberta’s mission was to assess the level of knowledge of biodiversity in the islands’ school system, assess the likely impact of the posters, and to discover what else we might do to raise biodiversity awareness through the schools. I have written a number of blogs about how the posters were ultimately produced, thanks largely to the efforts of Velma Schnoll, Docent Coordinator and Jim Boyer of our CAS Docent Council (see below) and with funding from STeP UP. 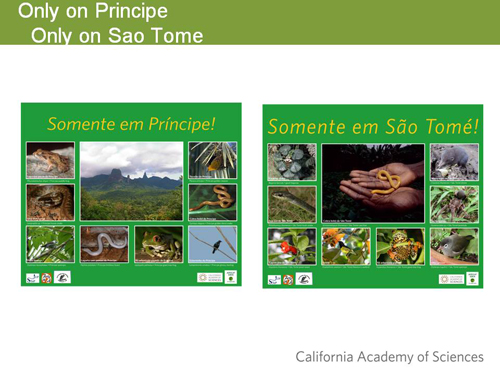 Gulf of Guinea Expedition V was a largely educational mission dedicated to the distribution on both islands (see earlier blogs) of the 200 posters we produced, and this was accomplished by Mrs Schnoll, Andrew Stanbridge (our photographer), and I, along with a host of local friends, including Marnie Saidi of Príncipe and Antonio Fernando of São Tomé. A very central figure in all of our endeavors, both scientific and educational since the very first expedition in 2001 has been Quintino Quade of STeP UP. Readers will know that he appears in virtually every blog since the first one. 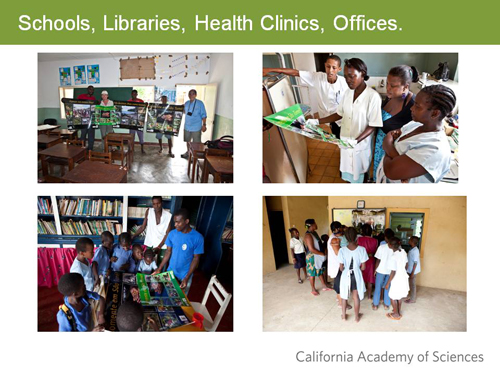 At the same, we continued to pursue information on our ultimate goal which is the creation of a Gulf of Guinea Biodiversity Center, a place on the islands where the citizens can access all of the information being gathered about the environment, and which can serve as a clearing house for all science and natural history research on the islands. Over the years, we have shared this idea with many citizens and foreign researchers on São Tomé and Príncipe.

In Part I of this blog, I described the scientific goals of GG VI (which begins next month) and introduced the investigators who will be on the expedition. The education component (Part II) is meant to build upon the efforts of GG V, and two educators will be coming along as well: Roberta Ayres (GG IV) and Velma Schnoll (GG V).

Like the overall project, our biodiversity education efforts have morphed into a team with Mrs. Velma Schnoll as Biodiversity Education Project Manager. After much debate (including the possibility of an animated cartoon), the team decided to produce 2,000 coloring books for young elementary school students, featuring the same endemic species that appear on the posters of last year. We have selected four primary schools on São Tomé and, of course, the one in Santo Antonio, Príncipe as our trial sites. 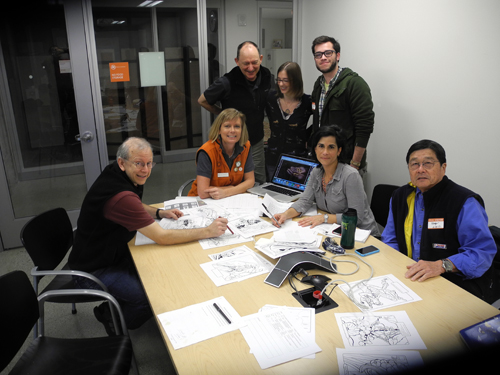 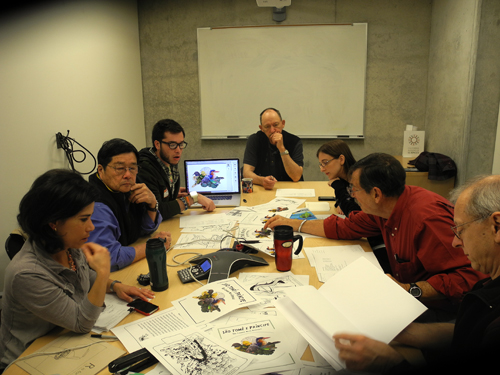 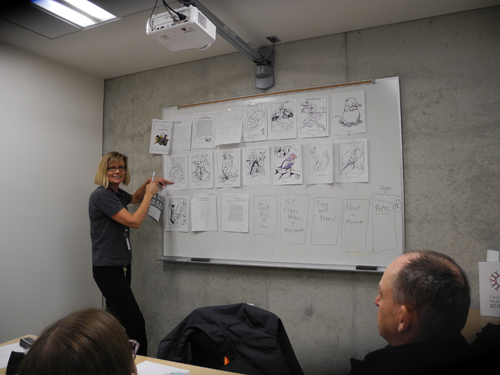 The coloring books are being printed as I write; 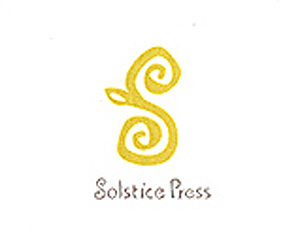 Thanks to Mike Murakami’s friend, Richard Engle, proprietor of Solstice Press, Oakland California, we got a very favorable discount on the printing costs. So, here is what they will look like: 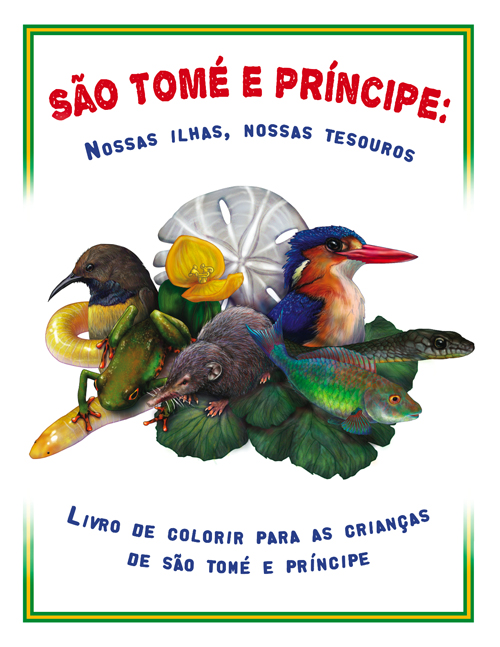 The front cover artwork is by Sean Vidal-Edgerton. Sean and Corlis Schneider (back cover art) were both in a biological illustration program at the University of California at Santa Cruz, and California State University, Monterey Bay. In 2011, this group produced a wonderful on-line account of our São Tomé and Príncipe biodiversity research: http://sciencenotes.ucsc.edu/2011/pages/eden/eden.html We were extremely fortunate that they joined us. 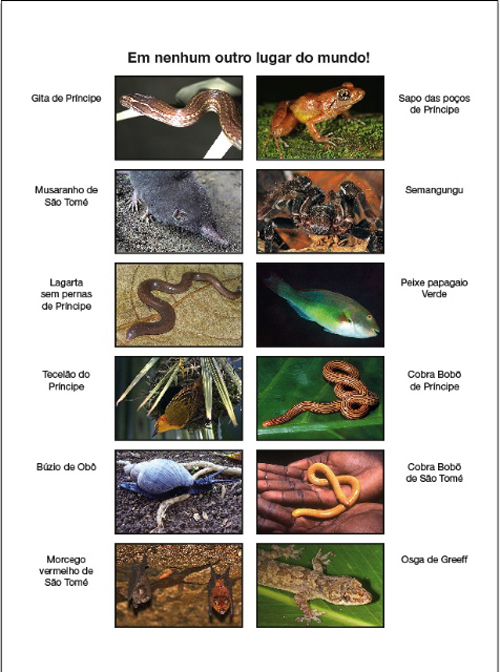 The inside back and front covers have color images of the same living plants and animals that are illustrated in the cartoons. 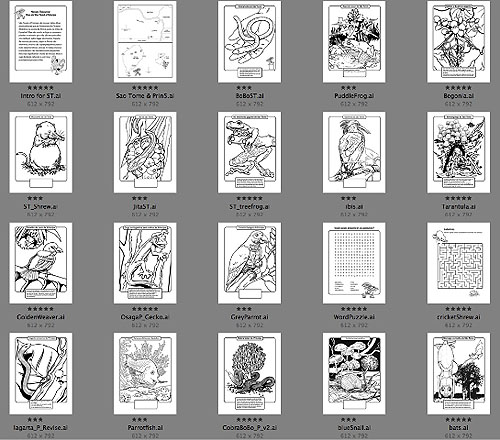 This is a spread of the full contents of the book; except for the first two pages, the cartoons will not necessarily be in this order. The two game pages will be in the middle of the book.

Here are a couple of Jim Boyer’s fabulous cartoons as they will appear as full pages: 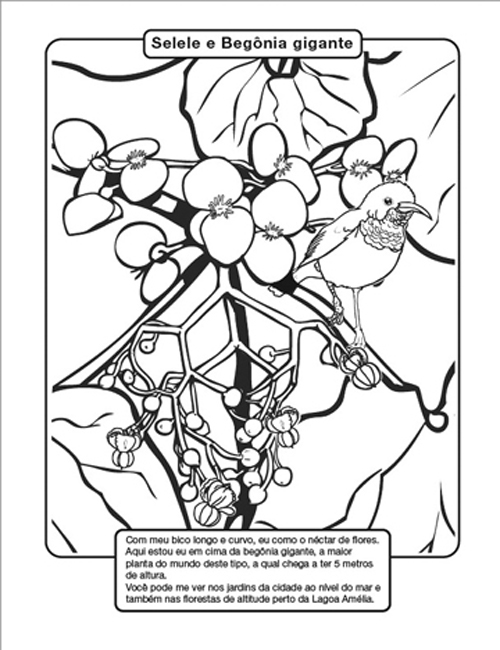 The Giant Begonia and Newton’s sunbird, both endemic to Sao Tome. 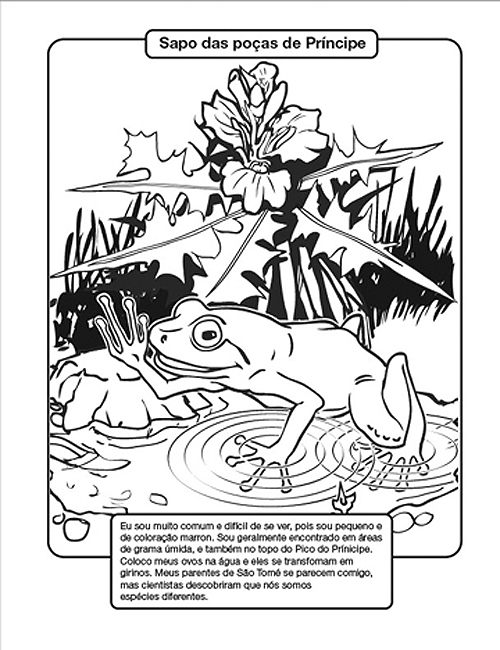 The Principe puddle frog found only on that island. 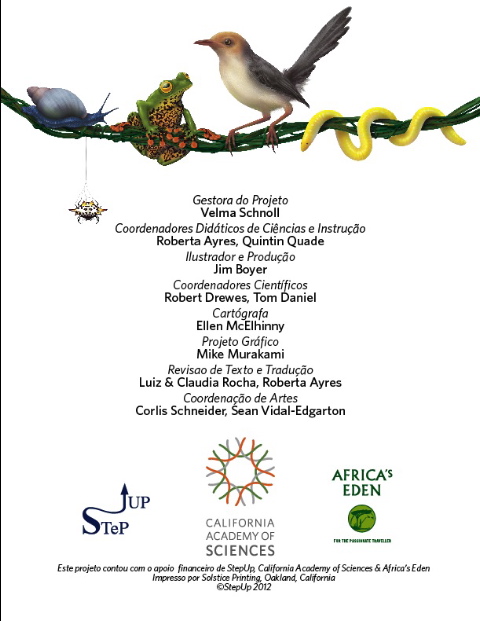 Again, the back cover artwork is by the talented artist, Corlis Schneider. As the logos indicate, much of the production costs of this project have been provided by a Goldman Fund donation to STeP UP, one of our main partners on the islands. Africa’s Eden is already well known to readers of this blog; the rest of us are volunteers.

So, Part II of Gulf of Guinea Islands Expedition VI is the distribution of the coloring books. Moreover, Roberta Ayres and Velma Schnoll have produced a teacher’s guide incorporating both the books and the posters with island evolutionary principles, and they hope to conduct a workshop for teachers in São Tomé and later on Príncipe.

Now, all we have to do is get 2,000 of these books to the islands by hand, and somehow procure enough colored pencils (crayons do not work well on the Equator) over there for the kids. 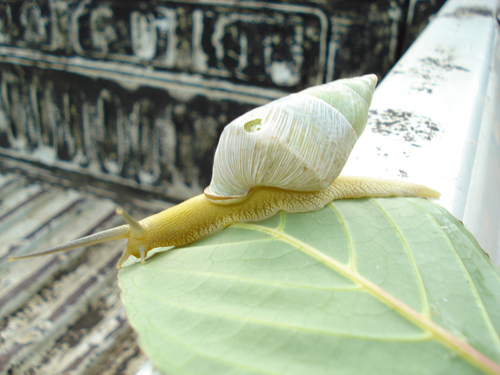 Atopochlis exerata, one of the many unique snails on the islands. Photo by M Morais, courtesy of A. Gascoigne]