Having completed my lectures at CIBIO near Porto, and in the symposium on Sao Tome and Principe in Lisbon, I hooked up with Drs Tomio Iwamoto, Brian Simison, and James Shevock, Miko Nadel and our outstanding photographer, Andrew Stanbridge in the Lisbon airport whereupon we paid gobs of money in overweight charges to TAP airlines (coloring books). The first six of us arrived at the Omali and have been working in various sites for a week until we were joined by Rayna Bell on the Friday morning flight. Rayna is the Cornell grad student who is looking at some interesting genetic problems with the treefrogs here. Early on I paid visits to Arlindo Carvalho, Director General of the Ministry of the Environment and Victor Bonfim, Director of Conservation to pay our respects and request our authorizations.

All of the photos below are by Andrew Stanbridge. 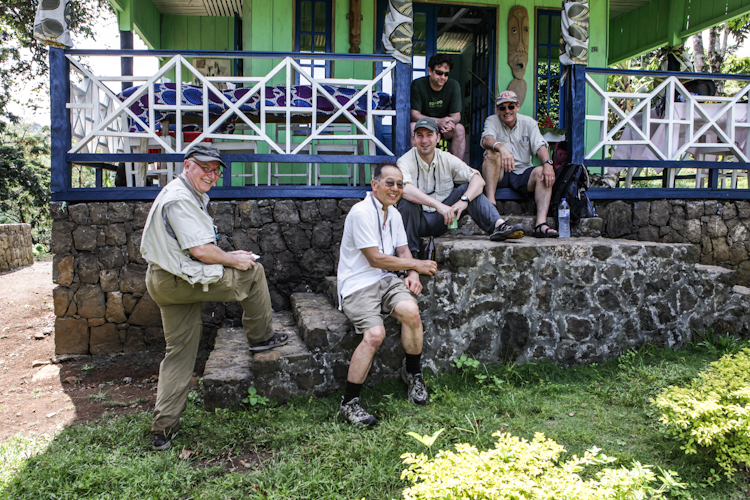 The first six of us; lunch at Angolares, southeast Sao Tome

So far, we have found no limpets! Small barnacles, yes; marine mollusks, yes; but no true limpets. Brian is pretty much sampling everything but his specialty critters do not seem to be here. Whether or not there is some chemical feature of the volcanic rock that renders the rocks uninhabitable remains a question. Perhaps Principe will be different. 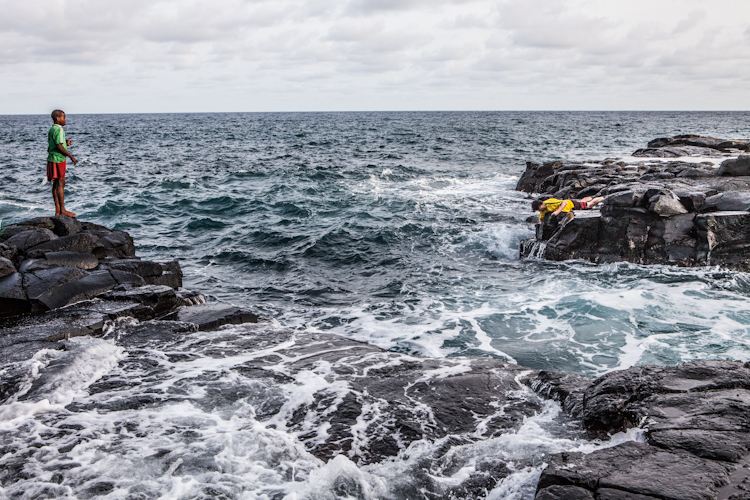 Jim Shevock has already found two bryophyte families new to the islands, both on the Macambrara road at about 1100 meters. This is Jim’s second trip; in GG IV, he made some 800 collections, so this is stuff we missed. 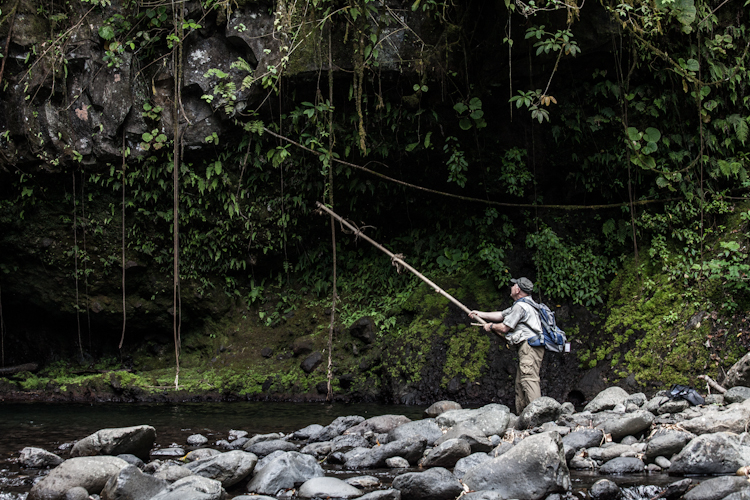 Jim reaching for hanging bryophytes on the Rio Abade

Miko Nadel, our grad student from San Francisco State, is conducting what we think is the first lichen survey ever of these oceanic islands- so everything is kind of new. 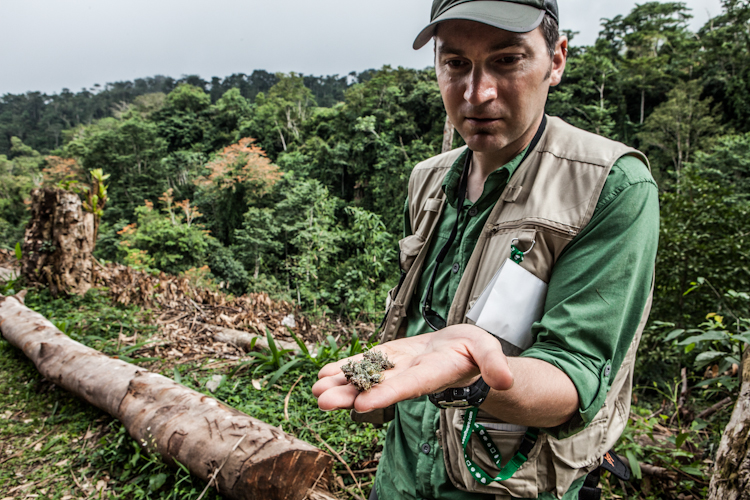 Miko with captured lichen; on the road to Sao Nicolau.

Tomio Iwamoto, veteran of GG I and II is working closely with the Department of Fisheries and an NGO called MARAPA to produce a guide primarily for the local fishermen. 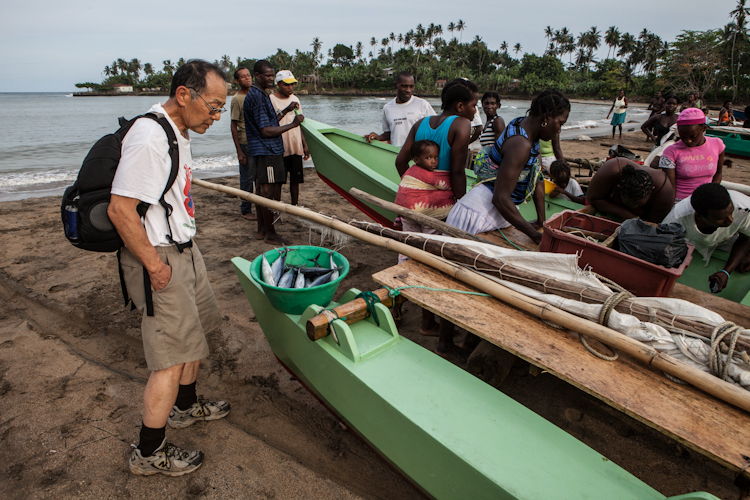 Yesterday, after Rayna’s arrival, we went up to inspect the large Olea tree which is our one locality for the unique Hyperolius thomensis. Like last year, we found no adults but there were old egg masses in both tree holes, and definitely tadpoles in one of them. The rains are upon us, and we are hoping that during the next couple of weeks the other smaller green species will appear. We are being assisted by old friends and a new one, a young Portuguese graduate named Joao Pedro Pio who works with Mariana Carvalho on the endemic maroon pigeon. I think Rayna and I, Pedro and a local guy from Nova Moca will go up at night to Lagoa Amelia (nearly 1500 meters) to try to collect Hyperolius molleri. 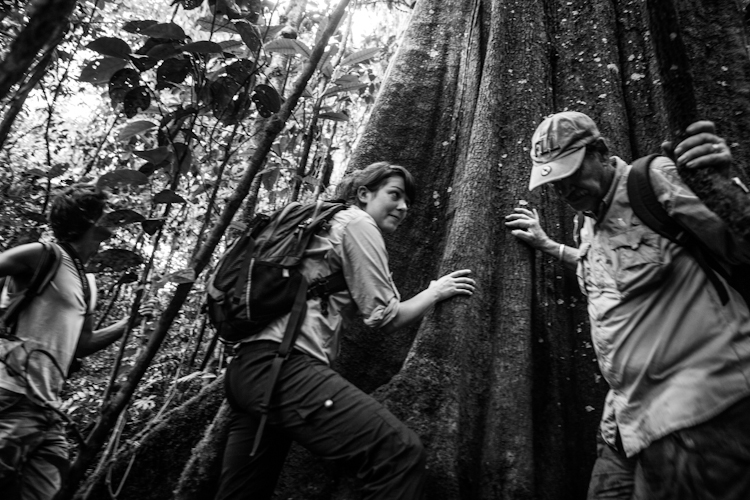 Andrew Stanbridge continues to take brilliant pictures. He is much more of an asset to us than just his fabulous shots. 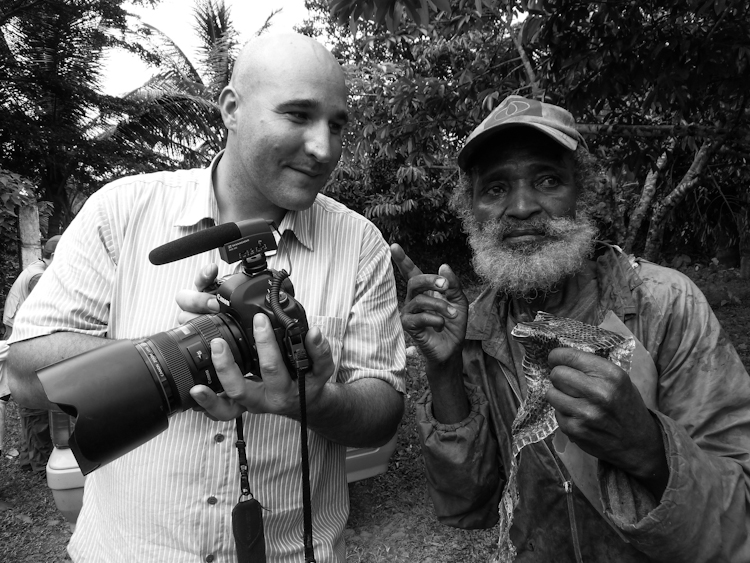 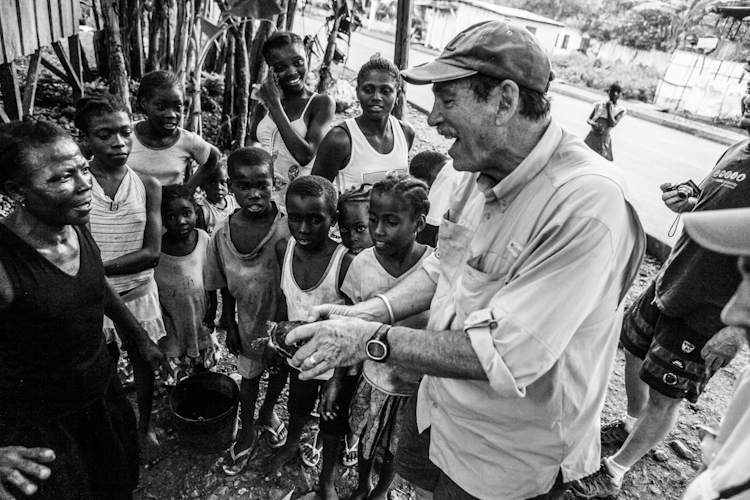 Me, bargaining for a side-necked turtle (Pelusios castaneus) at Ribeira Afonso

Tuesday, the two botanists and Andrew will go up to the top of the Pico, an area we have never collected. We are being taken there by our friends from Tropic Ventures, Andre, Hugo and Maneh. At the same time, Rayna and I will go out to Rolas Island to look for caecilians. They were collected on the island many years ago and we wish to add them to our genetic map of this unique species. 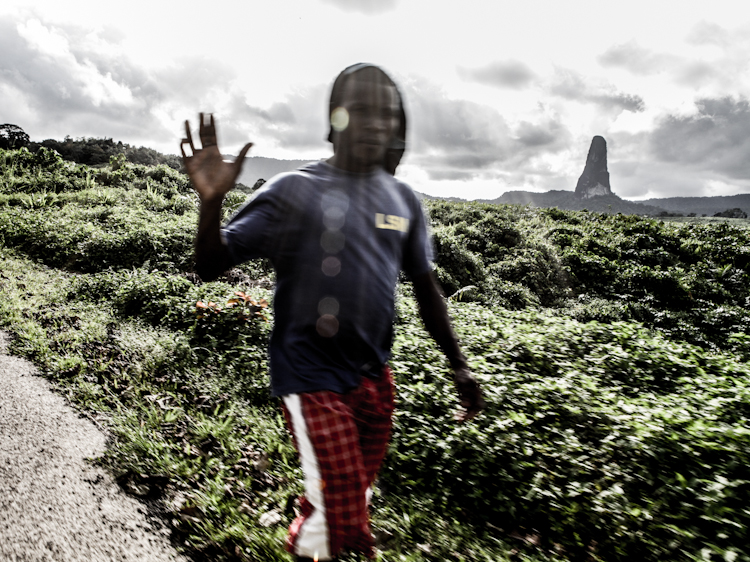 Imagine thousands of hectares of oil palm between this boy and Cao Grande. It is happening.