The Race: GG VII Potpourri and the World's Largest Reptile

Much has happened since my last post from the islands a couple of months ago which accounts for the tardiness of this one. However, Rayna Bell, our Cornell PhD candidate did manage to post two videos via National Geographic while we were on the islands.

I was invited to speak in TEDxSão Tomé, a great honor, and so returned in mid-June.  Readers should know that there is but one TAP flight to the islands per week via Lisbon so this is no small undertaking especially for a single lecture.  TEDx was a wonderful experience, and I was able to meet with some the brightest young people from the islands and to “spread the biodiversity word” internationally as well. 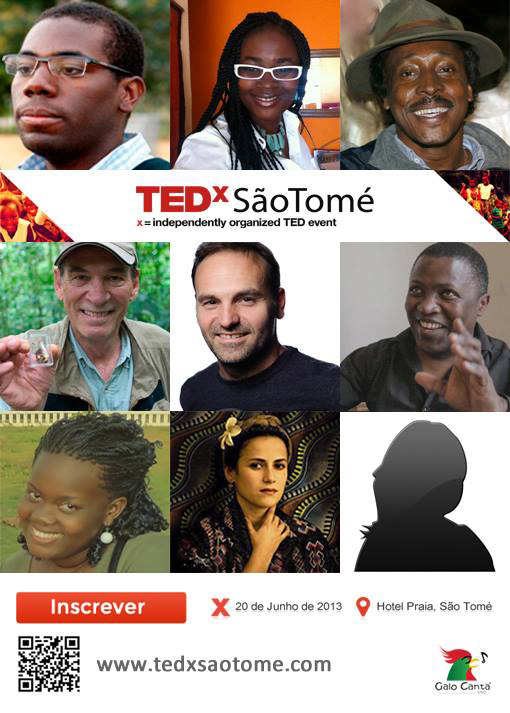 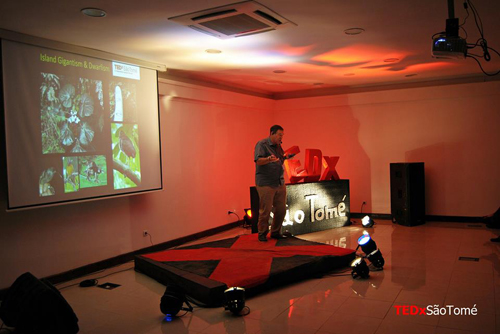 In the meantime, back at the Academy, we have been assessing the results of our fieldwork on GG VII; below is an image of the 2013 team, along with some of our best local friends. 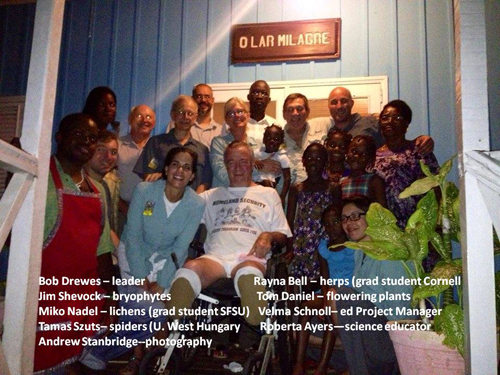 The tall Sao Tomean in the back row, and the woman on the far right are Quintino Quade and Roberta dos Santos, respectively; the gentleman in the wheelchair is Ned Seligman. All three work for an NGO called STeP UP which has interacted closely with our CAS teams since the very beginning, especially with our biodiversity education efforts. 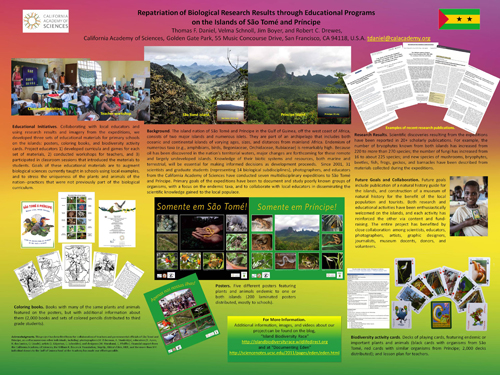 Shortly after returning, I learned from two colleagues here at CAS, entomologists Dr. Paco Hita Garcia and Georg Fischer, that they had described a new ant species from Sao Tome back in 2010, but somehow forgotten to tell me! The members of GG I collected these along the trail from Bom Successo and Lagoa Amelia  over 12 years ago! 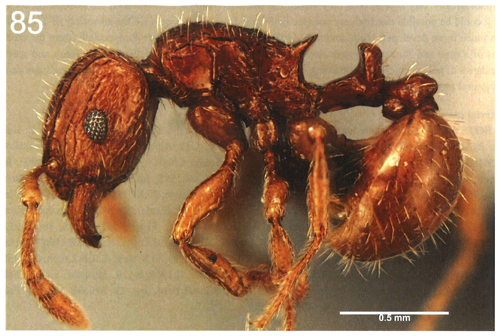 Miko Nadel, our lichenologist, has narrowed the focus of his MA dissertation to the fruticose lichens of the genus Usnea which are found at higher elevations on the islands. He ascended Pico Príncipe, and readers will recall that he was part of the team that ascended Pico do São Tomé during GG VI.  He now has over 600 collections upon which to base the first survey of this group in the islands. 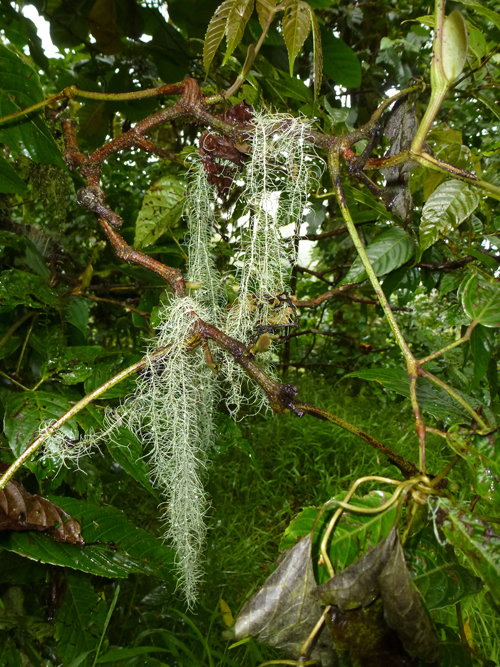 Miko’s major advisor at San Francisco State University is Dr. Dennis Desjardin, a world authority on mushrooms and veteran of GG II and III. The blog of a year ago (April: Mountains that Glow) featured Miko’s discovery of tiny glowing mushrooms on Pico Sao Tome and later, glowing mycelium (threadlike plant body of fungi) covering steep hillsides at around 1100 meters. This year our photographer, Andrew Stanbridge, returned to Macambrara, the second locality, and discovered larger whole mushrooms that glow, not just the vegetative bodies. The two images below are of the same unidentified mushrooms in daylight and at night. 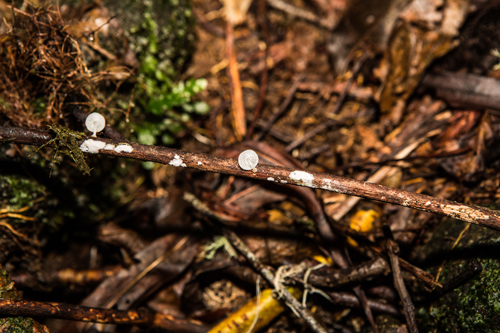 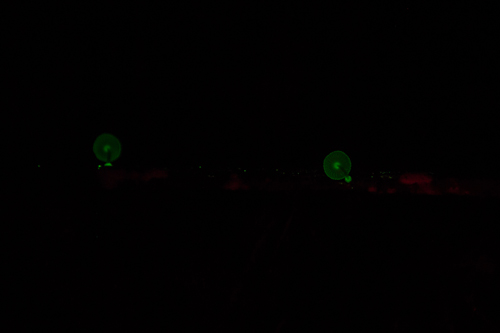 Rayna Bell reports from Cornell: we have very strong evidence now that the two species [São Tomé giant treefrog and Oceanic treefrog] are hybridizing [on São Tomé] (individuals of intermediate size/color and lots of molecular data to back that up), and now the question is whether they have always exchanged migrants and still diverged in body size, coloration, and breeding site (divergence with geneflow) or if they were isolated in the past and have recently come back in to contact (allopatric speciation). Just as exciting is that Rayna has discovered that the Oceanic tree frog, Hyperolius molleri (right below), that has long been thought to occur on both islands, does not; i.e., although very similar to each other morphologically, the two island populations are very different genetically, contradicting earlier molecular work by one of my interns years ago! Rayna and one of her undergraduate students just published their GG VI findings of chytrid fungus on the Sao Tome Cobra bobo; this is only the second published incidence of the fungus on a caecilian species. 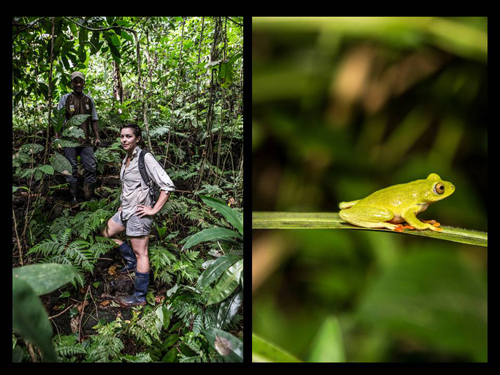 Dr. Tamas Szuts, our Hungarian spider expert, was able to make great collections of salticids (jumping spiders) and orb weavers (Araneidae). Tamas was particularly excited about his collections of the genus Pochyta (below), a problematic group within the family. 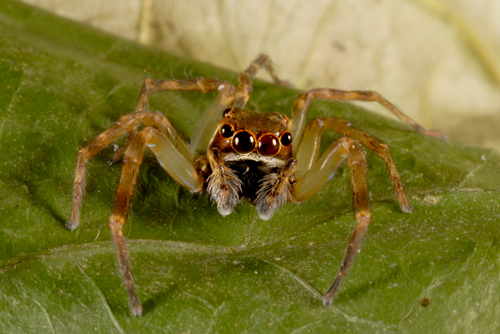 Many of Tamas’s specimens are still being identified, but he writes: I also made some interesting observations about their [Pochyta] life history: a specimen had camped on a leaf just above a Phallus muchroom which attracted some small flies. [The] specimen was observed to jump several times toward the flying or landing targets, and then climbing back onto the leaf with the aid of its dragline.
Tamas took the remarkable photos below. 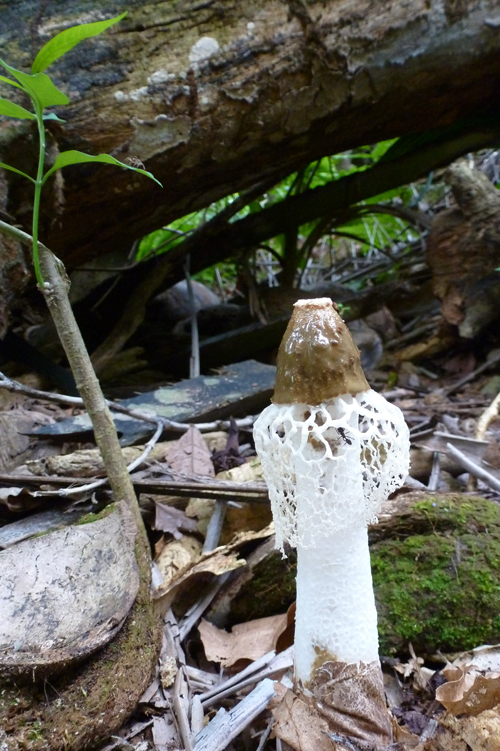 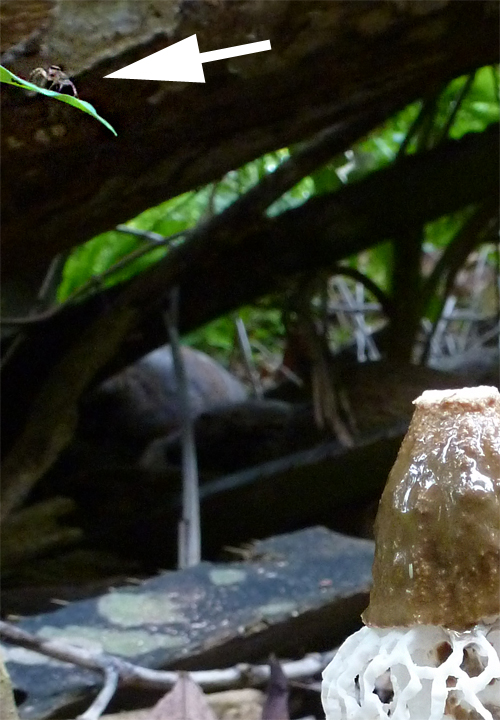 Finally, since we returned in May I have received several remarkable photographs of leatherback sea turtles, Dermochelys coriacea, one of four species that nest on the beaches of São Tomé and Príncipe. In terms of mass, this is the largest reptile in the world. The largest female on record was 915 kg (just under 1 ton, and close to 3 meters long (9.8 feet)! 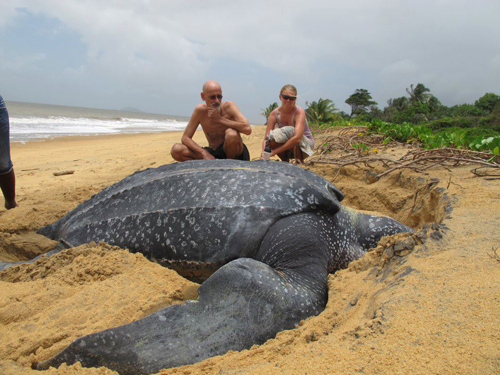 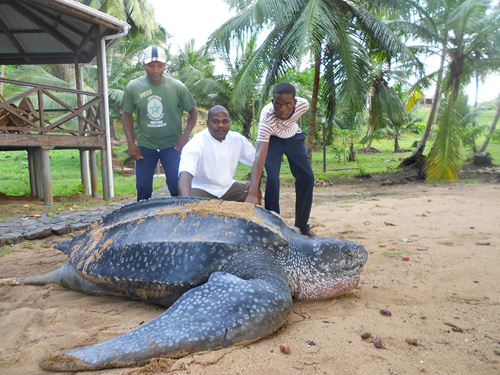 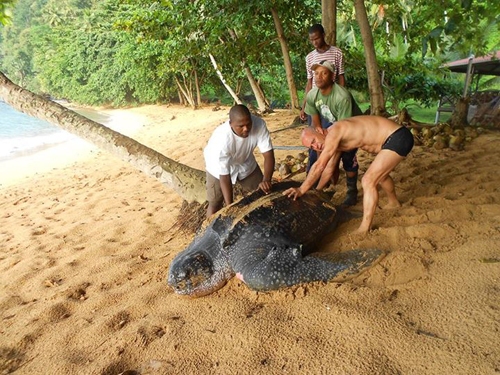 There is much, much more which I will report in late September. Until then, here’s the parting shot: 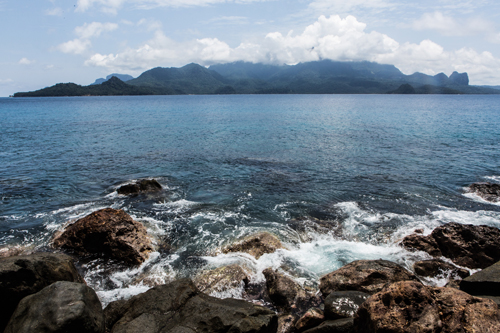 Southeast view of Príncipe Island from the Jockey’s Bonnet.  A. Stanbridge GG VII