The Race: Another New Species and Contributions from our Citizen Scientists.

Colleagues in London, Drs. Simaikis and Edgecombe of the Natural History Museum, have just published a paper on centipedes that includes some very old specimens from São Tomé and Príncipe collected as early as the 1930’s.  Among the material, they discovered a new. presumably endemic species. 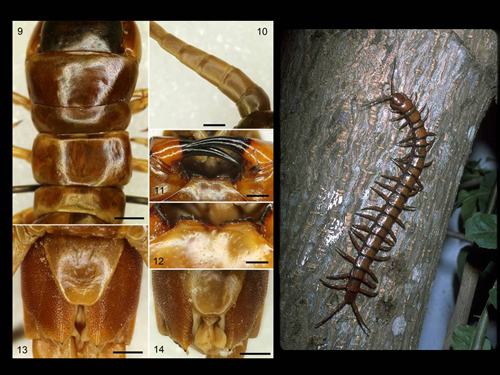 Meet Otostigmus coltellus (left), from Zootaxa 3734 (2013). For scientific purposes, only the parts of the animal that are important for identification are published; the photo on the right  (RCD phot - GG II) may or may not be an Otostigmus but it would look something like this.  I am told they are difficult to identify unless you look at underparts, but as all islanders know, these centopéias can deliver a painful, sometimes dangerous bite.  So far, the new O. coltellus is known only from Ilheu Rolas and Zampalma on São Tomé; it and O. productus are considered unique to the islands, while the two large reddish species of Scolopendra (see below) found on both islands are probably introduced. This means that the centipedes of São Tomé and Príncipe are 50% unique (endemic). 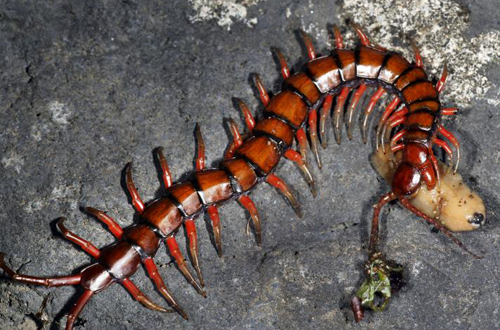 More and more islanders on São Tomé and Príncipe are posting images of strange island creatures on the internet. For instance, in my last blog I was able to include photos taken by the staff of Praia Inhame of the largest reptile in the world, the leatherback sea turtle. 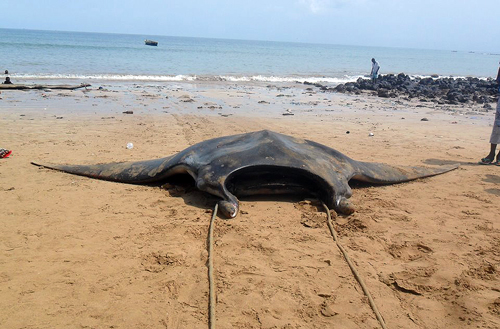 Another example is this huge manta ray which was caught off Praia San Paolo near the airport last year.  This could be one of six different manta species of the genus Mobula that occur in this part of the Atlantic.  In these cases, we do not know who took the pictures, but we can still respond with identifications.

Still others are sending us pictures of animals and plants directly for identification; we call these people “citizen scientists,” and we hope our continuing expeditions and education programs are having something to do with this. 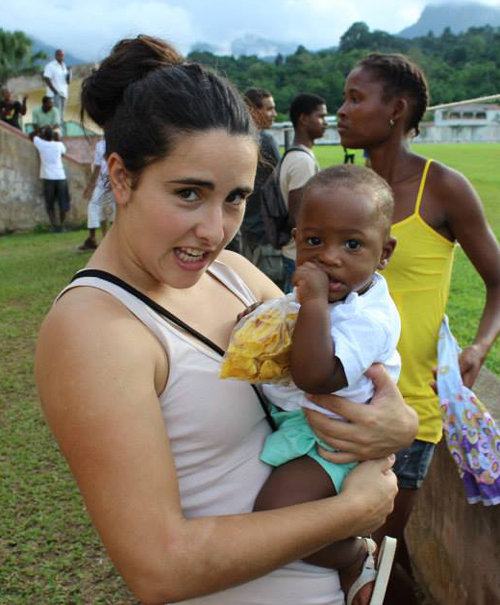 Estrela Matilde lives on Príncipe Island and works as Supervisor for HBD Agricultural Operations.  Recently a fisherman brought her the strange creature figured below: 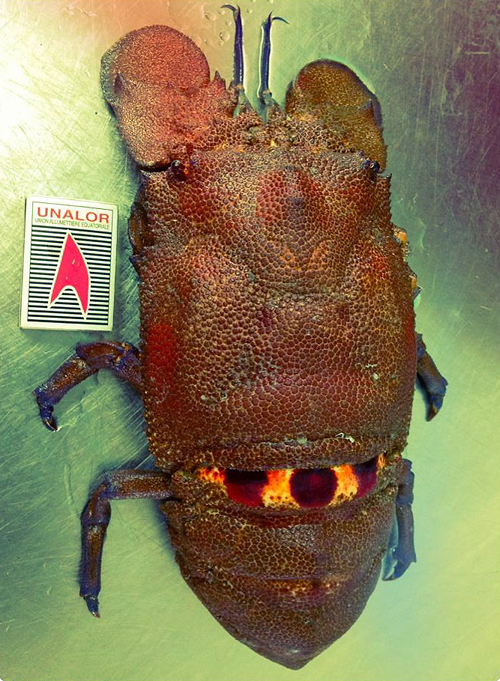 I took the photo to some of my colleagues at the Academy who identified it as a red slipper lobster, and we were able to send Estrela the information below. 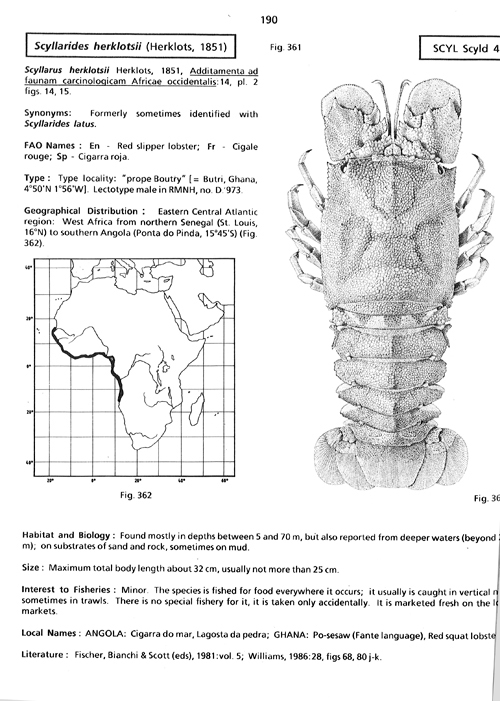 We have received some very interesting photos From São Tomé Island, over the past few years but most recently from Ponta Figo. 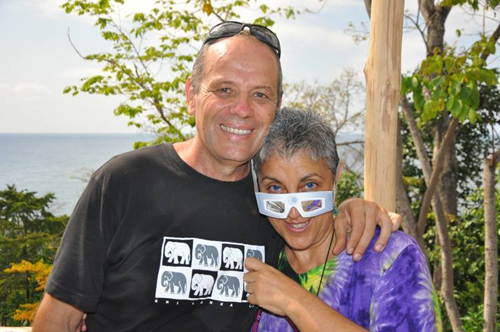 Tiziano Pisoni and Mariangela Reina are the proprietors of Mucumbli Ponta Figo, a restaurant/guest resort in the northwest of the big  island. Tiziano is evidently very fond of African civets (Civetticus civetta) and has had several as pets. One that now lives in the garden is 14 years old, but he has a new pup as well. 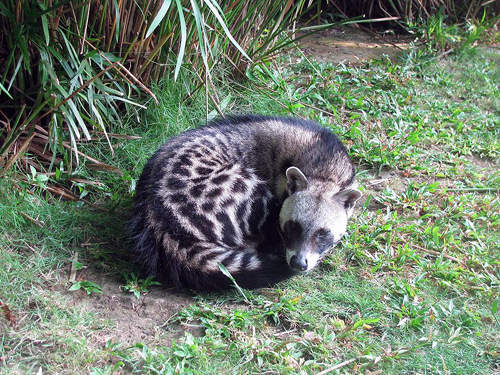 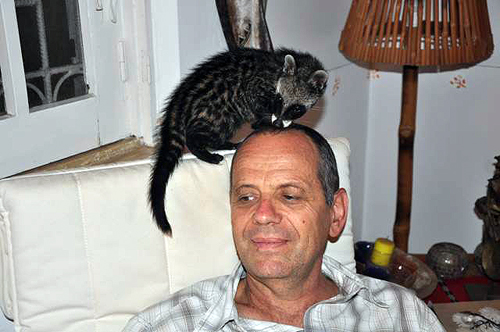 African civets are widespread on the African mainland (I have seen many). They are the largest members of the mongoose family, Viverridae, but are not native to the islands.  It is said they were introduced to control rodents about 100 years ago. They are largely nocturnal and eat virtually anything.

But the most intriguing photos the Mucumbli people sent me were of some mushrooms they found a month or so ago.

Readers will recall that before we began our expeditions, fewer than 15 species were known from São Tomé, and Príncipe had never been sampled.  We now have 225 species;, over 30% are apparently new to science.  I immediately sent the Mucumbli shots to Dr. Dennis Desjardin, an outstanding  mycologist and veteran of two Gulf of Guinea expeditions. 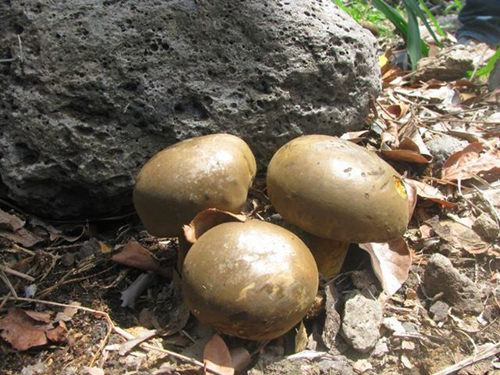 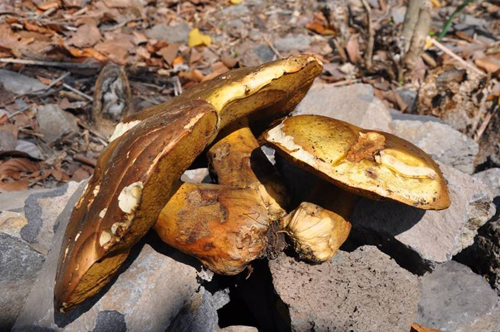 Dennis immediately identified the mushrooms as boletes, a rather general term largely referring to their shape.  He could not identify them without actually having them in hand but did say that we have never collected this species, and they may well be the first ectomycorrhizal fungus for São Tomé!  This term refers to the symbiotic association of the mycelium of a fungus with the roots of certain plants, such as conifers, beeches, or orchids; this relationship is found among a number of mushroom groups, and frequently the association is with particular species of plants or trees. We had already discovered two genera of ectomycorrhizal fungi on Principe (see below) but so far none confirmed from the big island. 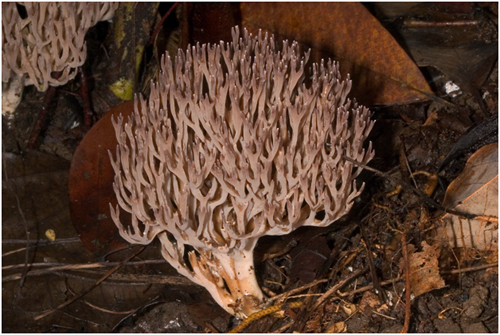 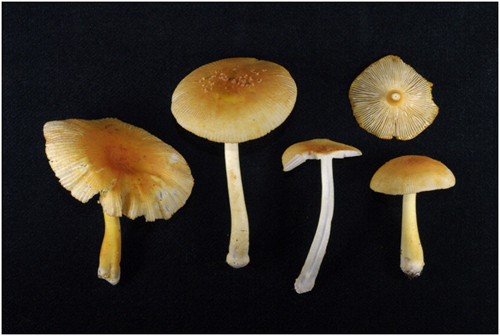 Clearly, we need to get some samples of the Ponta Figo mushrooms.

Back on Principe, Marnie Saidi of Santo Antonio is our champion citizen scientist so far. 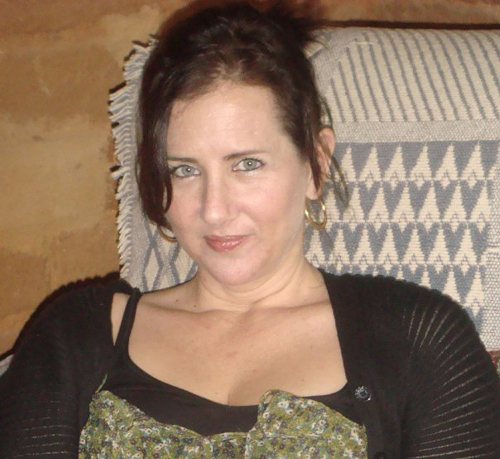 Marnie and her partner Hassan own and operate a construction business in Santo Antonio, Principe.  She has participated in a number of our biodiversity education projects in schools on the smaller island and has become quite the naturalist.
The garden behind her house is nothing special (see below) but the creatures that visit her every year are quite surprising. 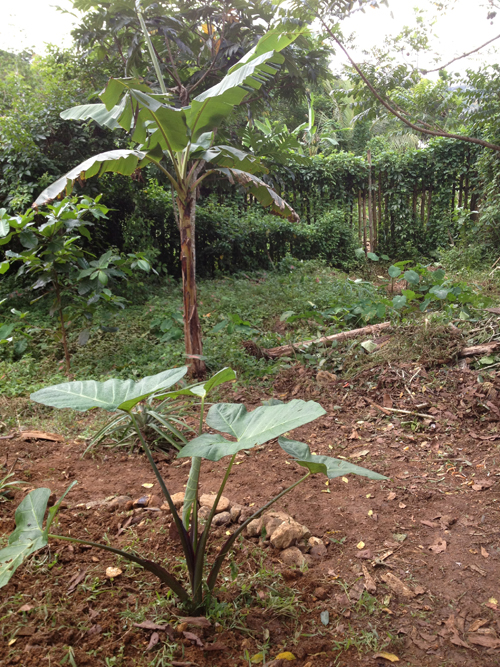 Last year, Marnie caught a number of large beetles on her property and actually put them in the freezer for me to await our return last April. They are still being identified, but the photo below is a long-horned beetle, of the Family Cerambycidae. Note Marnie’s green fingernails, offered as scale. 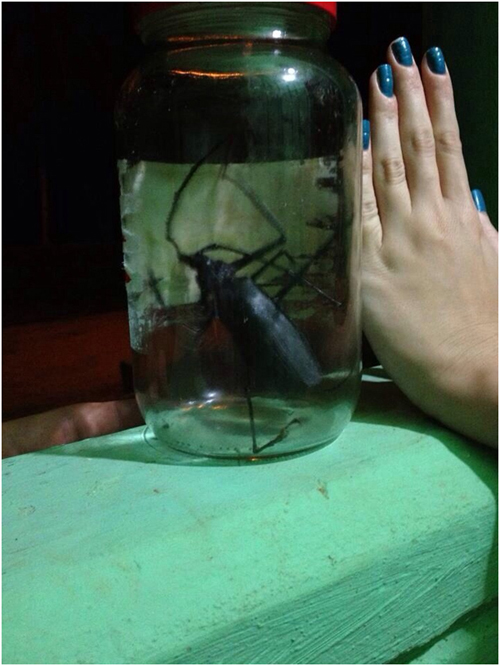 Below is an image from the internet to show what a long-horned beetle looks like when it is not in a jar-this is a much smaller individual. 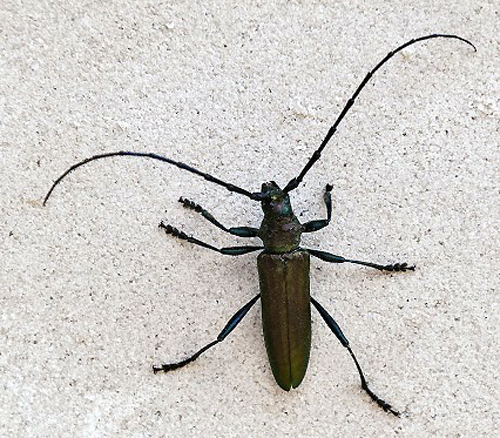 Marnie’s catches of long-horned beetles are particularly notable as so far as we know, 40% of the species of this group are found nowhere else but São Tomé and Príncipe.  Below is another of Marnie’s beetles, which we now have here at the Academy.  It has been tentatively identified by our entomologists as a dynastine scarab.

Since we returned, Marnie has sent us a number of intriguing images of her strange visitors. The next email was the photo below, actually I think it is two different images of the same spider.

Dr. Charles Griswold, one of my colleagues here at the Academy identified this as a giant crab spider, Heteropoda venatoria; these are widespread on the mainland and not unsuspected to be present on Príncipe.  They are frequently welcomed into homes, as they eat large numbers of insect pests. Marnie then sent a photo of a beautiful green moth. 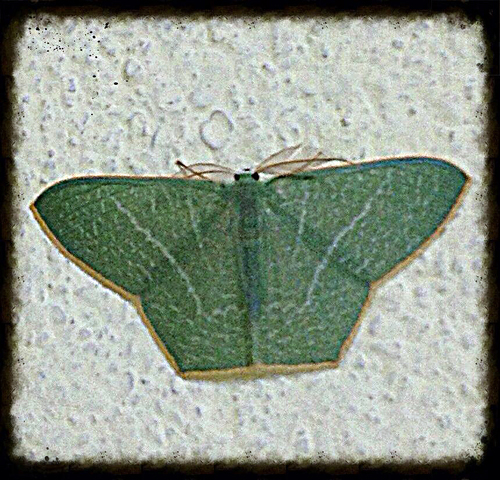 This was kindly identified by my friend Dr. Luis F. Mendes of the Institute for Tropical Science Research in Lisbon.  Although, he is a butterfly specialist who has just published a paper on the butterflies of the islands, he is sure that this green moth is a new record for Principe!

During the past few weeks, Marnie has been visited by two of the three unique frog species on the small island. 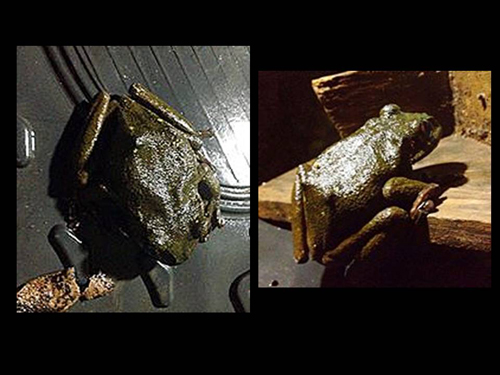 This is a male of the Principe giant treefrog, Leptopelis palmatus.  Photos of this species have appeared in this blog many times. The males can be many different colors, but the females are usually dull green; the eyes of both species are always bright red. According to the tenets of biogeography, there should be no frogs at all on the islands, as there has never been a connection with the mainland!  What is spectacular about this particular species is that the females are the largest of all African tree frogs (up to 110 mm)! It is the only island amphibian species whose tadpoles (aquatic larvae) we have never found and described. 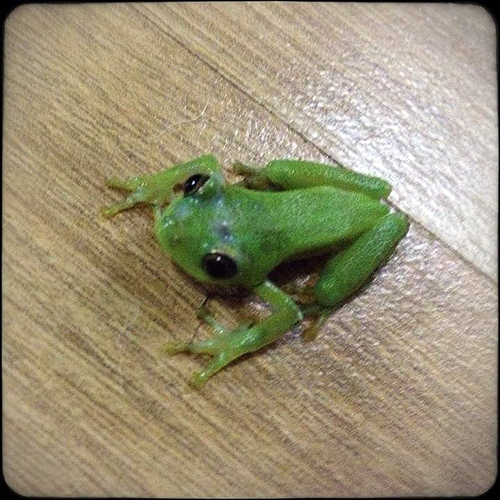 Marnie was most recently visited by an Oceanic tree frog, Hyperolius molleri. Until very recently, we thought this species was the only one that occurs on both São Tomé and Príncipe, but very recent evidence hints that the two populations may be different. We are working on it.

As you can see, observations by islanders, Citizen Scientists, are of great value to us and the world of science.  We are busy identifying  specimens and planning our next expeditions; perhaps a short educational one in the Spring, and another full-fledged one in early 2015. 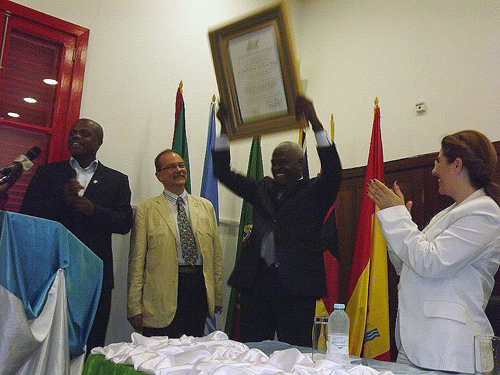