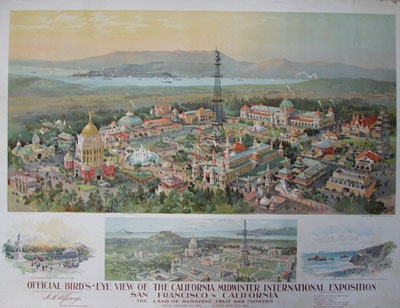 Hello, my name is Hadrian Quan and I am happy to announce that our exhibit of the California Midwinter Fair (1894) is finally up in the Library Reading Room. For the past few months I have gone through the various collection pieces of this aspect of our Exhibits and Expositions Collection. 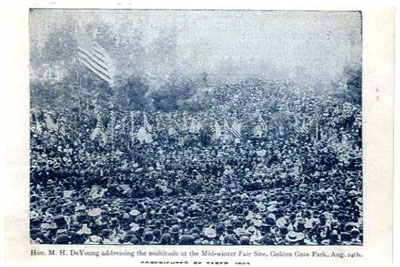 The fair was the work of M. H. de Young who sought to revitalize California’s depressed economy after the Panic of 1893.1 Hoping to follow the model of Chicago’s Columbian Exposition, de Young planned what would be the first fair of its kind in California.2
This collection was the generous donation of Donna Ewald Huggins in memory of Raymond H. Clary, a collector and historian. 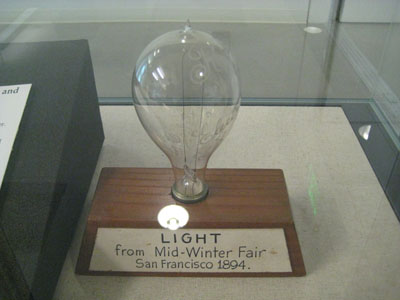 Taking over 200 acres of Golden Gate Park, it was centered in what is now the park’s Music Concourse.3 Right at its heart was the Electric Tower, rising 266 feet and displaying a spotlight shining a nearly 2.5 million candlepower beam of light. Built by Leopold Bonet, one of the designers of the Columbian Exposition, he built an iron and steel edifice resembling the Eiffel Tower.4 This was one of the most striking aspects of the tower-architecturally it was rather isolated in terms of its style. The other buildings and structures of the Fair competed to be the most exotic, representing Spanish Missions, Moorish Rotundas, and Oriental Minarets. 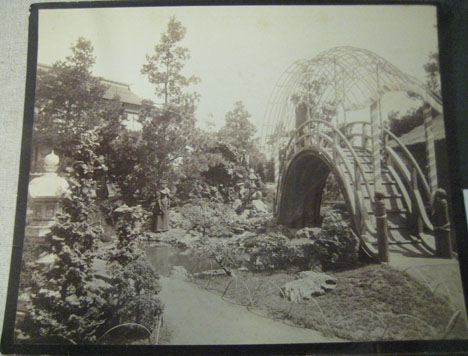 The Japanese Village was the fair’s most popular concession, was conceived and founded by Asian art importer George Marsh. Famous for selling vases, brocades, and curios, Marsh hired Japanese workers and imported Flora and Fauna to create authenticity for his gardens. After the fair ended, the gardens were maintained by Makoto Hagiwara, who had designed the bulk of the gardens for the fair. Hired and fired multiple times due to anti-Asian sentiments, but essential to the maintenance of the gardens Hagiwara left behind two gifts to the modern world-the Japanese Tea Garden itself which stands in Golden Gate Park today, and the Fortune Cookie which he invented as a treat to go along with Tea for his customers.5
The collection itself contains many ephemera including lithographs, coins, tickets, postcards, cups and a mustache spoon. We hope that you come to visit it soon.
Hadrian Quan, Careers in Science Intern
References
1Story of Golden Gate Park [illustrated]; Giffen, Guy and Helen; Press of Phillips and Van Orden Co.;  San Francisco; 1949
2Making of Golden Gate Park, The Early Years:1865-1906; Clary, Raymond H.; California Living Books; San Francisco; 1980
3Story of Golden Gate Park
4SF's First World's Fair; Smith, James R.; Guidelines (accessed 9/9/2011).
5Making of Golden Gate Park.