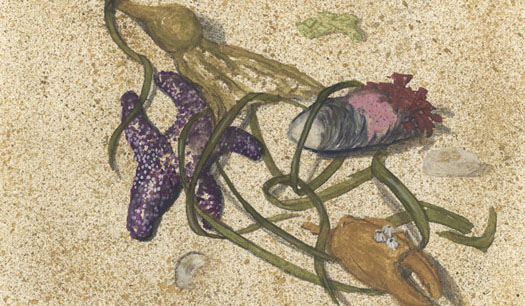 The Academy Archives is part of the Academy Library, and includes material on the history of the institution, including scientific expeditions and research, Museum exhibits, building history, and general administrative history. The Archives also houses manuscript collections from our scientists and scientists related to the Academy. Manuscript collections are mainly comprised of field notes, unpublished manuscripts, correspondence, scientific illustrations, and photographs.

And in THIS corner…

Diane T Sands: When not working as the Collection Development Librarian here at the Academy Library, I do freelance illustration. I have been an active member of the Guild of Natural Science Illustrators for the last 15 years. I have created illustrations (scientific and otherwise) for the North American Diatom Symposium, The Annals of the Entomological Society of America, The Hudson Institute, KQED’s Mind/Shift blog, The Farallones Marine Sanctuary Association, California Wild Magazine, and the education department here at the Academy, among others. Not surprisingly, my interest in the Academy Archives and Rare Book Collection is peaked whenever there are illustrations involved.***

What better way to get acquainted with the Archives and all the wonders it holds than to pit my illustration skills against it? Enter the Illustration Smackdown

The way the Illustration Smackdown works.
Each month, the archive staff, will locate an illustration in the Archives during the course of their regular work. They will not show it to me. Instead they will provide me with two pieces of information;
1. The scientific name of the plant or animal featured.
2. Whether the piece in question is a field sketch or a finished illustration
I will then have two weeks to research the species and produce my own illustration. Then we will feature the two illustrations side by side here on From the Stacks for your viewing pleasure.

*** Diane will be doing a live illustration demo during the Academy's Nightlife on Thursday, June 28, 2012