The Remora remora, or common suckerfish, is an odd pelagic marine fish usually found in warmer parts of most oceans. They can be found offshore from San Francisco south to Chile. Their front dorsal fin has evolved into a giant sucker disc that they use to hitch rides on faster swimming sharks, rays, sea turtles, bony fishes and even marine mammals. Once thought to be purely parasitic, the relationship to their "host" is now considered to be symbiotic.

Not eaten themselves, they have been used by fishermen who attach a line to the Remora's tail, letting it free to swim. The tethered Remora then attaches it's sucker disc to a larger fish as they are wont to do. At this point when it is noted that the Remora is accelerating,  the fisherman then reels it back in and captures the larger fish. 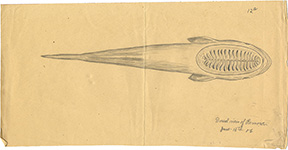 In 1905, the California Academy of Sciences sent 11 men off for a year and a day on an eighty-five foot schooner destined for the Galapagos Islands. While the expedition was underway, the California Academy of Sciences would fall into ruin during the great San Francisco earthquake of 1906. The specimens gathered during that expedition would come to form the crux of the new California Academy of Sciences’ collections. Of the young men on that voyage, entomologist Francis Xavier Williams kept field books (http://www.biodiversitylibrary.org/item/123606) and made drawings of all of much of the wild life he encountered. This illustration of the Remora remora was one of many fish Williams ran across in his exploration of the islands.