April is National Poetry Month here in the United States (and National Poetry Writing Month, hint hint...), and so we thought it time for another installment of "A Naturalist's Garden of Verses."  These four poems feature swaying owls, cloud-riding, and actual sea moss specimens mounted on the page.  Enjoy!

Were these the trees of a mimic isle,
Never at loss for the sun or dew?
Or only the branches that decked a while
A fairy boat with its fairy crew? 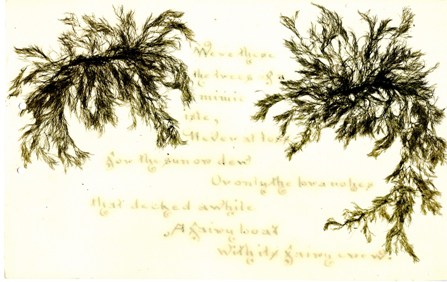 Verse from Sea Mosses, by James Thomas Field (1849), lettering by Grace A. Hall (1890 ca.) From the Grace A. Hall collection.
These tributes plundered from the sea
These many-colored variegated forms
Sail to our rougher shores and rise and fall,
To the deep music of the Atlantic wave.
Such spoils we capture where the rainbows drop
Melting in ocean. 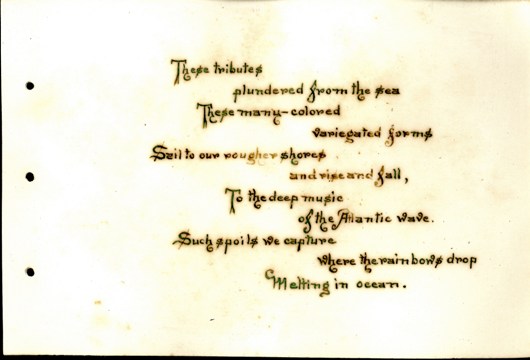 The Owl and the Stars, by Arthur L. Bolton (1930 ca.) From the Bolton Family collection.
The little Stars were playing in the sky,
When the Man-in-the-Moon came sailing by;
He winked at them and they winked at him,
And they winked at the Owl on the old dry limb.
They played hide-and-seek, for the night was still,
And the Moon slipped down behind the hill,
But the little Stars kept winking still
And nodding in a roguish way,
To see the Owl sit there and sway
Till the Sun came up, when all he could do,
Was to sit on that limb the whold [sic] day through. 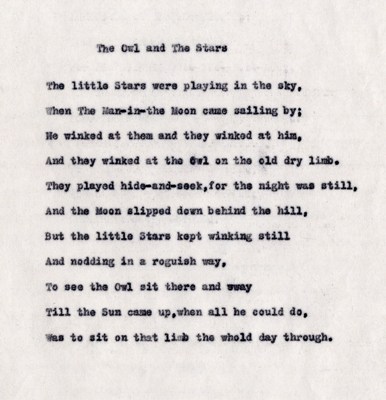 O would that the world before me lay
All visible to my roving eye
For... [unfinished -HY] 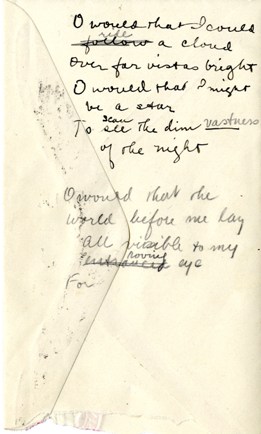