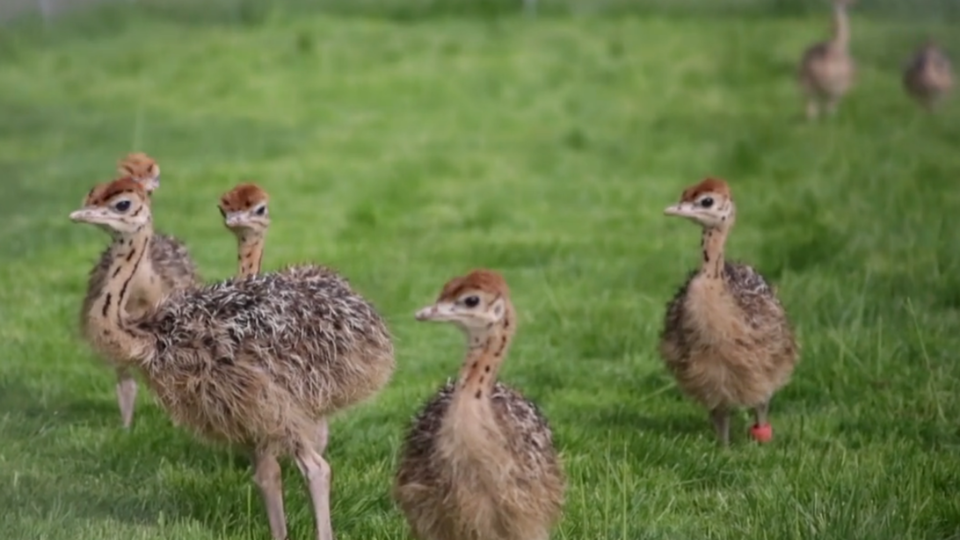 Behind the Scenes with Tim Steinmetz

It’s 5 pm on a cool, foggy evening in Golden Park. Tim Steinmetz, the Academy’s Ratites Program Coordinator, is on the public floor of the Earthquake exhibit, preparing the brood of ostrich chicks for one of their first thirty minutes of outdoor exercise in the West Garden.

Steinmetz, who previously served as the supervisor of the San Diego Zoo’s Avian Propagation Center, is the ostriches’ de facto Mr. Mom. He has done everything from setting up an incubation room in the Academy basement with eggs obtained from a Northern California ostrich breeding ranch to monitoring their growth, feeding them red clover and live crickets, and setting up an exercise schedule. See a video of how Steinmetz cares for the eggs here.

Not every egg comes from the same mother hen. Nor do they all arrive fertilized. And not every fertilized egg will develop successfully—it takes time to discover which ones will bear live chicks. There’s a six-week cycle for embryos to develop and hatch successfully from the shell.

Steinmetz divides his time between the live chicks on the public floor and incubation room in the Academy’s basement. For weeks, he has weighed and measured each egg, which look massive (about the size of a Peewee football) compared to common grocery store eggs from chickens. Next, Steinmetz uses a “Candler,” a machine that gently cradles the egg between two focused beams of light. When the interior of the porous shell is illuminated with a reddish-orange glow, it is possible to discern movement by the embryo, the viscous yolk sack, even its still-forming dark round eye. The eggs are returned to the incubator where it’s 97.6 degrees inside, with 25% humidity.

Chicks are active within 15 minutes of birth and it’s difficult to tell the males from the females without testing. (It becomes much easier once their feather colors darken and change within a year or two.) Twenty-four hours after hatching, Steinmetz takes the chicks upstairs to their new home as part of Earthquake: Life on a Dynamic Planet.

In the exhibit, they illustrate the impact of plate tectonics and seismology on the evolution of animal species. Ostriches belong to an order of flightless birds known as ratites (others include emus, rheas, and kiwis) all of which developed from a common ancestor on the ancient super landmass, Gondwana. These ratites evolved into separate species on the emerging continents of Africa, Australia, and South America.

At last the chicks—now a few weeks old, barely a foot tall, and completely fearless—are ready for their special outing.

“Listen,” Steinmetz grins as he unlocks the back door of the exhibit. He’s in a small entrance vestibule with rubber matting, a sink, and brooms. To his right is a sliding plywood door leading to a 6-foot by 14-foot enclosure where the ostriches sleep at night when they are not on public display. A loud, sweet, chirping like a high-pitched whistle or trill fills the room. “When left alone, they’ll sing,” he explains in his own Texas drawl. “When someone enters, they only stop because they’re such curious creatures.” True enough, the chicks storm towards him, examining his outstretched hand with tiny nibbles and the focused intensity of puppies

Proportionately, the birds are all leg and neck, with tiny wings incapable of flight, pointed gray beaks, and two claw-like toes. The source of their beauty resides in their feathers—they are born with torsos covered in downy black, caramel, and white feathers. They look like spikey balls of fluff exploring their environment. Steinmetz easily gathers them into the pet-carrying crates and takes them outside.

Steinmetz is a fellow who takes his parenting obligation seriously. Over the course of his career, he’s cared for hundreds of exotic bird species and propagated critically endangered species such as the Micronesian kingfisher and the Guam rail. No surprise, then, that he’s invited his wife, Melissa, and their daughter, Sara, age five, to attend the ostriches initial exercise regime.

Once inside the lawn enclosure, no sooner does Steinmetz release the chicks from their pet carriers than he takes off across the enclosed section of lawn. He’s running fast and hitting the side of his khaki pants to make his car keys jingle. The idea, his wife explains, is to give them a sound to key off, encouraging the chicks to run after him.

And sure enough, they do. One chick is ever so slightly larger than the others with feathers more reddish than brown. “Go, Big Red,” shouts Steinmetz’ daughter. “Go!” A few are distracted by the special food set out for them (ratite starter: chopped green leaves, red clover, mealworms, and live crickets) but eventually all the chicks run after Steinmetz. To and fro, back and forth. Occasionally one flutters his tiny wings, a display of accomplishment and bravado. Then one collides into the path of another but it doesn’t faze them. Within moments, they get back up and start running again, Steinmetz leading the way. Delighted, his daughter cheers from the other side of the chain link fence.

“My daughter fell in love with ostriches ever since we watched The Penguins of Madagascar,”he says after running a few laps.

Ostriches have strong family bonds. “When the chicks are born, both parents will stand over them all day long, spreading their wings to create some shade from the African sun.” The parents stay with their brood for up to 7 months, at which point the young birds are 6 feet tall and large enough to protect themselves.

“Right now,” he adds, “the chicks are about a foot tall and weigh a few pounds but they can grow up to 9 feet tall and weigh as much as 350 pounds.” The legs of a mature ostrich can measure 5 feet tall—more than half its height.

One gathers that ostriches get pretty big, pretty quickly. In about six weeks time, these chicks will weigh about 35 pounds and grow close to three feet tall. “That’s about as big a bird as this enclosure was built to handle,” he says. “Can you imagine if we kept them for ten weeks? They’d be 60 pounds heavy and 4 feet tall.” He shakes his head. “There wouldn’t be enough space for them.”

When that milestone is reached, the ostriches will begin the next chapter of their storied lives at the Sacramento Zoo or another zoological institution. And Steinmetz will bring a new set of chicks up from the basement incubator. The plan, he explains, is to continually rotate in a new batch of ostrich chicks every six weeks or so until late fall or so. “It works in conjunction with the ostrich breeding season, where hens lay eggs from March through October.”