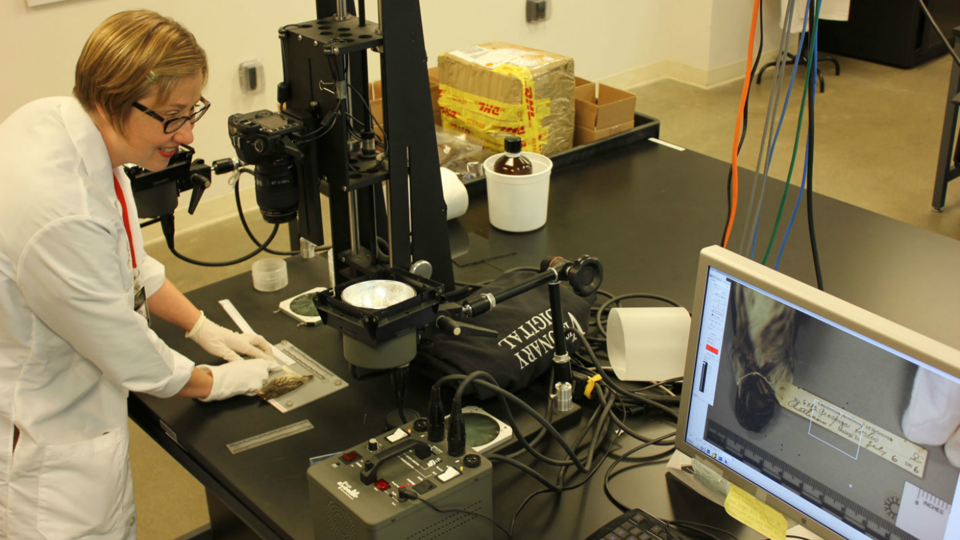 Over the past two years, the California Academy of Sciences has been selecting and photographing a selection of finch specimens collected during the Academy’s 1905-1906 Galapagos expedition as part of Connecting Content grant. The Institute for Museum and Library Services funded grant aims to digitize field books and related specimens and allow for the creation of dynamic linkages between these interconnected materials. We began our project by digitizing the field books created during the expedition which provided a rich picture of collecting on the Galapagos Islands. These accounts allowed us to look inside the personal experiences of the men who for a year and a day lived aboard ship collecting the specimens that now form the core of our scientific collections.

The field books illuminate the fine details of the specimens beyond what the collection tags could capture. These records indicate valuable information such as what the weather was like or the way in which specimens were caught. But the field books were only part of the picture. After collection, all of the specimens from this expedition were retained by the California Academy of Sciences for study.

The finch skins are a heavily used and popular collection, as they represent the species described by Darwin. This collection is not available for loan, not only due to our ongoing research on natural selection, but also because efforts to preserve and support the endemic species of the Galapagos have ended collecting on the islands.

This project aimed to provide a look into the specimen collections and provide researchers worldwide with images to use for study and reference. The California Academy of Sciences is home to 7401 finch specimens collected during  the 1905-1906 expedition, and providing digital access required significant planning. To do this work, we (the Academy’s Library and Archives) teamed up with the Ornithology and Mammalogy department to select a representative sample of over 750 specimens. The selection process was careful and deliberate. Since time and resources were both in short supply, we had to ensure that the specimens photographed for this project showed a representative sample of the diverse traits and characteristics of the birds in our collection. Ornithology researcher Ore Carmi and Collections Intern Logan Kahle took to the task, laboriously opening drawers and making careful observations not only about aesthetic qualities of the birds but also their age, molt, and the season in which they were collected. 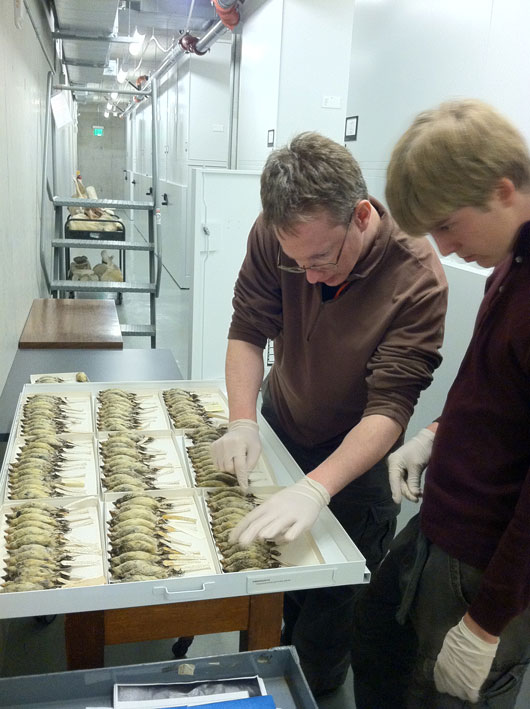 Ore Carmi and Logan Kahle select finches from the 1905-1906 expedition to the Galapagos Islands.

After representative examples of the collection were selected, the finches were photographed in the California Academy of Sciences’ Project Lab, which is a space on the museum’s public floor that allows visitors to see the work we do behind the scenes at the Academy. We are lucky enough to have access to The Big Kahuna, a custom-built digital macro imaging system that allows us to take extraordinarily close-up shots of specimens without sacrificing resolution or depth of field. Our skilled digital imaging assistants took six photographs of each specimen: lateral, ventral, dorsal, and head views, as well as both sides of each collection tag.

These images were then sent through a quality assurance process to make sure that the images were clear, with the relevant information in focus, and that all of the photos were a consistent quality and size. Once all the images went through the QA process and were normalized, they were then sent to join more than 122,800 vetted photos of animals on CalPhotos, which shares images with the Encyclopedia of Life. This process allows diverse users all over the globe to have access to our collections. We are excited to share 4,763 new photographs of Galapagos finch specimens with you and we look forward to continuing to look for new ways to provide improved access to the collections.