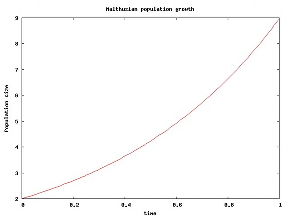 Thomas Robert Malthus (1766-1834) is perhaps one of the most underappreciated intellectual giants of the 18-19th centuries' revolution in Western thought. Malthus lived in an age of revolutions; social, political, economic and, of course, scientific. Malthus is best known for his answer to a seemingly simple question (see An Essay on the Principle of Population): Given a particular birth rate, what is the expected growth of a population? Malthus formulated the equally simple answer based on the observation that population growth is multiplicative, i.e. if the average parent organism produces more than one offspring, then the population will grow exponentially over time (Fig. 1). Malthus then made an important leap, pointing out that the Earth, at least in his day, was not overrun by any particular species, and that this was due to resource limitation. Population size is therefore limited by competition among individuals for limited resources. Later on, Malthus' observations would inspire Charles Darwin's brilliant formulation of the struggle for existence, and the process of evolution by natural selection. Those observations, along with Darwin's (who was as gifted an ecologist as he was gifted geologist and father of modern evolutionary biology), also inspired the 20th century fields of population biology and community ecology. 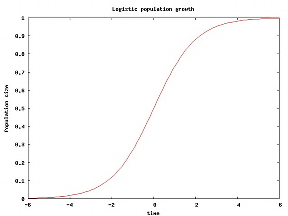 Malthus's speculation was formulated most powerfully in 1838 with the Verhulst logistic equation, which captures Malthus' notion of limited resources mathematically. The logistic equation expresses the limitation or slowing down of population growth as population size increases, predicting that size will eventually reach a stable point which is maximally sustainable given available resources ("carrying capacity") (Fig. 2). In nature, resources may include items such as access to sunlight, water, food, and even sheltered from predators and parasites. The real situation is a bit more complicated, and populations in the wild vary wildly sometimes (see earlier post) but, in general, Malthusian population growth is believed to be absent in nature. Or is it? 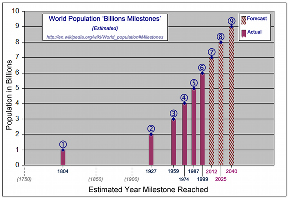 The global human population at the start of the 20th century was approximately 2 billion. Imagine this: since Homo sapiens evolved, say 150 thousand years ago, we have gone from perhaps a few dozen individuals, through wars, famine, plague and natural catastrophes, to 2 billion individuals. By the end of the 20th century, in the span of 100 years, the global population increased from 2 to 6 billion humans (Figure 3). It is clear that humans have violated Malthus' principle. Are our resources unlimited? Hardly. We have continued to be innovative in resource exploitation, and we have also greatly reduced the impact of limiting factors such as predation an disease. Is Malthus now irrelevant as far as humans are concerned? Hardly. The single root cause of all our environmental problems, and many socio-economic and political ones as well, is population growth. The reluctance of many, including environmentalists and champions of good causes, to acknowledge this is nothing short of astounding. Reducing the per capita carbon footprint will be meaningless in the long-term if we have 10-12 billion humans on the planet by the end of this century.

I would like to explore this issue of population growth on the blog. The next several posts will raise some of the questions on my mind, but it is clear that this is a very complicated and sensitive issue. I invite readers to join in the conversation, and to participate with comments and questions of their own.