The Articulation of Orca O319: Questions from our Visitors

May 17, 2013
Birds and Mammals Research
by Laura Wilkinson 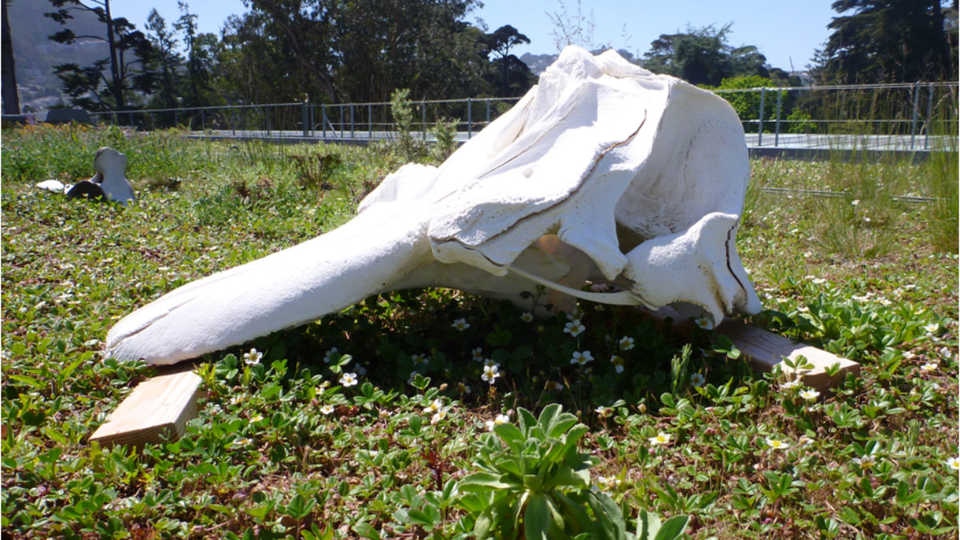 The skull of Orca O319 on the roof of the Academy. Image: Laura Wilkinson @ California Academy of Sciences

We’ve been getting some great questions from our visitors about Orca O319 and Orcas in general. Here is a sampling of the questions we’ve gotten, along with our answers:

What does “Orca” mean?
The scientific name of Orcas is Orcinus orca: “Orcinus” means “kingdom of the dead” or “belonging to Orcus” (a Roman god of the underworld), and “orca” was the name that ancient Romans gave these animals, possibly borrowing it from a similar greek word which referred to a whale species.

How big is the Orca’s brain?
Roughly four times larger than a human’s brain.

How much did the Orca weigh?
The skull alone (bones only, no flesh) weighs 72 lbs, closer to 85 lbs with the mandibles (lower jaws). We don’t have an exact weight for our Orca before we began the necropsy, but adult Orcas can weigh between 5,700 and 16,000 lbs. At birth, Orcas weigh 350-500 lbs. O319 was not a fully grown adult, so he probably weighed on the low end of average adult weights.

Have there been any bleaching agents applied to the bones?
The bones all soaked in dilute sodium perborate, which is a powder that release hydrogen peroxide when mixed with water. The skull was placed on the roof of the Academy for one month to allow the sun to naturally bleach it. Being in the Piazza will likely bleach the bones further, as they’re exposed to ultraviolet light. We don’t use actual bleach, as it degrades the bones.

How long will it take to put the skeleton together?
We will be articulating the skeleton from May 8th through June 9th (1 month). After that, staff members from Ornithology and Mammalogy will work on finishing touches. The entire skeleton should be done by the end of June.

Does the Orca have a name? Will we name it? Our Orca is referenced as O319, its scientific identification number. We will not give it a personal name because it is a research specimen. It will always be O319.

Are Orcas seen specifically in this area?
There is currently a pod of transient Orcas in Monterey Bay, seen hunting different species of marine mammals (sea lions, elephant seals, harbor seals, dolphins, porpoises, and gray whale calves). A pod of Orcas has also been seen in the Gulf of the Farallones in the past.

What will we be using as “cartilage” on the skeleton?
We will be using silicone.

How do we attach the bones together?
We will be using a variety of metal rods, glues, and wires to articulate the skeleton.

If you have a question about the articulation process or about Orca O319, leave a comment or come visit us at the Orca Lab Tuesdays through Sundays!

All marine mammal stranding activities were conducted under authorization by the National Marine Fisheries Service through a Stranding Agreement issued to the California Academy of Sciences and MMPA/ESA Permit No. 932-1905/MA-009526.