Casual Sunday birding in Golden Gate Park... With the camera

Well, it's a sunny Sunday in Golden Gate Park.  The weather was warm and pleasant, and the winter birds were active.  My wife Tiffany and I took a stroll up the hill and into the park near Lloyd Lake, where there are often plenty of ducks, gulls, coots, and even a grebe or two.  I had my camera with me since I needed a little practice using my long lens on birds. Although none of these are great photos, they show some of the common species that you can see here in the park: 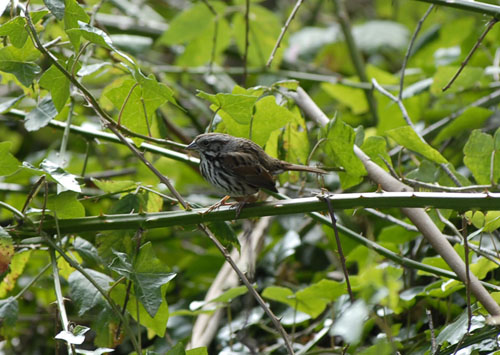 A couple Song Sparrows (Melospiza melodia) were skulking in the underbrush near Stow Lake.  They are difficult to see, but have a very distinctive pattern of banding on the chest which come to a spot in the center. 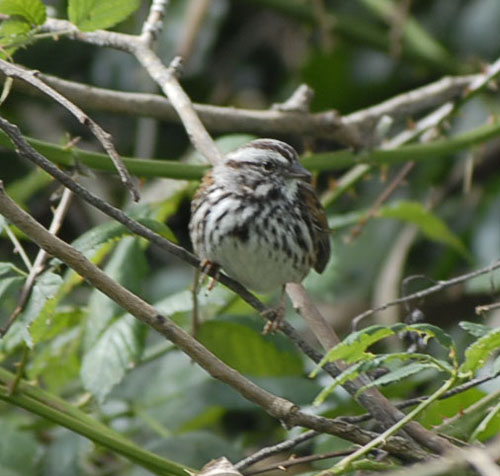 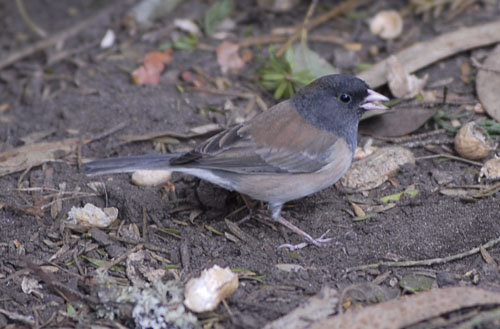 And of course, the Dark-eyed Juncos (Junco hyemalis) are common around many footpaths.  This junco was in a group of 4-5 others and feeding on bread and bird feed scraps left on the ground by some earlier hikers.  The Song Sparrows were also with them, but the sparrows were more skiddish and more quickly jumped into the thicket behind them while I got these photos. 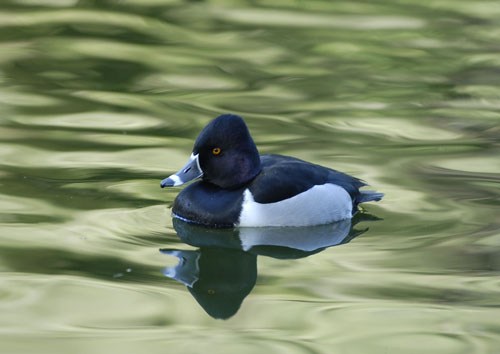 Several Ring-necked Ducks (Aythya collaris) have been hanging out in Lloyd Lake, near the 25th Avenue north entrance to the park.  Although the Mallards are still slightly more abundant, the Ring-neck Ducks have been common here this year with over 20 in the lake today. 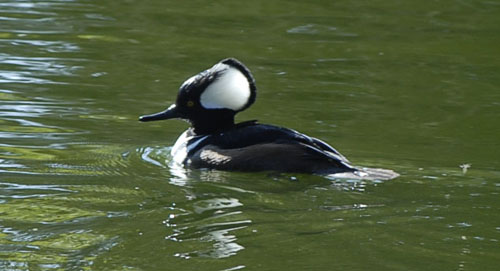 The Hooded Mergansers (Lophodytes cucullatus) were my favorite sighting today.  They are always very spectacular (the male is above), and are great divers.  We often see a pair here on Lloyd Lake, and today there was one male and two females.  The male was pretty cheeky, and allowed us to get a pretty close look and some decent photos.  He aggressively chased two male Mallards away from a patch of weeds where he was diving, despite the fact that he was only a fraction of the Mallards' size. 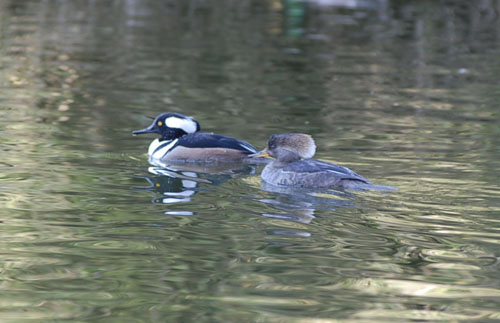 Here is a male Hooded Merganser swimming alongside a female.  They stayed closely together most of the time. 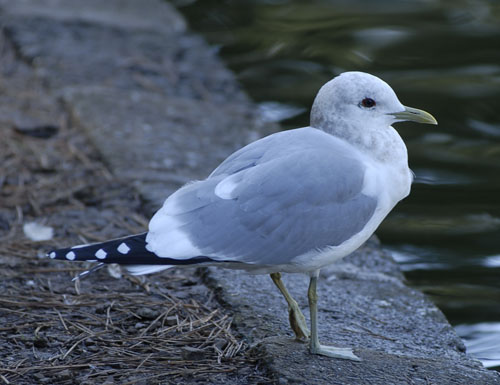 I was surprised by how few gulls I saw this morning.  Lloyd Lake is a great place to see Mew Gulls (Larus canus) this time of year, and we got great looks at several.  They are smaller than the Ring-billed or Western Gulls, and have almost no visible marking on the bill. 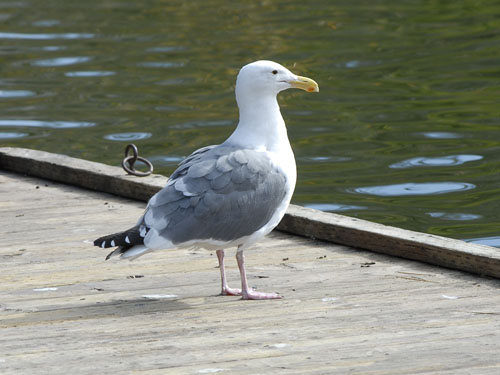 The much larger Western Gull (Larus occidentalis) was also present (although I took this photo on the Stow Lake boat dock).  These tend to be a little more aggressive than the Mew Gulls, and they respond quickly to the many people who bring bread to feed the ducks. 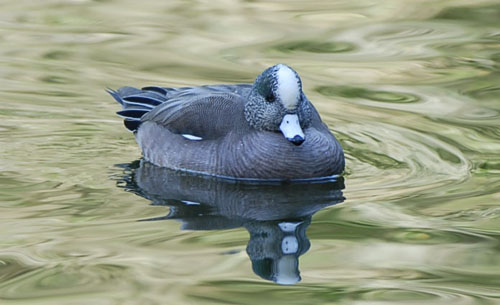 My wife Tiffany told me that there were Widgeon here too, and this is one of the reasons that we walked up to the lake.  Here is a male American Widgeon (Anas americana) in non-breeding plumage, with the obvious white forehead.  There were only about 3-4 pairs, but they too were relatively easy to see and came pretty close. 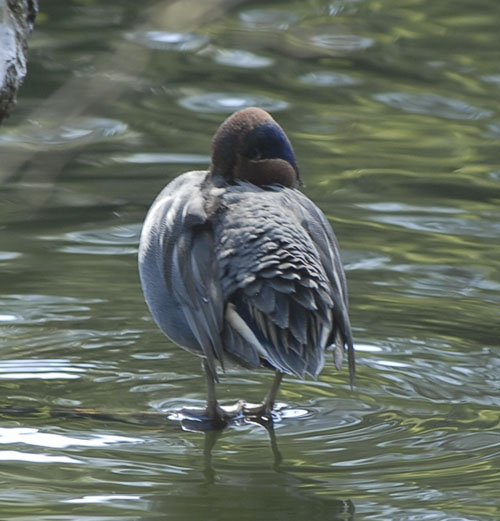 We looked for the Wood Ducks (Aix sponsa)  that we often see on the western side of the lake, but we failed to spot them today.  I still haven't photographed them, and I was hoping to get a nice photo of their head pattern in the sun.  Instead, we saw a lone male Green-winged Teal (Anas crecca) sleeping with its bill tucked into its back feathers. 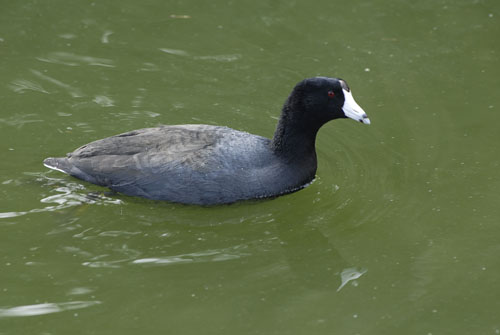 American Coots (Fulica americana) were common on all of the bodies of water in the park (as usual), 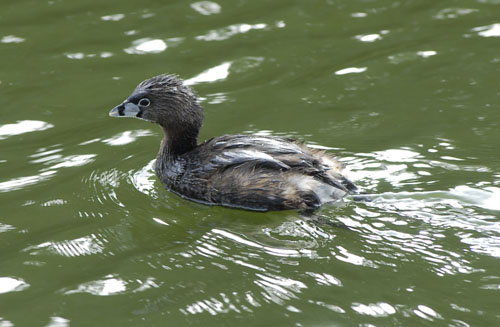 And we got great looks at Pied-billed Grebes (Podilymbus podiceps) on both Lloyd Lake and Stow Lake. 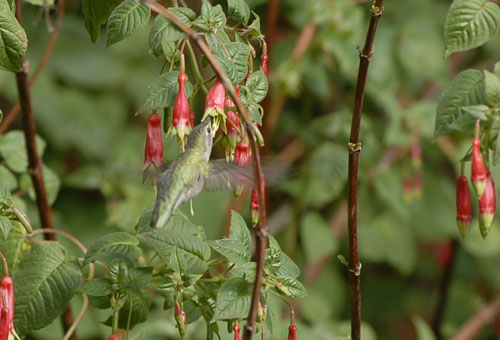 Last but not least (unless you are talking about size) were Anna's Hummingbirds (Calypte anna).  We saw several out servicing the flowers.  I understand that the Academy is working on upcoming pollination exhibits which will most certainly feature hummingbirds.  Anna's Hummingbird is a year-round resident that survives well on the parks many flowers, which provide a great source of nectar and pollen.

Another unphotographed highlight would have to be the California Quail (Callipepla californica) that we heard just north of Lloyd Lake.  As we approached the lake, we could hear some scraping in the underbrush, but I was unable to see what was in there.  I figured a junco, towhee, or even a squirrel, and walked on without working too hard to see it.  But later, when we were across the lake, we heard multiple clear "Chi-ca-go" calls of California Quail.  We walked back hoping to photograph one, but alas we were unable to see or even hear them again.  The quail are noteworthy, as I learned at a recent Golden Gate Audubon Conservation Committee Meeting, because California Quail were all but extirpated from the city limits.  There are believed to be only a single family group or "covey" that still lives around the Botanical Garden and Arboretum.  At first I suspected that this could be the same group that had just moved deeper into the park.  But as we walked toward the Academy, we heard another group of quail at the northeast end of Stow Lake - just across Martin Luther King Drive from the Arboretum.  I would still like to get a good look at the covey at Lloyd's Lake, but it is tentatively great news to me that there may be another group settling there.

Why are the quail disappearing in the city?  It is believed that off-leash dogs are probably the major threat to ground-nesting birds in the city.  As the population rises and as people in the city want dogs for companionship, the impact on ground nesting birds is increasing.  Dogs are also a huge threat to shorebirds - especially the endangered Snowy Plover (Charadrius alexandrinus).  So please do your part and keep your dog on a leash unless you are in a designated off-leash area!

It was nice to get the camera out and shoot a few of the common local species.  In just a couple weeks, Gary Sharlow and I will be taking a group of photographers to Crissy Field to teach and practice some tricks for photographing birds in the field.  This will be a part of the adult programming that Gary has been developing, and a potential source of data and images for citizen science projects.